Wardell-Armstrong Archaeology Reports of development at Town Farm, Heddon on the Wall (2014-2020)

This work was undertaken as part of a pre-planning assessment prior to a proposed redevelopment programme, which will consist of the demolition of existing buildings and the construction of a new housing development and associated infrastructure.

The site is located within area of high archaeological sensitivity, being partially situated within the Frontiers of the Roman Empire World Heritage Site, which includes the Hadrian's Wall Scheduled Monument and Vallum (SM 26086). As a result of the site's location, Scheduled Monument consent had to be obtained and the project had to be carried out under guidance from Mike Collins, Inspector of Ancient Monuments (Hadrian's Wall) for English Heritage.

The archaeological evaluation was undertaken over two days between the 8th and 9th December 2014. The evaluation involved the excavation of seven trenches, five of which measured 10m in length and 1.6m in width, with a further two trenches measuring 3m2.

No evidence for Hadrian's Wall or any of its associated features were observed during the archaeological evaluation, suggesting that the wall has been completely destroyed at this point or that the actual route of the wall falls outside of its present projected line.

All trenches were excavated beyond the maximum proposed depth of 1m of the cable trench.

No archaeological remains were positively confirmed within the works area; however, several deposits may have some relevance to the possible location of the ditch to the north of Hadrian's Wall. 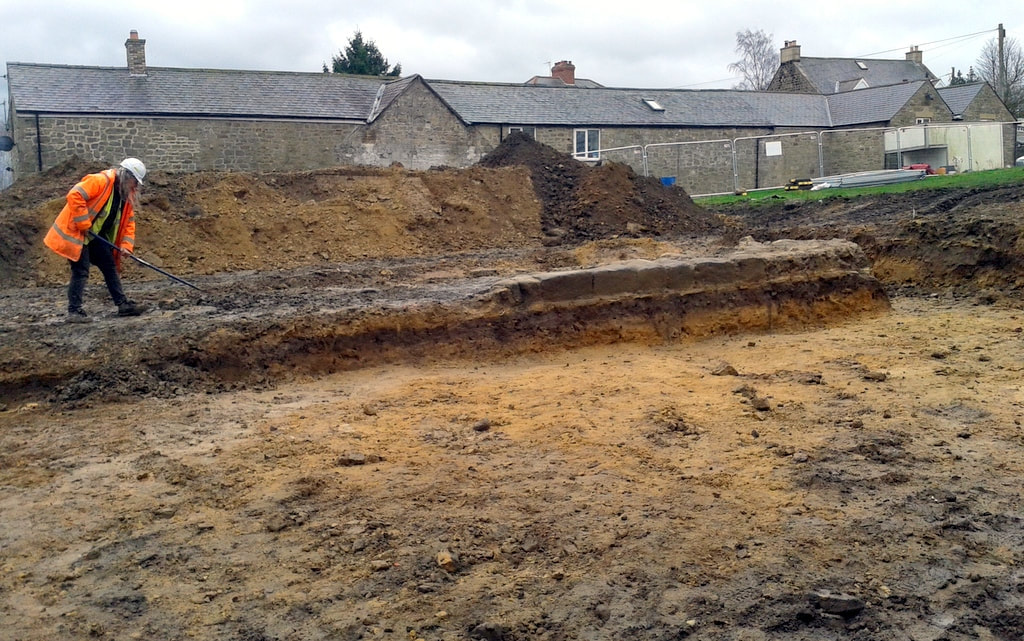 Archaeologist clears soil from eastern section of the rubble core of uncovered section of Hadrian's Wall. Facing stones of the lower course only found on the N side, to the right of the photo. A Curtis (2019).
Wardell Armstrong were commissioned to undertake a Watching Brief on land at Tulip Mews, Heddon-on-the-Wall, Northumberland. During the Watching brief substantial remains of Hadrians Wall and a Medieval corn dryer were recorded and these led to targeted excavations.

Johnson, E. (2020). Tulip Mews, Heddon-on-the-Wall, Northumberland. Wardell Armstrong Archaeology.
Link
I have extracted parts of the report below (please see link above for full pdf copy.
Archaeological remains were identified with the foundations of Hadrian’s Wall located centrally within the site and a medieval stone‐lined kiln and the southern edge of the probable Wall ditch identified within the north‐eastern corner of the site. Although the development site is located within a partially scheduled area on the projected line of Hadrian’s Wall and its associated defensive ditch, the survival of remains associated with these features was somewhat surprising as a preceding evaluation undertaken during 2014 did not reveal any archaeological remains. However, the watching brief phase of work has revealed that the trenches were either located off the actual line of the Wall and Wall ditch, or within areas where the Wall did not survive or was so poorly preserved that the remains were indistinguishable from the surrounding fragmented bedrock. Even so, it does serve to highlight some limitations of trial‐trench evaluation.
The remains of Hadrian’s Wall identified at the site measured c.20m in length and comprised facing stones laid on a foundation of flat sandstone slabs, with a core of irregular sized sandstone fragments set in puddled clay. The Wall survived to a maximum height of 0.45m and was 2.9m at its widest surviving point. The width of the surviving remains is consistent with the Broad Wall sections of the monument, which was originally designed to be 2.9m wide (Symonds & Mason 2009, 38; Table 2). It is also consistent with the surviving extant section of the Wall located to the east of the
site (NHLE 1010616) which measures between 2.8m and 3m in width. 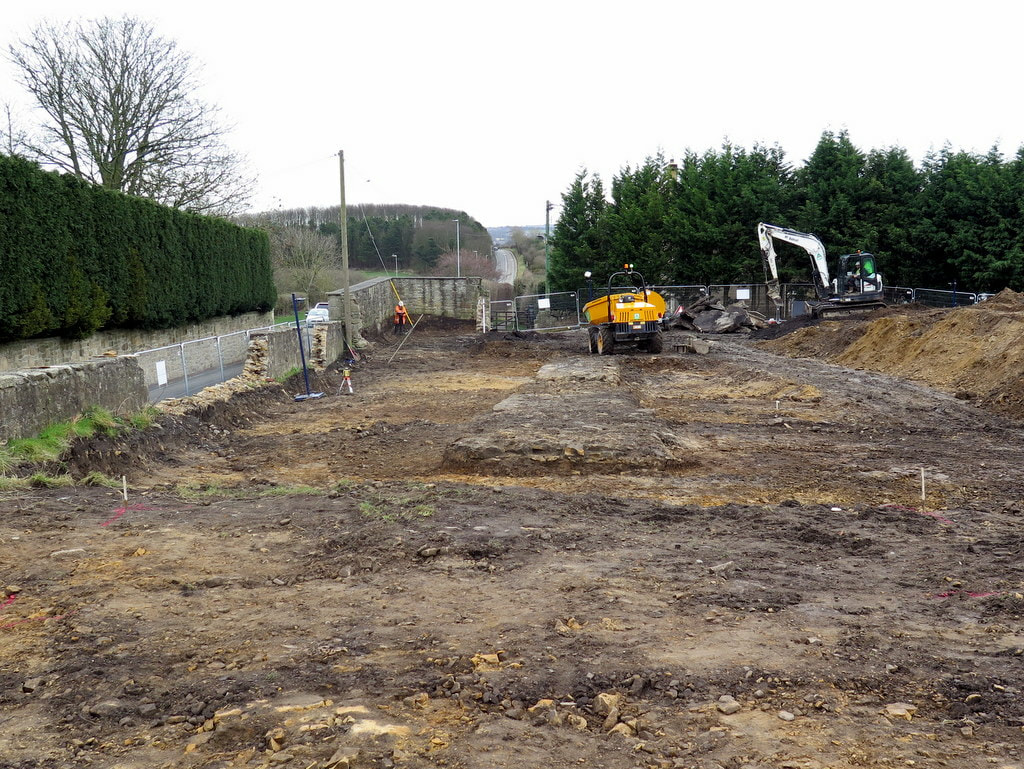 View E along line of newly uncovered section of Hadrian's Wall. In the distance is Hexham Road climbing over Great Hill on the way to Throckley. The conserved section of the Wall is located to the right of the road. Photo A Curtis (2019).
Although a large section of the Wall survived within the central portion of the site, no traces of the monument were identified to the west or east. This may not be surprising however, as it was noted that the bedrock was extremely shallow within the western part of the site, suggesting that significant ground reduction had previously occurred, and that there was a greater level of disturbance associated with the former haulage yard within the eastern part of the site. The Wall had also clearly suffered some truncation during the construction of the farm buildings. Ironically, it appears that the location of these buildings aided the preservation of this section of the monument.
The identification of the probable Wall ditch adjacent to the northern boundary of thesite is also significant, although there was some uncertainty as to whether the feature actually did represent the remains of the northern defensive ditch or simply the foundation cut for the former diesel store/boundary wall. However, there are several reasons to suspect that the feature identified on site was indeed the southern edge of the Wall ditch, not least because it is was situated on the projected line of the defensive feature. The ditch was clearly not associated with the construction of the diesel store as it continued under both the eastern and western walls of the building without following the line of these return walls and was far more substantial than required for the extant structure. In addition, the fill of the proposed Wall ditch had been cut by a near‐vertical sided feature, likely the actual foundation cut for the northern wall of the diesel store/site boundary.
Further potential evidence for the presence of the Wall ditch was identified during the associated trial‐trench evaluation within the Military Road, immediately north of the site boundary (Appendix 5). One of the evaluation trenches clearly demonstrated that the sandstone bedrock had been cut by a substantial feature, whilst the other two
trenches revealed deposits which were clearly not natural, one of the which was very similar to the silty clay fill of the proposed Wall ditch identified within the site boundary. It is likely that the Wall ditch remained a substantial visible earthwork within this part of the landscape, certainly until the creation of the Military Road.

Accepting that the linear feature identified within the site boundary was the Wall ditch, this would give a distance of approximately 7.5m between the ditch and the Wall itself. This is slightly more than the standard 6.1m width of the northern berm between the Wall and defensive ditch (Symonds & Mason 2009, 45), although the greater truncation observed within the eastern part of the site likely accounts for the increased distance between the two features.

Apart from the Wall and the Wall ditch, no additional features associated with the Hadrian’s Wall system were identified. Although additional defensive features north of the Wall, such as cippi pits (e.g. Frain et al 2005) and a small bank on the southern lip of the ditch (Symonds & Mason 2009, 45) are well recorded within the area, it is
likely that extensive truncation at the site removed any evidence of such features.

Similarly, no evidence for Milecastle 12 was identified, which has long been suspected to be located within the immediate vicinity of the site (Peters 2014). However, if the Milecastle was once located towards the western extent of the site, it is likely that any evidence of the structure was completely removed during later phases of activity as has previously been noted (Collingwood Bruce 1966, 59).

In addition to remains ssociated with Hadrian’s Wall, the watching brief also identified a well preserved stone‐lined kiln with associated fire pit and flue. The kiln was initially considered to be associated with the Roman activity at the site, but the recovery of several sherds of medieval pottery from the feature (the only medieval pottery recovered anywhere during the watching brief) and its location on the northern side of the Wall has highlighted that it relates to a later phase of activity, probably the 14th or 15th century. Apart from the recovery of oak charcoal, primarily
from the fire pit, no indication of use of the kiln was identified, although it is possible that the feature was used as a corn‐drying kiln similar to the medieval kiln built into the extant section of the Wall immediately to the east of the site.
Significance
The identification of a previously unknown section of Hadrian’s Wall is significant and demonstrates that the well preserved remains of the monument can still survive, even in areas of significant later disturbance. Also of significance was the survival of the proposed Wall ditch, although the interpretation of this feature is slightly more
tenuous than the Wall itself, and the remains of a medieval stone‐lined kiln at the site.

The latter feature in particular adds further evidence of how people interacted with the monument beyond the Roman period. The results of the archaeological watching brief will therefore add to our knowledge regarding this internationally significant monument. 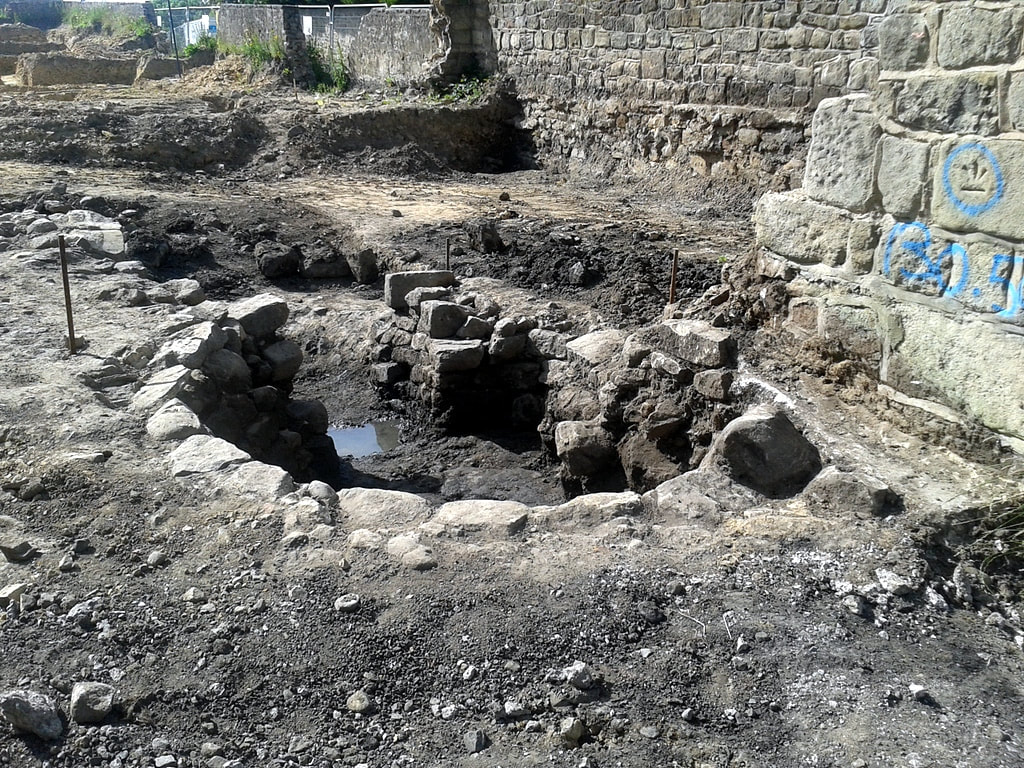