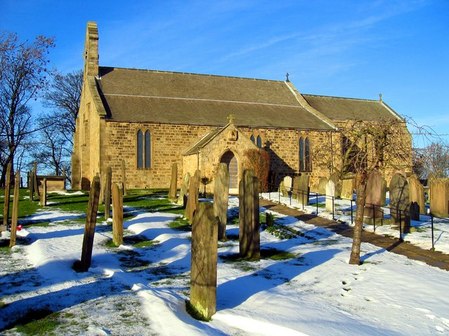 Image © Copyright Andrew Curtis
and licensed for reuse under this Creative Commons Licence
The Church of St Andrew is situated in the centre of the village on a hill top opposite the Swan Inn. The church was consecrated in 630 and still retains many Saxon and later Norman elements.

Nikolaus Pevsner called it  'a church of considerable archaeological fascination'.

The parish church has been an important part of village life since these times and is still in use for regular worship to which all are visitors are very welcome. See details here.

The earliest readable dated gravestone in the churchyard is 1724. A list of the monumental Inscriptions of the Church and Churchyard can be found here.

The parish church of St Andrew's has been added to over the years. Some of the building dates back to about 680 AD, when Northumbria was a separate kingdom.

The oldest parts of St Andrew's are still visible in some of the walls of the chancel behind the choir stalls. Though much repaired, experts date them 600-800 AD.

From the outside of the church, looking at the south wall of the chancel, there is a blocked door-head, (A on the plan) with a semi-circular door-head in solid stone, a good clue to Saxon architecture. A corner of the nave of the old Saxon church is built up alternately of short stout stones and long stones on end (B on the plan). This is certainly ancient and is Saxon 'long and short work'.

Also from the outside of the church, looking at the east gable of the south aisle (C on the plan), you can see two sloping lines showing former roof levels. From the inside of the church you can see the aforementioned blocked doorway, with a slightly different head. About one metre above it and to the right, there is a large stone on end that marks the position of a typical Saxon window (E on the plan).

There is a similar stone in the north wall. Over the vestry door is another semi-circular door-head (F on the plan).

The dedication to Saint Andrew is a further clue of an early date. Andrew was the favourite saint of Wilfrid, bishop of Hexham. Five churches on Tyneside were dedicated to him:
They are probably all contemporary.

The early Saxon church would have been small and narrow, like the present choir space area, with a nave only half the present length, and a semi-circular apse at the east end.

The Saxon church stood for about 500 years. 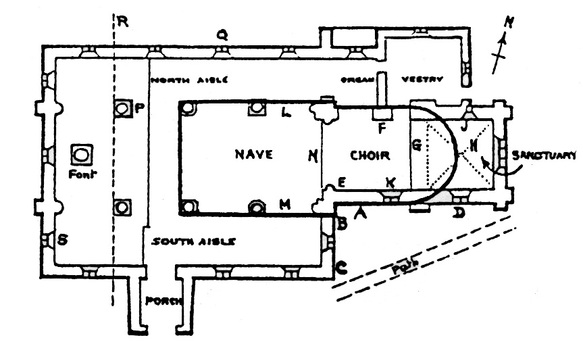 Shortly after the foundation of Blanchland Abbey, in 1165, the monks were given land around Heddon by Walter de Bolbec, and became responsible for its church.

Further extension work was carried out. The eastern apse disappeared, and in it's place was built the present sanctuary. In the arch between choir and sanctuary, the crossed vaults (H on the plan) are supported on short pillars at their four corners; these form a stone canopy over the 'holy of holies'.

In the north wall is an original Norman window (J on the plan). The stone cross displayed below it is probably an early 11th century grave cross. The much larger windows to east and south are later insertions. There is probably part of the lid of a stone coffin set in the sill of the second window on the south side (K on the plan). It was found under the floor of the church in 1937.

The extension was completed by the addition of the third bay of the nave, bringing the west wall of the church to the line (R on the plan). One reference dates the porch at 1392, so the extension must have taken about 200 years to complete.

The internal appearance of the church would then, be very similar to what it is today, except that the roofs of the aisles would be much lower, and the windows tiny or non-existent.

Though much of the work would be financed locally, and done with local labour, a great deal is owed to the 'white canons' of Blanchland. Their contribution is acknowledged by the inclusion of a picture of the abbey church (now Blanchland parish church) in the St Andrew's window at the west end of the south aisle (S on the plan).

After the dissolution of the monastery at Blanchland in 1539, the right of choice of vicars of Heddon passed to the Crown, and subsequently to the Lord Chancellor, who is the present patron. A list of vicars from 1296 is displayed in the porch. Registers and other documents from 1656 are in the custody of the County Records Office.

Gravestones in the churchyard go back to 1724. 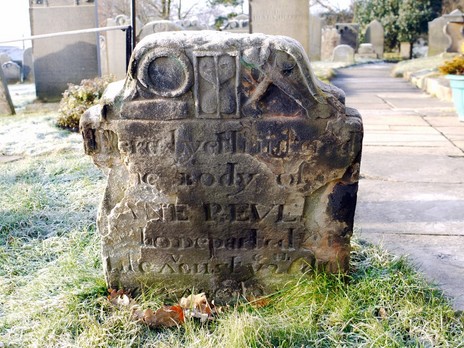 The next major work was the insertion of new windows in the north aisle in 1839. This is the only date on the building (Q on the plan). Over the three windows are the initials of the vicar, J. A. Blackett. Between 1841 and 1845 the fourth bay was added to the nave. This involved removal of a wooden musicians' gallery with vestry beneath, which stood at the back of the third bay - a slanting mark of the original staircase can be seen on the pillar (P on the plan).

The present vestry was built about 1866. Further improvements between 1873 and 1877 included the staining of the east window, provision of a new altar, choir stalls and pulpit, and the installation of the organ, built by Bevington & Son of Soho, Birmingham. A new organ chamber was built between the north aisle and the vestry.

The east window, enlarged in 1841 and stained in 1873, is a 'Jesse window', a family tree in glass, showing the decent of David and Solomon, and ultimately our Lord from Jesse, the old man at the foot of the middle lancet. It is attributed to C.E. Kempe.

The remaining stained glass is of interest, not only for it's quality, but because all thirteen windows were stained at one time (1921) by the gift of Sir James Knott. Twenty-nine saints and others are depicted, all in similar style. To achieve this uniformity seven stained glass windows were removed: the memorial inscriptions and the saints depicted were incorporated in the new designs.

In 1910 gas lighting was installed in the church to replace the existing oil lamps. The gas lamps were replaced with electric lighting given by the Robinson family in 1936, in memory of Colonel Ernest Robinson of Heddon Hall..

In 1937 the church was re-floored, refurbished, reseated and a new central heating boiler was installed. This proved to be a larger job than originally anticipated due to subsidence and dry rot. The pews, from Newcastle Cathedral, were given by Lady Elizabeth Knott in memory of her husband . A new boiler, which could be fired by either coke or oil, was installed in 1959. 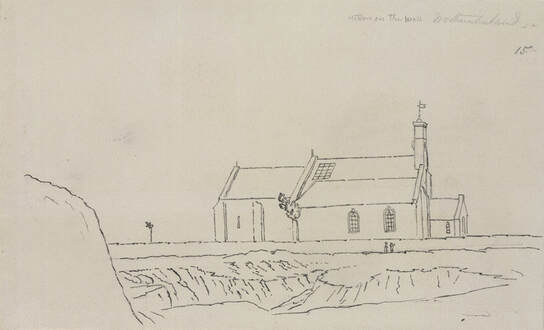 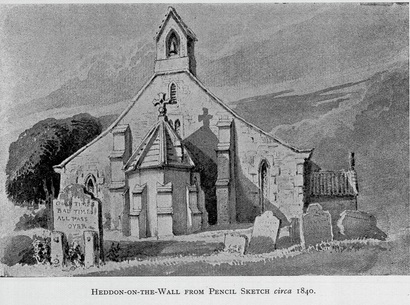 St Philip and St James share the same saints' day of May 1 and is a more likely combination for a double dedication. This dedication remained until 1886, when it was restored to St Andrew.

Northumberland Communities - Heddon on the Wall 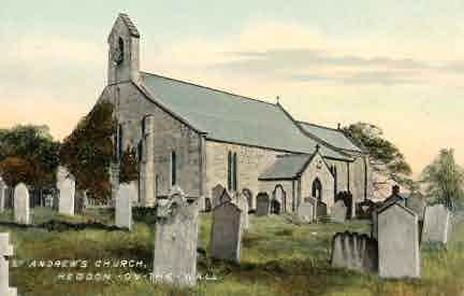 From No.4 April, 1888 - Origins of Heddon on the Wall
Heddon on the Wall consists of the six townships of Heddon on the Wall, East and West Heddon, Eachwick, Whitchester, Houghton and Close House. It has been shown with great probability by C.J. Bates, Esq., that the first-named of these is the place referred to in the history of the Venerable Bede under the appellation of "Ad Murum".

If this be correct Heddon must have been a place of some note, as the seat of the court of Oswry, King of Northumbria. Here were baptized by Finan, Bishop of Lindisfarne, two Saxon princes, Penda of Mercia and Sigebert of Essex; "so that this spot has the honour of being the spiritual birthplace of two southern princes, both of whom became the means of introducing Christianity into their own dominions." If a church existed here in those early days (the middle of the 7th century), it was most likely built of wood and covered with thatch.

The present church stands on an eminence 425ft above sea level. The eastern portion is evidently of ancient date and architectually very interesting. It is divided into two parts by a well-cut zig-zag arch, curiously flattened in the centre. The eastern bay of the chancel is covered by a groined roof, and is one of the very few specimens of this kind of archictecture now left in the north of England. This chancel was erected, it is supposed, about 1120, and at first constituted the whole church. "It would appear, however, that, towards the year 1200, an enlargement became necessary, and a nave was built, with, in the first instance, a north aisle only.

After some years the south aisle was added, and the existing chancel arch and south windows are of the same date." About 45 years ago the church was further enlarged to its present dimensions. The church is well worthy of a visit by those who are interested in ancient ecclesiastical architcture, and also by those who like to see proofs of the long existence of the Church in our land.

From No. 10. October, 1890 - Church Choir Outing
On Saturday, September 13th, through the kindness and liberality of C.J. Bates, Esq., of Heddon Banks, the Church choir had a most delightful excursion to Langley Castle. The Route taken was via Ridley Hall and Planky Mill, where a splendid luncheon was provided and games indulged in.

The Castle was reached about 5 o'clock and after looking through the building the whole party sat down to tea in one of the Spacious rooms. The weather was all that could be desired, and a most enjoyable day was spent.

The Parish Church of St Andrew, Heddon on the Wall
Analysis of the Fabric and Archaeological Assessment
by Peter Ryder (November 2006) 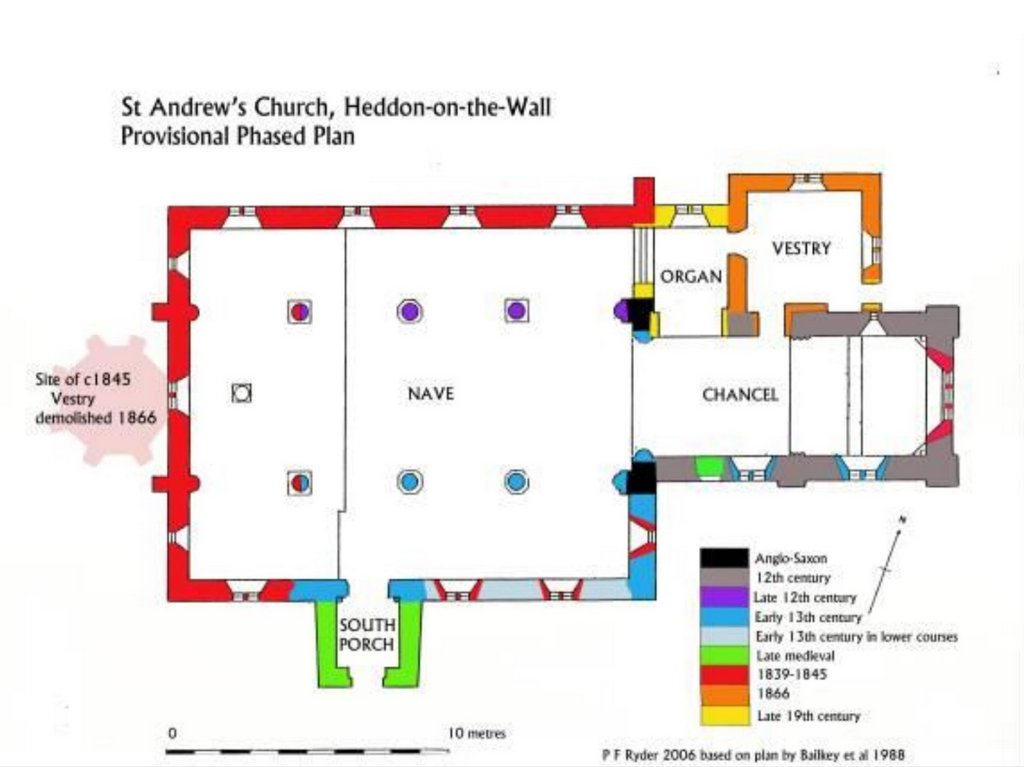