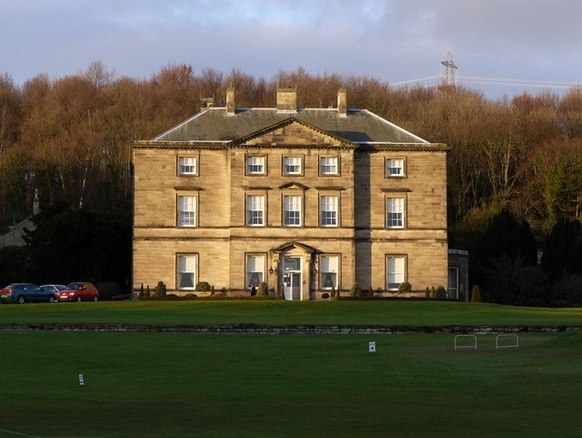 Close House, Heddon on the Wall (2009)
Photo © Copyright Andrew Curtis and licensed for reuse under this Creative Commons Licence

The area of Close House was probably occupied since at least the thirteenth century but the present house dates only from 1779. The name was originally thought to be Albery Close, which became corrupted as Abbey-le-Close, and gave rise to the belief that it was formerly the site of a monastic house. There was a chantry here though, first referred to in 1313, whose patron was one John Turpyn, the son of Richard Turpyn (Turpin) of Whitchester. The old chapel was pulled down in 1779 when the present mansion was built.

Close House estate was originally owned by the Radcliffe family, and it passed to the Read family at some time between 1412-24. It was sold by the Reads to Robert Bewicke in 1620 and became the seat of the Bewicke family, who lived there for the next 333 years. Robert Bewicke was a Merchant Venturer who was made Sheriff of Newcastle in 1615 and Mayor of Newcastle in 1628 and 1637. His descendants were also Mayor's of Newcastle, High Sheriff's of Northumberland, and MP's.
Close House mansion was built in 1779, and the estate covered an area of 606 acres of land and 11 acres of water.
Plan of part of Close House (c1794) seat of Calverly Bewick, engraved by Beilby and Bewick, with view of mansion house. Shows the proposed route of the Newcastle to Carlisle Canal. SANT/PLA/3/1/6/1 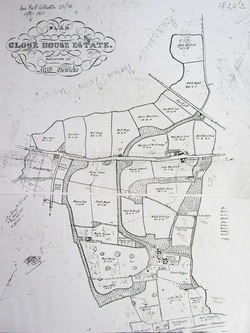 In 1906, Close House was leased to the Knott family, for a period up to 1929 when Sir James Knott moved to Jersey.

The Bewicke family returned to Close House in 1929, until the outbreak of war in 1939. During the war, evacuees occupied Close House for a period and the house was used as a Nursing Training College. The Champagne Bar and Lounge were used as the bandaging room, the Ballroom the canteen, and the first floor rooms were dormitories!

After the war, the house had a spell as a convalescent home for Newcastle General Hospital, a home for backward children, and a nurses' training centre.

In 2004, the University sold the whole Estate to local business man, Graham Wylie, who reopened it as a hotel and golf venue in 2005. The years between 2009-2011 saw development of a new championship golf course (taking in fields surrounding the estate), a golf driving range and a new club house overlooking the former fish-pond.

The house was built in 1779 for the private use of the Bewicke family. However, its history dates back to the early thirteenth century.

During the thirteenth and fourteenth centuries there is evidence of a Monastic House at this site being owned, at that time, by the Read family. The property remained in the hands of the Read family for several generations until George Read eventually sold the site to Robert Bewicke in 1626

Robert Bewicke was a merchant adventurer and was made Sheriff of Newcastle in 1615 and Mayor in 1628 and 1637. He began the long association of the Bewicke family with Close House. In 1779 it was decided that a new building was required and the present Close House Mansion was built, hence the logo showing the date of 1779, tied in with the University of Newcastle’s lion. It is a Georgian style house with a balanced and symmetrical layout, of two and a half storeys,with five bays to the front and the two adjacent sides. The front aspect, the southern, has a slight three bay projection with a pediment and ionic columns supporting the doorhead. The old Monastic House was pulled down to make way for the new building, and the large bay window in the Bewicke Room marks the site of where it stood all those years ago.

It is thought that Close House was designed by the Newcastle architect, William Newton, and there is evidence that a much more ambitious landscape was planned including, apparently, an ornamental canal.

The Rococo Room, aptly named after the style in which it was decorated, was in the days of private ownership, the music room and musical motifs can be seen on some of the ceiling panels. It is said that the work in this room was created by Italian craftsmen. The conservatory to the west of the house is contemporary with the house and also has 5 bays, with Tuscan style columns.

The grand fireplace in this room bears bears a monogram of CMB, possibly that of Calverley and Mary Bewicke. Calverley is thought to have been the great, great grandson of Robert Bewicke. It is unsure to what extent he changed the Mansion House, but obviously changes were made for a fireplace of this size to be installed.

The Bewicke family remained at Close House for many generations. However, wealth was dwindling and by the early part of the 20th Century the property was mortgaged. The finances of the Bewicke family never regained their original strength so, inevitably, much of the surrounding property was sold off between 1945 and 1953. This included Stephenson’s Cottage, High Close House and Heddon Quay.

Finally, the Mansion and Estates were sold at auction in 1953 and bought by James Rutherford and Sons for the sum of £13,190. In 1960 he approached King’s College, Newcastle, with the possibility of purchasing Close House. The asking price was now £20,000! A sale price was agreed at £19,500 and the sale proceeded. At this point in time, King’s College was part of Durham University but became the Independent University of Newcastle upon Tyne in 1963.

In 1994 Close House Mansion was extensively refurbished at a cost of just under £1,000,000 and today is a very successful Day Conference and Banqueting Centre offering a wide range of facilities from Summer Barbecues to Christmas Party Nights, Civil Marriages and Wedding Receptions to Corporate meetings and Social Event.

A memoir of the Rev.John Hodgson, vicar of Hartburn
by James Raine (1858)

The situation of CLOSE HOUSE is extremely good. The hill of
Heddon rises rapidly behind it on the north, from the rude visitations
of which it is also well defended by a very fine grove of trees. Indeed
the trees to a good distance around the house, as well in groves as single
in the inclosures, are very beautiful: they are healthy, finely formed,
large and luxuriant; but in some places very fine oaks have had larches
and other annoyances planted under and beside them, very injudiciously.
The prospect from the house down the river is extensive. Gateshead
Fell and its cottages and villas glitter and impart life and cheerfulnesss
to the distances, without the inconveniences its population brings to
places nearer it. Then the busy traffic on the Tyne, the smoke of
various manufactories, and the steam engine, in all directions, sublimi
anhelitu, performing its stupendous labours, are too distant to be any
real abridgment of comfort, while they raise ideas in the mind of the
immense wealth and industry to which our country has arrived within
the last fifty years. The house was built by the late Mr. Bewick’s
father from designs by         , but though it is of good masonry,
good stone, and I am told very convenient and comfortable within, the
style of the exterior of the building is very bald. There are too many
windows; the house is nearly square, and too high for its width. But
it has near it a          , which has tresses to the earth, and in size and
flowing luxuriance has nowhere in the North a rival. It was to-day in
full flower: but for May in the North of England this day, and several
days that have preceded, were uncommonly fine. The prospect over
the horizon to the south has a bad outline, but nearly to the tops of the
high grounds it sparkles with farmhouses and villages.