Heddon Hall was advertised for sale by Sanderson Young in February 2012 described as a 7 bedroom detached house at a guide price of  £1,800,000. 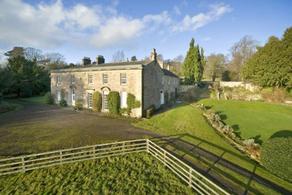 Heddon Hall is believed to date back originally to the early 1700s, although evidence of a settlement in this location is available before this time. The estate was purchased by the current owners in 1932 and we are now delighted to offer for sale the principal hall, the caretaker’s flat, three cottages and an arrangement of outbuildings which show great potential for two or three more homes to be created. The hall and its properties are surrounded by beautiful gardens, grounds and woodlands, which extend to circa 41 acres. A majestic tree lined avenue with delightful hedgerows leads down the northern banks of the River Tyne into the private grounds of the hall, where the south facing drive and courtyard enjoy magnificent views over the Tyne Valley and Newcastle in the distance.

The hall has been occupied by three generations of the current family.

The principal house had additional wings added in the 1800s. During the mid 20th century one of these wings was demolished, yet it still retains its external ground floor walls.

The gardens and grounds are stunning, with tall mature trees, magnificent redwoods and evergreens, which give great screening and privacy. The shrub borders are delightful and the rose garden is highly impressive. The driveway branches off to a rear and front drive; the rear servicing the adjacent cottages and outbuildings and the front drive connecting to the principal southern elevation of the hall, with its fine stonework, pediments and parapet surround to the roof. The tall sash windows are an interesting feature of the house and the high ceilings are undoubtedly very grand.

The principal entrance hall leads to a drawing room with a south and western elevation and a family room with principal south elevation. Both have impressive fireplaces. The rear of the hall connects to the main stairwell, which would have branched off to the north west wing before it was demolished. The rear hall leads to the kitchen/breakfast room, as well as the formal dining room which has double doors onto the east gardens. The rear hall leads to a utility room and connects to the caretaker’s flat, which has a double bedroom, a living/dining room, a kitchen/breakfast room and a bathroom.

From the principal staircase access is gained to the west first floor landing, which links to three double bedrooms and branches off to the east elevation of the house. The master bedroom suite includes a large double bedroom with two south facing sash windows, an en-suite dressing room and a store room which could be an en-suite bathroom. There are also two family bathrooms leading from this wing.

To the north wing there is a fifth double bedroom with en-suite dressing room which lies adjacent to the third bathroom and two further double bedrooms, giving a total of seven bedrooms to the house.

The detached stone stables are in a derelict condition and without a roof. They do however show obvious potential to create a luxury home. The detached stone laundry room, which has three store rooms to the side, has further potential as a detached house and the bothy which lies adjacent to the rose garden shows potential for a one bedroom cottage. All of these buildings are very well situated within the grounds.

The existing residential use includes two stone built, semi detached cottages which have two bedrooms. The cottages have lovely gardens and parking facilities. To the rear of this there is a detached 1960s built cottage with two bedrooms, known as the ‘new cottage’.

The formal gardens include fabulous mature woodland, the rose garden and the raised up lawned garden which was a former tennis court, as well as beautiful lawned gardens to the east and western elevations of the house.

There is a fence enclosed paddock to the northern elevation and to the south there are a number of paddocks lying beneath the raised up elevation of the hall. These grazing paddocks are fence enclosed and are surrounded by tall woodland. Most of the paddocks are currently managed and leased to a nearby farmer.

The Heddon Hall Estate shows outstanding potential, both as a single luxury dwelling, or to be sub divided into a number of other dwellings, subject to suitable planning and building consent.

We understand in the 1950s the property benefited from a detached lodge located near the top of the entrance drive. Old photographic images identify the existence of a lodge and planning may be possible for a new development.

The main hall itself does require modernising and updating works and the western elevation, with its impressive double storey tower, shows great potential to be linked to the former wing, which was demolished in the mid 20th century.

The Heddon Hall Estate is located to the south and east of Heddon-On-The-Wall village, with its lovely country pubs, petrol filling station and easy access into Tyneside.

To the west of the estate is the Close House mansion, with its two 18 hole golf courses, providing one of the most luxurious country house hotels within the north east of England. The golf course has Lee Westood as its international patron.

The Heddon Hall Estate lies within close proximity of Tyneside and just to the west of Newcastle upon Tyne, with easy access to stunning leisure facilities within the Tyne Valley. The International Airport is 6 miles away, whilst the Metro Centre and the Team Valley Industrial Estate are 10 miles away. The highly sought after villages of Corbridge and Hexham are 16 miles away and within easy access via the A69.

Heddon Hall is a fabulous property in a great location, with tremendous possibilities for future development.

Historic collection of material relating to Heddon Colliery. The Journal (2012).
A TIME capsule record of a year in the life of a Northumberland colliery has emerged from the impending sale of an 18th-Century hall.

Heddon Hall, on the market at around £1.5m, is currently under offer. The listed mansion is near Heddon-on-the-Wall in Northumberland.

During the Second World War, the buildings of the by then redundant Heddon Colliery were used as a printing base for The Journal. The paper moved to the old colliery because of the vulnerability of its central Newcastle offices and plant to air raids.

A sale catalogue of 1895 for the hall shows it was owned by Cadwallader Bates, antiquarian, village historian and restorer of Langley Castle in Northumberland, who died in 1902.

The catalogue is part of a series collected by the Rothbury Land Agents, R.G. Bolam and Son, and deposited with the Northumberland Archive Service.

As a result of the current sale, a historic collection of material relating to Heddon Colliery during 1902-1903 was put up for auction. It includes the colliery manager’s diary, records of output, sales and consumption, wages, details of the lease and sale of the colliery, maps and plans, manuscript letters relating to the colliery business, receipts and plans.

Yesterday it fetched £480 at the Newcastle salerooms of Anderson & Garland.

The estate was purchased by the current owners in 1932 and has been occupied by three generations of the current family. The latest sale includes the hall, the caretakers flat, three cottages and outbuildings, 41 acres of grounds and a “majestic” tree-lined avenue.

There has been coal mining around Heddon for at least 400 years.

In 1784 Heddon Colliery was the first in the coal trade to start using mechanical means of screening the coal to separate the large from small pieces. The last deep mine to be worked in Heddon was the Margaret Pit, originally owned by Cadwallader Bates.

In 1902, the pit was sold to the Throckley Coal company.

The company continued to work Heddon Colliery until the early 1930s, when it was closed, and the remaining coal reserves were accessed from the Throckley Isabella pit.