Heddon village property
based on articles by George Clark

A fair amount of new building appears to have taken place in Heddon village about the years 1829-32.

At the junction of Heddon Banks with Towne Gate, once fenced by a gate and wicket called the Green Gate, stands 'The Cottage', built in 1829. It was somewhat modernised in the 1930s, but the bedroom still retains its old east window, in a Gothic decorated curvilinear design, which appears to have been brought from some other, older building.

Next door are three cottages known as Carters Cottages built in 1832, but recently altered and modernised. They had an open yard to the rear and were presumably the homes of persons whose occupation was carting, as the surname Carter was unknown in the village at that time. 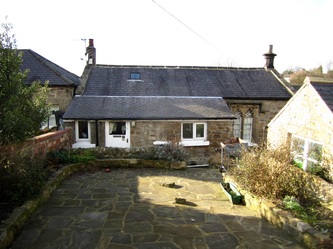 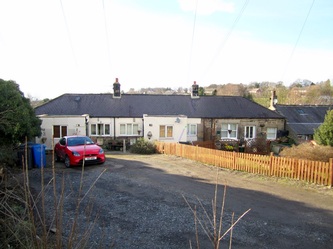 Blue Row, the terrace of houses at the head of Station Road,was built in 1832 and so named because of their Welsh slate roofs. Originally owned by the Claytons, they later became Colliery houses. Four one-roomed cottages at the north end were converted into two cottages but demolished in 1959 to make way for the new access road into the Vallum Estate.

Leading south from Blue Row is Clayton Terrace, the name providing a memory of Nathaniel and John Clayton, previous landowners in the village. Clayton's Wood, below Heddon Banks, provides another place name in the parish associated with the family. 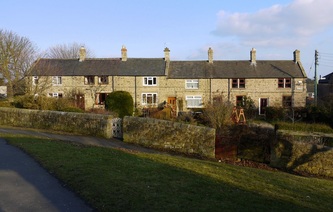 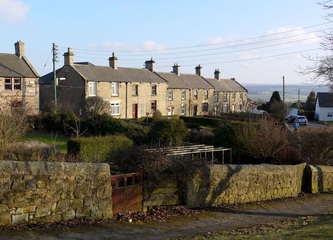 The site of the new Library was once occupied by Mushroom Row. Three cottages at Mushroom Row were built in 1832, together with five other cottages in 1854. They were demolished in 1955. 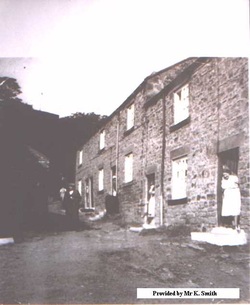 Mushroom Row. Photo provided by Mr K Smith.
I was told that the terrace of houses below Mushroom Row was called Blackberry Row. This may have been the row of 3 cottages built in 1832 south of the 5 at Mushroom Row. Below these, on Towne Gate, were Jubilee Houses. They were probably demolished at the same time.

The houses on the south side of Hexham Road, near the former Post Office, on the west side of the village were built in 1829, the date inscribed in Roman numerals above one of the doors.

The register records a tragic event: "Jane Tweddle, widow, accidentally burned to death in her own cottage late on the evening of the 12th or early on the morning of the 13th January 1812, aged 82 years."

From a description given in the Rev. Thomas Allason's terrier of July 1827, the vicarage has been in character likened to a farmyard, with its old house and cottage adjoining and various outhouses, stable, barn, byre and former stackyard. E Mackenzie in 1825 described a stone with Roman inscription found in the stone stairs at the west end of the parsonage house.

In 1840, the Rev. John Alexander Blackett obtained aid from the Queen Ann's Bounty Board to assist in rebuilding. With the consent of the bishop, the old vicarage house and adjoining cottage were pulled down and the new house built on the same site.
Modernisation took place in 1957. The old west wing was sealed off and disposed by sale. The vicarage was ready for occupation by the new vicar in 1958. The isolated west wing was sold to Mr H Swan of Houghton, who added a new wing to be a workshop for his wood carving business.

A new Vicarage was finally built in the 1980s on Towne Gate, opposite the Knott Hall. Part of this building can be seen to the right in the photo above.

The Tithe Map of 1844 shows property in the village at that time. Blue Row and Clayton Terrace were in existence then. The eastern property of Jubilee Houses was for a time the village post office and had an outside mounting block. Jubilee Houses were demolished in 1955.

Still remaining to this day is the Jubilee Tree (a Golden Maple), planted for Queen Victoria's Diamond Jubilee in 1897. In old photos, the newly planted tree can be seen encased by metal railings set into a curving stone base. Part of the stone base is still visible below the tree, on the grass below the new Library, the railings probably removed during the Second World War. The tree appears to have been moved at some stage as it seems nearer to the Methodist Church in the old photo but now stands near the boundary wall beside the old Hearse House. 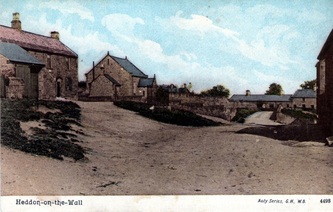 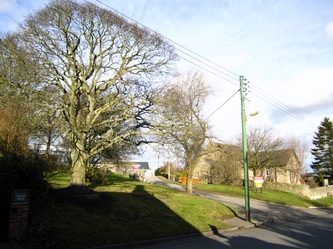 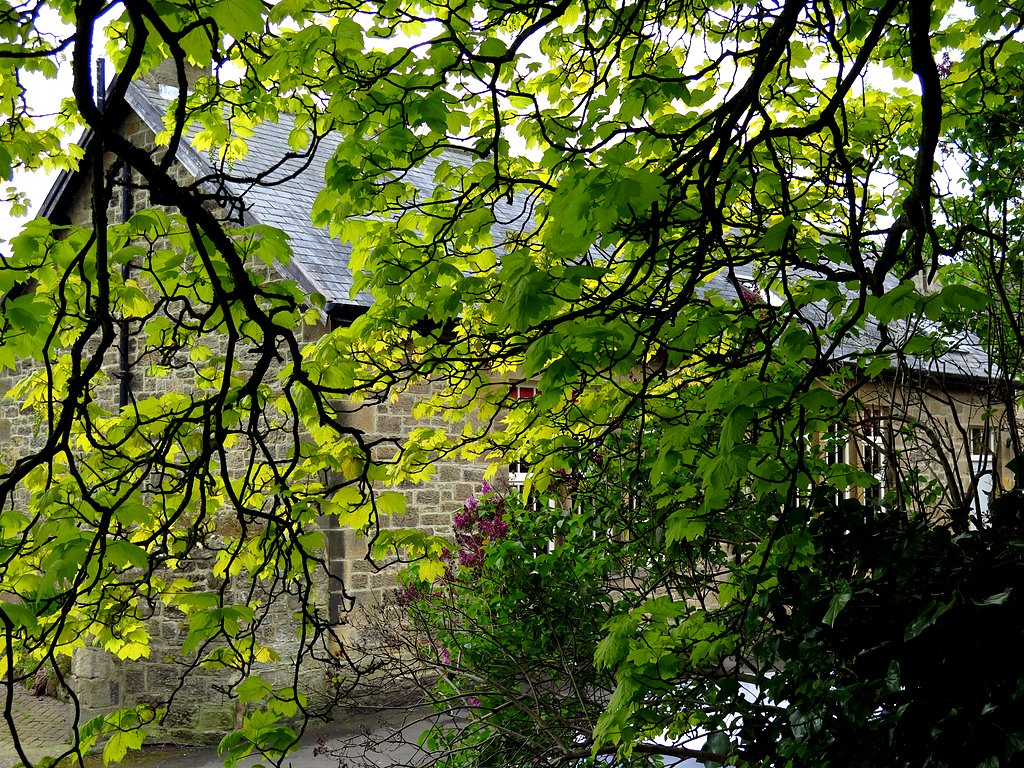 Under the Jubilee Tree in spring. Probably Acer pseudoplatanus 'Worleei' or 'Worley', the Golden-Leaved Sycamore. Photo A Curtis (2017).
The old Town Farm farmyard buildings still remain on the east of the village, now called Kennel Yard, a relic of the 'long house' where the farmer and his stock were all housed in one long building. It is now part of Tulip's haulage business. The house situated to the north of the old road was probably a later farmhouse. For a time it was called 'Four Winds' and now 'Glanville House'.

Cottages and a garth (enclosed yard) stood on the bank side where the Old School now stands and there were formerly cottages on the site now occupied by the former Men's Institute, called Square Yard, with further cottages behind, of which two still remain. Houses stood where the present East Towne House now stands and also on the adjoining site now occupied by four aged persons bungalows.

In earlier days of the rural village, its main street or thoroughfare was generally known as 'The Towne Gate'. Heddon's Towne Gate was that part of the village from the vicarage corner to Towne Farm, the usual road through Heddon before the construction of General Wade's highway in 1752, which was constructed to the north avoiding the steep hill on which stood the 12th Roman Wall milecastle. In the compulsory naming and numbering of all roads and streets in Heddon in 1958, this old thoroughfare was left unnamed. In 1960, at the instigation of Mr George Clark and the concurrence of Castle Ward RDC and the Parish Council, the ancient name of the Towne Gate was reinstated.
The plans dated 1907 show a much smaller cottage, similar to Ivy Cottage next door, but with future extension allowed for on the south side (facing), and subsequently built. The plans for a cottage and rear stable block were drawn up for a Mr Johnson Turner, local undertaker. 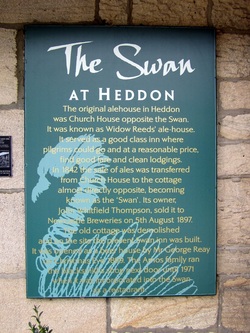 The Swan, heddon on the Wall (2010). Photo A. Curtis.
Church House, situated at the main entrance to he churchyard is one of the oldest houses in the parish. According to the west gable, it had originally been a low cottage, and at a later date an upper storey has been raised, the stonework of the lower part is of a very ancient character; it was somewhat modernised and larger new windows inserted in recent years.

The name of Church House conjures up a vision of a village institution from the Middle Ages. The Church House and Church were never far apart and it invariably adjoined the churchyard. The building would be used as a malt or brew house which sold 'church-ales' providing funds for the church. Other goods were also often stored in the Church House as a forerunner for the Church Fete and Christmas Fayre. Church House also served as a good class Inn where pilgrims could find good food and lodging at a reasonable price. Some of these Inns survive today in different parts of the country, often displaying outside hooks and chains for the tethering of horses and also mounting steps or blocks.


In the 12th century, after the death of Hugh de Bolbec, the brew-house in Heddon was valued at 4s 0d yearly. In 1628, the Heddon Vicar, Rev. William Wilson, was admonished for his intemperate habits of imbibing too much home-brewed ale at Widow Reed's ale house. The present Church House might well have been the same establishment. It was certainly an ale house, known as 'The Lamb' in 1828 and 1834, owned by Robert Harrison, local butcher and shopkeeper. 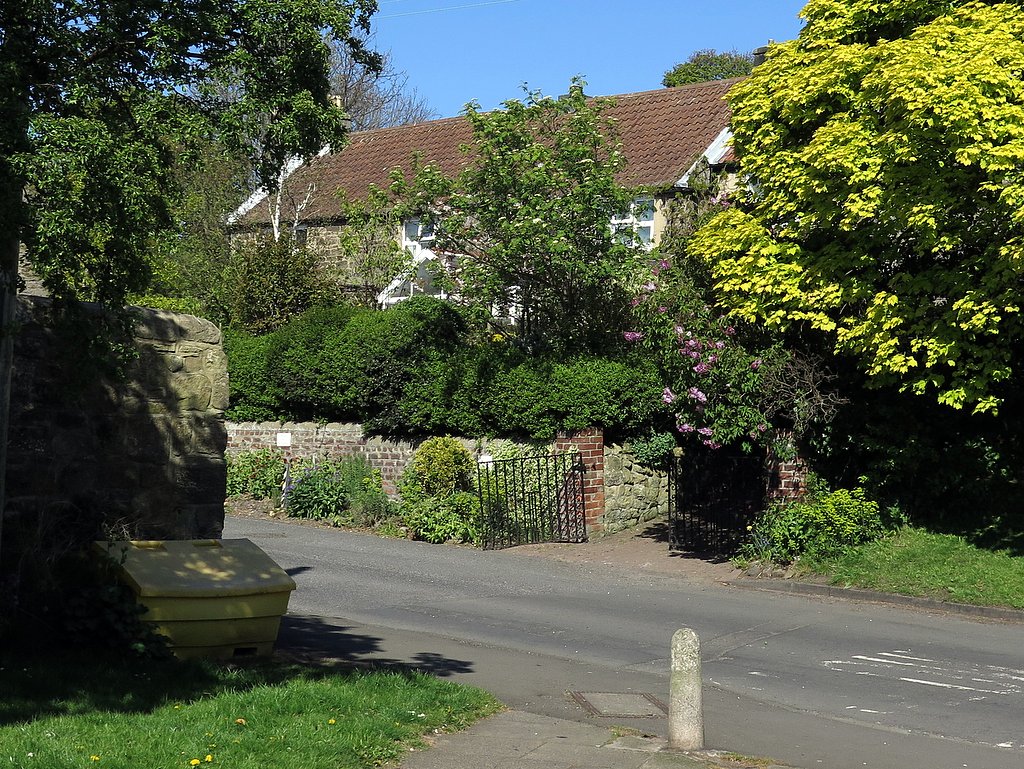 Church House, Towne Gate. Photo A Curtis (2017)
The sale of ales was eventually transferred from Church House to a cottage almost directly opposite, becoming known as 'The Swan'. Its owner in 1842 was John Whitfield of Newham. Robert Thompson, farm bailiff, was landlord in 1886, and John Whitfield Thompson sold it to Newcastle Breweries on 5th August 1897.

The old cottage was demolished and on its site the present Swan Inn was built, opened by Mr George Reay on Christmas Eve 1899.

The single-storey smithy next door to the Inn was used as a forge by the Amos family until they moved to new premises north-east of the Library in 1971. Originally the floor of the forge was the sandstone rock which here outcrops at the surface and is visible in front of the building. Outside, set in the ground, is a large circular metal plate used by the blacksmiths to fit the metal outer hoops to the wheels of horse-drawn coaches and carts. The forge became incorporated into the restaurant of the Swan, with period features including farm implements and a large log-burning fireplace. See the article here. 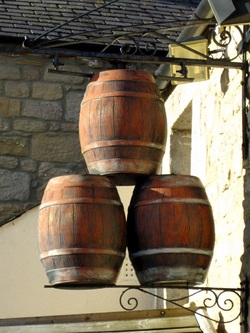 Three Tuns, Heddon on the Wall (2011). Photo A. Curtis.
Little appears to be known of the former history of the Three Tuns although it may date from 1825. The building has the appearance of an old manor house. It was once adjoined to three cottages with a communal yard to the west on the Military Road. The cottages and yard were known as 'Haddock's Hole' and were demolished in 1960.

Adjoining the Inn  at one time were a stable and blacksmith's shop, The stable is now a private garage for the innkeeper's use, and the blacksmiths shop was bought by Throckley District Co-op, converted and opened as a branch store on 5th October 1934.

It is believed that the name 'Haddock's Hole' was a corruption of Haddrick's or Haddock's Hall, the original name of the property.

The inn is now owned by the Newcastle Breweries, which they acquired on the 25th November 1926.
photos © Copyright Andrew Curtis and licensed for reuse under this Creative Commons Licence