Frenchman's Row
from articles by Pat Farnaby and George Clark


In 1796, the lessees of Heddon Colliery (Bell and Brown) built a row of flats for their workmen at the extreme eastern boundary of the parish, on Hexham Road, near the boundary with Throckley (now part of City of Newcastle upon Tyne). They were built of stone and had an outer flight of steps, leading to a wooden gallery. There is a contemporary sketch of the terrace below.

These cottages were not occupied by the miners that they had been built for. They were originally known as 'Heddon Square', but later, due to the facts relayed here, they became known as 'Frenchman's Row', or more accurately, on early maps, as 'Frenchmen's Row'.

As the cottages were being completed, three transport ships arrived in the Tyne carrying French Loyalist clergy refugees, fleeing from the Revolution. The cottages were used to house 38 of these refugees. The French clergy kept the gardens in good order and also cultivated other land in Throckley. It is also likely that, as was the custom of the day, they brewed beer, possibly for sale to miners and passing travelers. The clergy also received an allowance of one shilling per day from the British Government, quite a handsome allowance in those days. 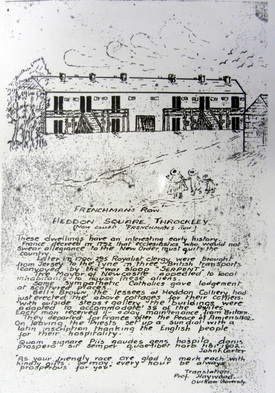 The clergy were able to return to France in 1802, after the Treaty of Amiens, and as a sign of their gratitude they erected a sundial on the front of the row of cottages. A letter of thanks from the French Clergy was published in the Newcastle Chronicle in 1802.

The cottages  were used for a time as a Poor-House. They were renovated in 1883 and became known as "Frenchman's Row". The cottage at the eastern end was later converted into a beer-house. 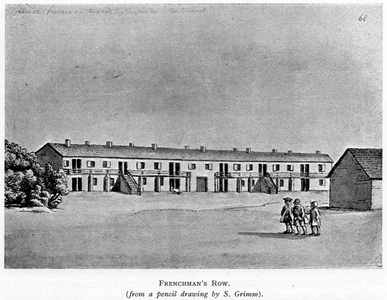 This translates as:
"As your friendly race are glad to mark each hour with kindly gifts, so may every hour be prosperous for you."

The cottages were turned into a Poor-House for the Castle Ward Union until the inhabitants were moved to Ponteland in 1849 and cottages became tenements and took on the name 'Frenchman's Row'. The original Royal French Arms was the eastern end cottage, before the current building was erected in 1897, partly on the site of the old beer house.

The sundial was restored in 1907.
An outbuilding of the pub is to the rear of the main apartment block, now known as Stables Cottage. There is a photo from 1983 of this building, described as a possible brewery building and former stable, on the SINE web site.

The boundary between Heddon on the Wall parish (Northumberland) and Throckley (City of Newcastle upon Tyne) is just to the right of the building.
Photos © Copyright Andrew Curtis and licensed for reuse under this Creative Commons Licence
Chronology from Structural Images of the North-East

There is another Charlton in Heddon (at folio 40) but not on Frenchman's Row - Widowed Ann age 57 and children Thomas, George, Lydia and Richard

Data taken from ancestory.com (17 June 2012)
Samuel Hieronymus Grimm's pen & ink sketch of Frenchman's Row (shown above), entitled 'A view in ink of colliers' houses on the road to Newcastle upon Tyne in Northumberland' as part of his Northumberland Sketchbooks can be viewed in an online gallery created by The British Library (Shelfmark: Additional MS 15543).

A note added by Roger Hawkin in 2014 states:
Roger Hawkins
27 July 2014
This picture is described in Vol. XIII of the Northumberland County History as Frenchman's Row near Heddon-on-the Wall. The editor, Madeleine Hope Dodds, states that it was built in 1796. Grimm calls it only ‘Colliers houses on the Road to Newcastle Northumbd.' And since he died in 1794, either this is not Frenchman's Row, or Frenchman's Row was built some time before 1796. Dodds also says that the French emigres after whom the row is named were the first occupiers, but Eneas Mackenzie, writing in 1825 or earlier, says that it had previously been 'inhabited' by colliers. It would help to resolve this, first if we had a date for Grimm's visit to Northumberland, and second to know what the several sketches immediately before and after No. 68 were of, as this might confirm which road to Newcastle he was on. If, for instance, we knew that he had been to Hexham or Corbridge just before, or Throckley or Newburn just after, it would leave hardly any room for doubt.