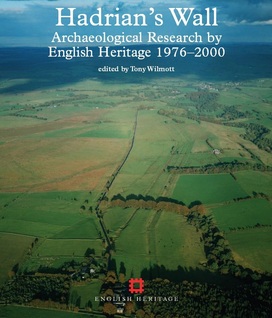 This publication from English Heritage has several articles of local interest and is available in a selection of free downloads.
The recording of the historic fabric of the Wall led to an appreciation of the work of Charles Anderson, who worked on exposing, consolidating and recording the wall from 1936 to 1974.  His long career and contribution to the Wall as we see it today are described in Chapter 3.

“No more suitable person than Charlie Anderson could be called upon to perform this ceremony. Every section of Hadrian’s Wall now to be seen owes much to his labours and supervision, and he has just retired after a lifetime of service with the DOE’s department in charge of Wall conservation. Hadrian may have ordered the construction of the Wall,but it is thanks to Charlie that we are able to enjoy so much of it today"

Robin Birley at Vindolanda (1974)
Charles Anderson's involvement with the section of Hadrian's Wall in Heddon-on-the-Wall is below:

Anderson, by now a foreman, together with two labourers began exposing and consolidating the 300m length of Wall at Heddon-on-the-Wall in 1938 completing the work in May of that year. At this time a line of trees was growing along the line of the Wall and a fence ran along the top as a boundary between two fields. At the west end of the Wall there was a medieval kiln, which had been exposed by 1879 (or possibly earlier). A drawing done in the same year shows the kiln (Fig 20) and some of the exposed facing stones on the south face of the Wall. Anderson said the tools used to carry out the work consisted of picks, shovels and wheelbarrows. The cement and lime mortar was mixed by hand shovels in the farmyard west of the site and delivered to the site in wheelbarrows. Water for the work was delivered in the same manner. Anderson notes that the east end of the site was flooded by water coming from the Vallum down the steep hill. The site was visited by Professor Sir Ian Richmond, who thought there was some evidence of puddled clay in the core of the Wall. Evidence is cited for a clay-bonded core at or near Heddon by Daniels (1978, 75) and also at Denton (Bidwell 1996, 32). Anderson says he found a short section of clay bonding of the core during the consolidation but that this was the only place that he saw it while rebuilding the Wall. This was probably because many of the sections of the Wall that he uncovered did not require dismantling to below the offset level.

The recording project also led to the discovery of the James Irwin Coates archive of drawings of Hadrian's Wall made during the years 1877-96.  This important collection gives a snapshot of the Wall in the late 19th century, and is published in Chapter 4 of this book for the first time.

Coates was a Yorkshire teacher, born in 1848, who visited the wall nine times between 1877 and 1896, each time drawing what was still visible and what was being uncovered. More than 160 drawings washed in sepia water-colour show milecastles, turrets and sections of the 73-mile long wall which have since been damaged or destroyed by farming or development.

The figures and captions below are taken from Chapter 2: A19th-century condition survey of Hadrian’s Wall: the James Irwin Coates Archive, 1877–1896 written by Alan Whitworth.
Link to download pdf.

There was a considerable amount of press interest when this collection of drawings came to notice in 1997.
The Guardian - Discovery throws new light on Roman monument.
Jarrow & Hebburn Gazette - New book draws on history of Hadrian’s Wall.