Heddon parish
based on articles by George Clark and Pat Farnaby 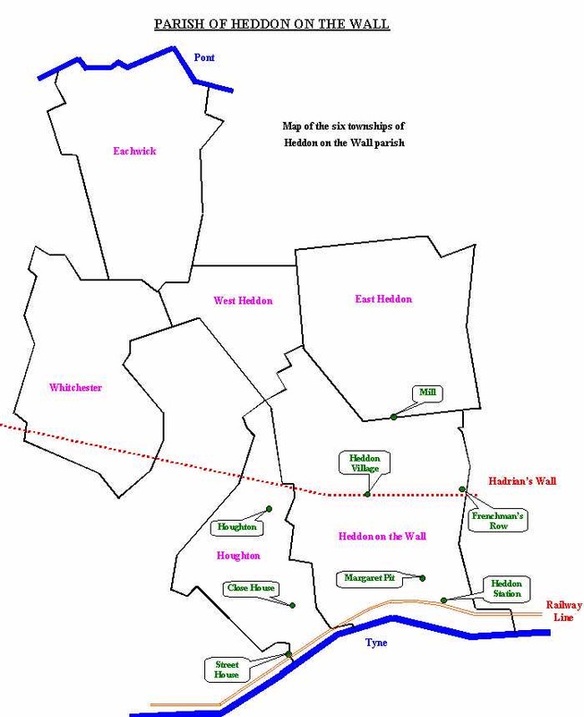 The six townships of Heddon on the Wall parish - map by Pat Farnaby based on Bates (1886)
Indications are that Heddon village grew up around the 12th Milecastle, on the southern side of Hadrian's Wall, close to the fort at Rudchester. After the departure of the Romans, Anglo-Saxon invaders from Northern Germany and Holland settled in the area and were responsible for building the original Church at Heddon. Bede refers to a place called 'Ad Murum', where baptism's were carried out in AD 653. However, the location of Bede's 'Ad Murum' is disputed and some authors favour Walbottle. The name Heddon is thought to have been derived from 'heath hill' or 'place were heather grows'. After the Norman conquests of 1066, the land was given by Henry I to the Norman Barons. The six townships of Heddon parish were made up of Heddon on the Wall, East Heddon, West Heddon, Houghton, Whitchester and Eachwick. They were bestowed upon Hugh de Bolbec, whose family came from Bolbec in Normandy, as a part of the Barony of Styford during the period 1100-1135.

Heddon on the Wall is within the Castle Morpeth District of Northumberland.