Tithe Award Maps (1848)
Based in part on Northumberland Communities

Below are copies of the Heddon-on-the-Wall Tithe Maps of 1848 by Thomas Bell & Sons of Newcastle. The large scale map of the township was drawn at a scale of 8 chains per inch with an enlargement of the village at 3 chains per inch. The maps show the main buildings, mills, railways, roads, tracks, water bodies, woods and quarries. Unlike more detailed maps in some parts of England, the Heddon maps only show the holding and ownership boundaries and not individual fields or land-use.

The original tithe map also has a list which is known as an award. Individual properties are numbered on the map and details of ownership can be found on the award. The payment of tithes started in England in the 8th century [700-799AD]. At first tithes were payable in kind - 10% of farm produce was payable to the local parish. In 1836 an Act of Parliament changed the payment to a rent-charge payable in cash. In order to set up this charge, a large-scale map and award were created for most English townships. These documents are known as the tithe award and map. Three copies were made. One copy was for the Bishop [Diocese], the second copy was kept by the local church [Parish], and the third copy was made for the Tithe Office. The Northumberland Archives Service now holds the Diocesan copy and many of the parish copies. The Tithe Office copy is held at The Public Record Office.

The rent charges paid to landowners were converted by the Tithe Commutation Act 1836 to annuities paid to the state through the Tithe Redemption Commission. The payments were transferred in 1960 to the Board of Inland Revenue, and finally terminated by the Finance Act 1977. At first, commutation reduced problems to the ultimate payers by including tithes with rents. Later the decline of large landowners led tenants to become freeholders and again have to pay directly; this also led to renewed objections of principle by non-Anglicans.

Later Tithe Acts of 1936 and 1951 established the compulsory redemption of English tithes by the state where the annual amounts payable were less than £1, so abolishing the bureaucracy and costs of collecting small sums of money. 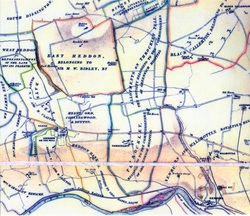 Tithe Award Map of Heddon by Thomas Bell & Sons (1848)
The maps show that Heddon on the Wall township was divided between three main landowners. Much of the village and land to the south-west, down to the river (now Heddon Banks Farm) was in the ownership of Messrs. N.J. and M. Clayton. Bay's Leap farm to the north of the Military Road was also owned by them, the two blocks separated by the Glebe Lands and Common. George Bates Esq. owned the land to the south-east, including Heddon Hall (unnamed) and the 'Fire Brick Factory'. The final block was owned by Messrs. Ord, Collingwood & Dutton, extending from the village north to 'Heddon Mill' and east to the 'Workhouse' (Frenchmen's Row) although excluding the small parcel of land immediately east of the village, south of the Roman Wall, owned by the Claytons.

To the east, nearly all the lands of Throckley were the property of the Commissioners of Greenwich Hospital.

The map on the right shows the ownership of property and land in the village of Heddon on the Wall, and provides a key to the numbered properties on the enlarged tithe award map on the left, albeit drawn eight years later. Nathaniel & John Clayton are main landowners but there are small parcels of properties with other owners including: 'Representatives of the late Mr Watson Charlton' west of the vicarage, 'Mr John Whitfield's premises' (The Swan Inn), 'Heirs of the late J.M. Bates' (the areas occupied by Heddon Square east of the Swan, and Mushroom Row to the north), Mrs Margaret Bewicke just east of the churchyard, and 'Messrs Orde, Collingwood and Dutton' to the north and east, including Town Farm. The roads of Heddon Banks and Station Road are both annotated  'Private carriage road'.