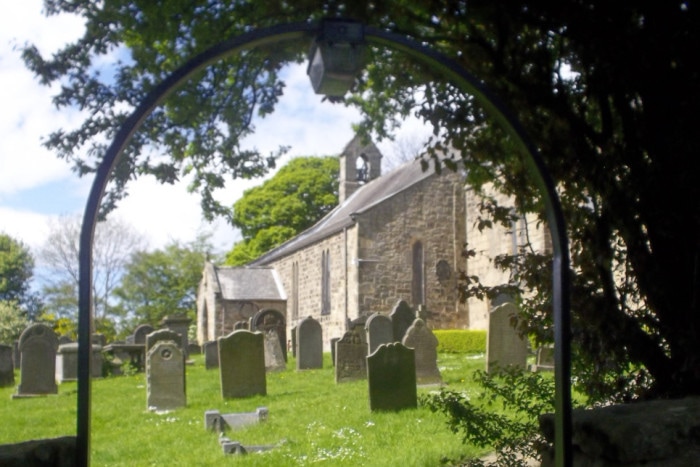 Is St Andrew's Church, Heddon On The Wall, where Peada and Sigbert were baptised?
Oswy was King, first of Bernicia then of all Northumbria, from 642 to 670, a long reign by Anglo-Saxon standards.

Bede describes how in 653 Oswy persuaded Peada, son of Penda of Mercia and King of the Middle Angles, and Sigbert, King of the East Saxons, to accept Christianity.

Peada’s conversion was not entirely disinterested. He wanted Oswy’s daughter, Alhflæd, but ‘could not obtain his desire unless he would receive the faith of Christ and be baptised, with the nation which he governed.’

Bede gives the story a pious gloss: ‘When he heard the preaching of the truth ...he declared that he would willingly become a Christian, even though he should not obtain the maiden; being chiefly prevailed on to receive the faith by King Oswy’s son Alchfrid, who was his brother-in-law and friend, for he had married his sister Cyneburg, the daughter of King Penda.

‘Accordingly he was baptized by Bishop Finan, with all his nobles and thegns, and their servants ... at a noted township, belonging to the king, called At the Wall.’ Sigbert of Essex was a personal friend of Oswy’s: ‘who, when

Sigbert came to the province of the Northumbrians to visit him, as he often did, used to endeavour to convince him that those could not be gods that had been made by the hands of men; that a stock or a stone could not be proper matter to form a god ... That God is rather to be understood as incomprehensible in majesty and invisible to human eyes.

‘King Oswy, having often ... said this and much more to the like effect to King Sigbert, at length ... after he had consulted with those about him, and exhorted them, when they all agreed and assented to the faith, he was baptized with them by Bishop Finan, in the King’s township above spoken of, which is called At the Wall, because it is close by the wall which the Romans formerly drew across the island of Britain, at the distance of twelve miles from the eastern sea.’

One wonders if Oswy was quite the theologian Bede makes out; but there were other considerations beside. Christianity meant civilisation: rich fabrics, rare spices, finely wrought jewellery and metalwork, writing, the use of money, and methods of government and administration hitherto unknown in Anglo-Saxon society.

The two conversions were a triumph for Oswy. Missionaries from Northumbria went to Middle Anglia (Leicestershire), and one of them, St Cedd, went on to Essex, thus spreading Oswy’s influence in both kingdoms. Unfortunately, his success was short-lived. Sigbert and Peada were murdered, and Oswy’s son, Alchfrith, came to an unknown, but probably violent end.

Peada’s father, Penda, was an inveterate enemy of Northumbria. Despite the dynastic marriages between his and Oswy’s sons and daughters, he invaded Northumbria in 655, forced Oswy back to Stirling, and came away with a huge ransom. Then, though heavily outnumbered, Oswy defeated and killed Penda at Winwaed near Leeds.

Despite this, Oswy confirmed his son-in-law Peada as sub-king and introduced Christianity throughout Mercia. But then Peada was murdered, with the connivance of Alhflæd, the wife he had been at such trouble to marry.

Sigbert was murdered in 660-61, and although Cedd remained Bishop of the East Saxons until his death in 664, Oswy’s influence there was at an end.

Alchfrith’s fate is a mystery. He fought alongside his father at Winwaed, and Oswy made him sub-king of Deira. Soon after, he gave a site at Ripon to a group of Celtic monks, including the young St Cuthbert, but came under St Wilfrid’s influence, who encouraged him to eject the Celtic monks and replace them with others belonging to the Roman church.

This was a dangerous move. The Deirans, who had been converted by St Paulinus of Canterbury, inclined towards the Roman usage, whereas the Bernicians, including Oswy himself, were Celtic Christians. Oswy had only with difficulty established his authority over Deira, so Alchfrith’s action was not merely irritating, but threatened a revival of Deiran separatism.

We don’t know what happened to him. He attended the Synod of Whitby in 664, then disappears. His wife Cyneburh, however, became a nun and founded a priory at Castor near Peterborough.

The cross at Bewcastle is in part a memorial to both of them. Many places that Bede mentions, including At-the-Wall, or Ad Murum, cannot now be identified. Except for Roman stations, or iconic sites like Bamburgh, Anglo-Saxon place names often prove difficult to locate. One reason for this is that some at least were what John Blair, in The Church in Anglo-Saxon Society, calls ‘open-ground royal vills’.

Such places had a hall and other buildings, but they would be of timber and comparatively short-lived. The King, with his household and bodyguard, normally visited twice a year to receive the food renders from the surrounding hamlets, hunt, feast, dispense justice, and then on to the next place.

The reeve, who lived in the hall and managed the estate, moved out for the King, but most of the court lived in temporary shelters. In short, these places were not permanent and haven’t left much mark on the landscape.

Bede says that Ad Murum was near the Wall and 12 miles from the sea. This seems clear enough, but how long were his miles, and where was he starting from? Places from Wallsend to Heddon have been suggested for it, and Hunter Blair, in Northumbria in the Days of Bede, identifies it with Newcastle: ‘Anyone who walks inland along the twisting course of the Tyne for 12 miles from its mouth, and it is difficult to believe that Bede had never done so himself, will arrive at Newcastle, ...’

But what if, equally likely, Bede crossed over from Jarrow to Howden and followed the Roman Wall for 12 miles?

Madeleine Hope Dodds, in Vol. 13 of the County History, 1930, recognises only two serious contenders, Heddon and Walbottle, but ‘at present Walbottle is more generally accepted as Bede’s Ad Murum.’

She refers to an article in History for 1928, by Allen Mawer, who is best known for his place name studies. ‘Ad Murum,’ he says, ‘must be Walbottle in Newburn. It fits the position exactly and the name itself probably records the fact that it was a vicus regis ad murum.’

That two such equally reputable scholars as Hunter Blair and Mawer should differ so widely shows how uncertain any identification must be.

Bishop Finan’s involvement suggests the existence of a minster. If so, Ad Murum could be marked today by an Anglo-Saxon church. Walbottle has no such church, but is close to Newburn, which does. Its name is its strongest card. ‘Botl’ means a dwelling, and by implication an important one.

Heddon’s claim, however, is equally good. St Andrew’s church has Anglo-Saxon ‘long and short’ quoins at the southeast corner of the nave. And Milecastle 12 lies directly under Town Farm.

Was Heddon, then, the baptismal place of kings?

Note: The passages from Bede’s Ecclesiastical History are from A.M. Sellar’s translation.