Mr. Bates gave an interesting account of the section made by him across the works of the vallum on the height to the east of Heddon, and exhibited two objects found there: a bronze socketed and looped celt and a thumb flint.

He said on the 20th inst. Dr. Hodgkin asked him to assist in making a section of the vallum at the Great Hill about a quarter of a mile east of the village of Heddon-on-the-Wall. It was upon the western declivity of the hill that the cutting was made which he would describe.

The earthworks, or vallum, were generally described as a ditch and three mounds; one mound to the north, then a ditch, then a mound on the south side of the ditch, and then a mound further south again. It was only a year or two ago that Mr. Neilson of Glasgow pointed out that the marginal mound on the south side of the vallum was not continuous throughout.

They began excavating the ditch to see what the form of it was, and fortunately they hit upon a seam of fire-clay, by which means they got the exact form of the old ditch. It had been supposed that the ditch was V-shaped, but now anyone could see it was a flat- bottomed ditch. They found that the fire-clay had been removed on to the north mound and on to the south mound, thus proving that the two mounds were constructed at the same time, and were contemporaneous with the cutting of the ditch. This excavation showed, in fact, the whole of the works at that point were executed at one time, and that any theory, however ably argued, based on the argument that these works were not executed at one and the same time must be abandoned.

As the result of this examination, it would be impossible for anyone henceforth to say these earthworks were built of turf. These works must be considered from the point of view of the ditch as the centre, and they need not argue so much about the mounds. He believed Mr. Gibson was the first person to notice there was a marginal mound on the north side. As showing that the marginal mound was really upcast stuff, they found a flint scraper. More remarkable still, in the same north mound, about 8 inches above the original line of the soil, and about 6 feet from the line of the clay, they found a bronze axe-head.

Mr. Fenwick Charlton deserved thanks for giving his engineering experience in superintending the excavations. Canon Greenwell said the first cutting of the vallum had turned out to be of a most valuable character. It had proved conclusively that the mounds and the ditch were all done at the same time. If the mounds were thrown up by the Romans, of which he had no doubt, the bronze axe-head had nothing to do with the people who threw up the works, because bronze had been in disuse for centuries before the Romans set foot on British ground. The axe-head was a characteristic specimen of the Bronze period. He suggested it had found its way into the vallum by being taken up with the surface soil of the adjoining country. The flint scraper had probably got into the mound in the same way. 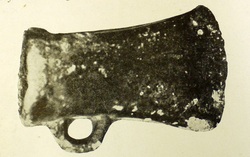