Where is 'Ad Murum'?
an article by Rev. J.P. Senior published in Vision, August 1984

When I take people round our church and tell them that it was founded in about 680 AD, I have to admit that the date cannot be found in any ancient document but is based upon only circumstantial evidence. It is, for example, deduced from the architectural style (for instance, H.M. & J. Taylor in their monumental work 'Anglo-Saxon Architecture' put it in the period 600-800 AD), or from its dedication to St Andrew (which suggests that it is contemporary with Hexham Abbey (674), or Corbridge (676), or Bywell St Andrew, or Newcastle St Andrew, of similar date).

But there is no documentary evidence ...... or is there?

Bede, the Father of English History, no less, has a couple of intriguing references in his 'History of the English Church and People', completed in 731. In Bk.III, chapter 21, he records the baptism of one King Peada "by Bishop Finan .... at a well-known village belonging to the king (i.e. Oswy, king of Northumbria) known as "Ad-murum", and, a little later King Sigbert was baptised "by Bishop Finan in the king's village of Ad-murum, so named because it stands close to the wall which the Roman's built to protect Britain, about twelve miles from the eastern coast". These incidents are both dated by scholars 653 AD.

There can be little doubt that "the wall which the Roman's built ..." is Hadrian's Wall built about 122 AD beside which Heddon village stands. Bede does not mention the name Heddon, but Ekwall does not record any mention of this name earlier than Hedun in 1175. 'Ad-murum' is translated 'At-Wall' in the Penguin Classics edition of Bede, not so different from 'On the Wall' (though in Latin our name is usually 'Hedon super murum'). On high ground, a splendid defensive position, Heddon as we know it would be an excellent site for 'the king's village'.

But all is not lost. Along Hadrian's Wall, at intervals of precisely one Roman mile, there are fortifications known nowadays as 'milecastles'. The sites of almost all these milecastles have been established by excavation, and they have been given reference numbers beginning in the east and counting westwards. And right by Heddon village is milecastle 12, exactly 12 Roman miles from the eastern limit of the Wall at Wallsend. Could it be that Bede thought that Hadrian's Wall began right on the coast (he twice tells of it running from sea to sea), and therefore assumed that the twelfth milecastle was twelve miles from the coast?

We cannot prove it, and the site of Ad-murum has been put at various points from Newcastle (Pandon) in the east, to Heddon in the west.. But the actual site of the King's village has never been found. The local historian, Cadwallader J. Bates, writing in 1885, argued strongly that Ad-murum with its royal villa was at Heddon.

If this is true, Heddon existed (probably under another name) in 653, and there the second Bishop of Lindisfarne, Finan, baptised the future kings of the Middle Angles and the East Saxons. Interestingly enough we still have a well, known as Finer's Well, in the parish. It is two miles from the village, off the Stamfordham Road, and so even further from the coast, but it may have been usedby Finan for baptism and therefore named after him.

We usually date our church at 680, just after Hexham. If Ad-murum were identified with Heddon (and there is no evidence of it elsewhere) then almost certainly we could claim that we had a church here before 653. Can ayone shed any further light upon it?
Eneas Mackenzie (1827) 'A descriptive and historical account of the town and county of Newcastle upon Tyne'

This earlier author equates the location of Ad Murum, the king's village, and place of the baptism events, as being Newcastle. On page 5, he states:

Camden places Ad Murum at Welton, a village 3 miles north by west from Ovingham; and Dr. Smith fixes it at Walbottle. Brand says, " A similarity of sound in the name has, it seems, occasioned both these errors, for such have our later discoveries clearly enabled us to call them ; Ad Murum being unquestionably the present Newcastle upon Tyne, where there are still traditionary and printed accounts that" the Saxon kings of Northumberland had their palace." Bede tells us that the royal town Ad Murum was distant 12 miles from the eastern sea. Now, as the Roman measures would probably be retained in Bede's time, if we believe Dr. Gale, who makes 15 English miles answer to 20 Roman, his account of the distance of Newcastle from the sea will be strictly correct.
Northumberland National Park - Historical Village Atlas - Harbottle

In a section on place name evidence discussing the origin of the -botl names:

Harbottle is one of a number place names in northern England and southern Scotland which incorporate the Old English suffix botl, generally translated as 'lord's hall'. It is perhaps the equivalent of the Latin term villa, which is used frequently in the works of Bede and his contemporaries to denote royal and ecclesiastical estates (cf. Higham 1986, 293). This class of placename has been considered to represent an early element in Anglian place name formation, i.e. belonging to the fifth-sixth centuries, but it has recently been the subject reconsideration by Barrow (1998, 67-9), who points out that its distribution across southern Scotland suggests some of these names could have originated later on, in the 7th - 8th centuries.

Other examples of this toponym in Northumberland include Shilbottle and Walbottle. The latter is particularly interesting in this context as it has been identified with the 7th Century Northumbrian royal estate centre located close to Hadrian's Wall mentioned by Bede (Hist. Eccles.), the villa regia ad murum. Antiquaries from Camden onwards have more often proposed locating this centre at Heddon on the Wall (cf. Camden 1607, 218), but Walbottle would appear to represent a more convincing translation of Bede's Latin and would accord better with his indication that it lay 12 miles from the sea.

However decisive archaeological confirmation is lacking. Nor was any evidence of early medieval occupation found during the recent extensive excavations in advance of development at another site which has been included in this 'bottle' category, namely Bottle Bank on Gateshead bank of the Tyne above the historic bridgehead. 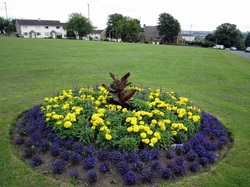 Village Green, Walbottle. Photo by A. Curtis (2010).
All these mean the jury is still out. Is it unpatriotic to suggest that Walbottle's claims seem quite strong? Perhaps one day we'll find some good archaeological evidence if it hasn't been completely destroyed. Whatever the outcome, Heddon on the Wall will always have its notable choir, the 'Ad Murum Singers'.