The following memorials are in the new extension to the churchyard:

315) Treasured memories of a loving husband son brother and friend Norman Tricoglus died 3rd September 1977 aged 25 years. Also his dear mother Mary died 5th November 1988 aged 61 years. Every day no matter where deep in our thoughts you are always there.

330) In loving memory of Ralph son of the late Mabel and Ralph Bell died 7th May 1982 aged 57 years. Always remembered.

The following memorials are inside the church:

351) In affectionate remembrance of Annie Sybella the beloved wife of Matthew Charles Woods of Holeyn Hall who died April 22nd 1881. "For thou O Lord God art the thing that I long for, thou art my hope even from my youth.

353) Sacred to the memory of Captain William Akenside of the 14th Regt of Foot son of William Akenside late of Eachwick who departed this life the 22nd of Oct 1830 aged 49 years. Also died on the 26th of March 1832 Mary Akenside aged 82 years this monument is erected by Hannah Akenside as the last tribute of duty and affection both to her honoured mother and beloved brother.

354) The electric light is placed in this church in memory of Colonel Ernest Robinson CBE, TD, DL, JP by his wife and family. Died at Heddon Hall August 14th 1935 aged 58. This tablet is also in memory of Gertrude his wife died December 8th 1939 aged 56 and Capt. Kenneth Jeffrey Robinson R.A. their younger son killed in action in Normandy 10th July 1944 aged 25.

356) To the glory of God and in memory of the Reverend Charles Bowlker vicar of this parish for 22 years who died at Oswestry January 14th 1901 aged 74 years. This tablet is erected by his parishioners and friends as a loving memory of his life and labours.

357) Erected by the parishioners and others in memory of the Rev. Michael Maxwell Heron for twenty four years vicar of this parish who died April 4th 1873.

360) [Stained glass window] AD 1881. In memory of George and Edward Bates who rest near Holy Cross Church Cloeden on Elbe.

362) [Stained glass window] In loving memory of Captain Henry Basil Knott 9th Northumberland Fusiliers who fell on the Ypres Front on the 7th of September 1915. Also of Major James Leadbitter Knott D.S.O. who was killed in action while in command of the 10th West Yorkshire Regiment during the British Advance on the Somme 1st of July 1916.

363) Major James Leadbitter Knott D.S.O. who fell at the Somme on the 1st July 1916 aged 33 years. He lies at rest beside his brother in the British Cemetery at Ypres. Captain Henry Basil Knott who fell at Ypres on the 7th Sept 1915 aged 24 years. Their bodies are buried in peace but their name liveth for evermore.

Heddon on the Wall War Memorial 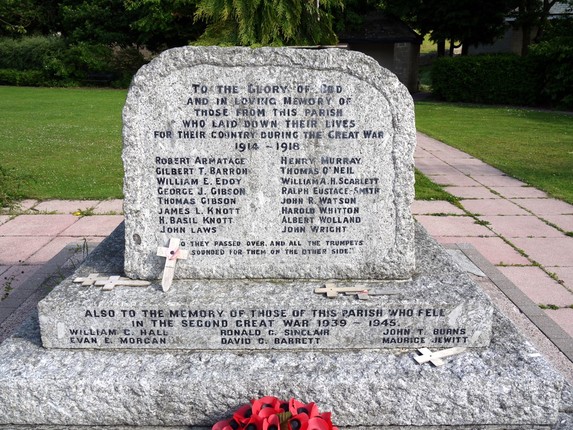