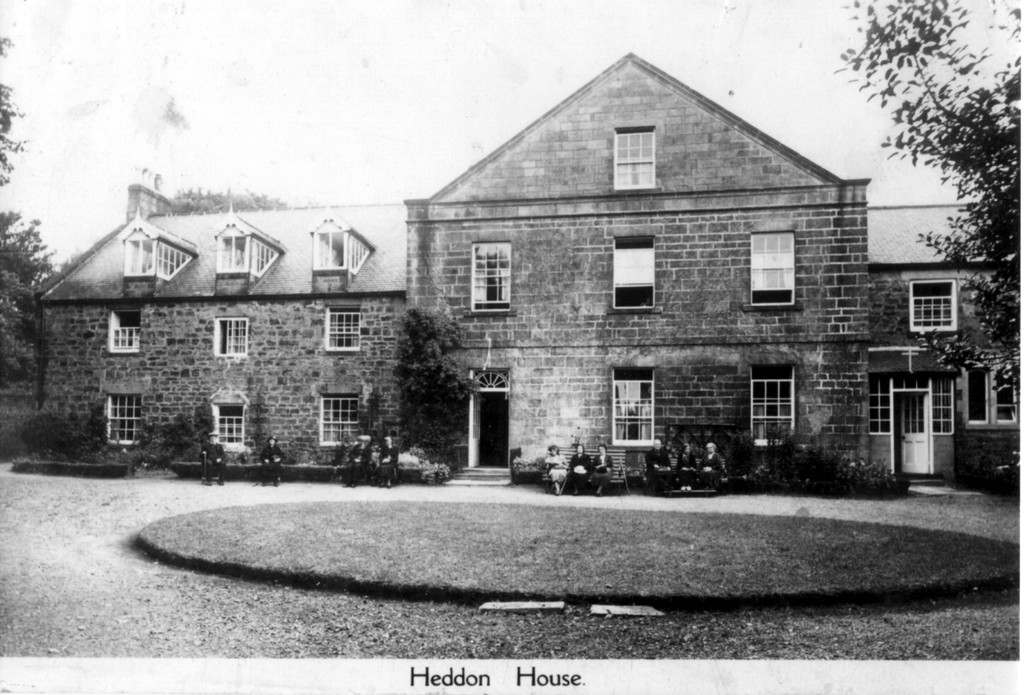 My note about Richard Burdon (see August issue “A Dorset Connection” [Vision, August 1987]) has sparked off more interest than any other article. Many people have spoken to me (or even telephoned) giving information about ’Dickie Burdon’ as he seems to have been known here. I am indebted to them for most of what follows.

Baptised in St. Andrew’s church on 25 April 1830, he was one of eleven children born to George and Elizabeth Burdon of Heddon House (now Heddon Home). George Burdon hailed from Bywell Castle where be was born in 1798, and rose to become a Justice of the Peace and Deputy Lieutenant of Northumberland. On 21 November 1820 at St. Andrew’s Church he married Elizabeth, almost certainly the only daughter of Richard Thomas and Isabella Peareth (nee Dent) of Heddon House, from whom she inherited a life interest in Heddon House.

Their fourth son, Richard Burdon chose one of the few socially acceptable professions of his day, namely the church. After taking Holy Orders and serving as an assistant curate he would need to seek a suitable living. He found one through the good offices of Algernon Percy, fourth Duke of Northumberland, in whose patronage lay the parish of St. Mary and St. James, Hazelbury Bryan, in the Diocese of Salisbury. There, he was presented, instituted and inducted Rector in 1859 at the age of 29.

Twenty-five years later, in January 1884, his mother Elizabeth died (according to an 1886 Directory - there is no record of burial at Heddon). Sadly, only three months later, his father George died, and was buried at Heddon on 7 April 1884. Upon the death of Elizabeth, her life interest in Heddon House expired, and the property reverted to her nephew, William Napier Peareth.

Richard, the Rector of Hazelbury Bryan, wasted no time and purchased the estate from William Napier Peareth. Presumably he also resigned the living of Hazelbury Bryan about this time, for his successor there was instituted in 1887. Thus Richard Burdon became the owner of the house of his childhood, and presumably of the whole West Heddon township including the farms of West Heddon and Heddon-steads. So far as is known he never held any further  church appointment, though in 1898 he officiated at the funeral of one William Josiah Allison, aged 23, of Heddon House.

When Richard took over as master of Heddon House he was 54 years of age, and it is said that he was already a widower with no children. But he brought to Heddon a number of family retainers and soon recruited many servants locally, among them Thomas Watson, farm manager for the James family at Rudchester for 16/6 (82.5p) a week who went to Richard Burdon in a similar capacity for 19/- (95p) a week and stayed with him for 26 years.

Other local people included a team of milkmaids who arrived in the fields with a cartload of pails to milk cows in the corners of the fields. Some of the milk was used for cheesemaking at Heddonsteads under the direction of a cheesemaker from the south named Watts. Another southerner was a simple countryman who liked dressing up. Here in the north be was proclaimed Mayor of Heddon - though it said that ‘Harry the Mayor’ was sometimes given too much to drink and the affair was stopped.

A Mrs. Wolland lived in a little white tollhouse just west of the Rudchester crossroads on the north side of the road, whilst at North Shoppe (then a shop selling sweets and yeast) lived Mr. Frizzle (so spelt in those days), who it is said was bent double but never complained. At North Lodge were the Scarletts, one of whom had served as a batman in the army. It seems that Dickie Burdon was a kindly man who gave employment to many and looked after them well. Perhaps some took advantage of his kindness, for Heddon House became nicknamed ‘the convalescent home’ or ‘the house of rest’. He was kind to his animals too: after his death no fewer than 27 horses were sold, many retained after their working days were over.

He was, however, not averse to progress. Just before the outbreak of war in 1914 he bought an 'Overtime' tractor from the United States - the first in the district - and put it into the charge of his horsemen. They, not unnaturally, did not know what to do when it broke down, and it was towed back by the horses and left unused. During the war, when horses were scarce due to commandeering by the army, the man who drove the thresher asked about it and was told that he was welcome to it if he could make it go. He was successful, but it too was commandeered by the military soon afterwards. 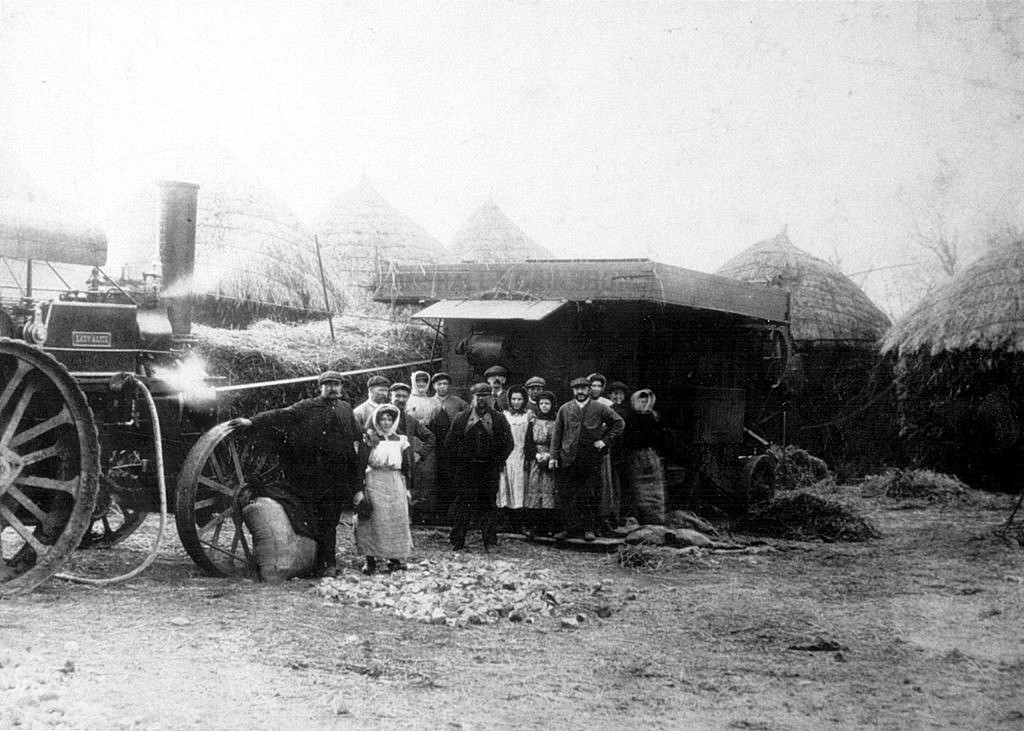 Farming group, Heddon Steads (undated).
Also during the 1914-18 war, on 13 August 1917, ‘Dickie’ aged 87, married his housekeeper, ‘big’ Emma Allison, who was 57. It is said that he scarcely knew what he was doing, but she did. In our marriage register he is described as “of full age, widower, of Heddon House, son of George Burdon, deceased, gentleman”, and she as “of full age, spinster, of Heddon House, daughter of Thomas Allison, deceased, deputy governor”. It would be interesting to know what ‘deputy governor’ implied.

Within two years of this, his second marriage, Dickie Burden was dead, being laid to rest in Heddon churchyard on 6 March 1919. There being no children, the estate went to a nephew ‘the major’ presumably Major Edward Griffiths George Burdon, late 4th battalion Royal Northumberland Fusiliers, for his will directed how it was to be disposed. The manor of Lugwardine, near Hereford, and lands at West Heddon in trust for his nephew George Boyd Burdon, for life, with the remainder to his sons or daughters in tail, all subject to certain conditions including that the persons in possession should assume the final surname Burdon, and that George Boyd Burdon should take the additional name of Griffiths before the surname Burdon.

Major Edward Burdon was presumably the son of one of Richard Burdon’s four brothers, and so would be around 65 years of age by 1920 when he, too, must have died, for George Clark says that he sold the land at West Heddon in 1920. This must be mistaken because it is hardly likely that his will including that land would be published if he had already disposed of it. Unfortunately the newspaper cutting is undated. Presumably it would be Major Edward Burdon’s nephew who broke up the estate.

However it happened, it is said that Richard Burdon left Turpins Hill to Emma his wife. The Bolams lived there and Emma Allison (that was) was somehow related. The rest went to the nephew Major Edward Burdon, and it was probably his nephew George Boyd Griffiths Burdon who sold it, all within eighteen months or so of Richard’s death if George Clark’s date is right. The sale was to Alderman John Frederick Wiedner, the shipping magnate, of Condercum House, Benwell. He gave Heddon House to the Society of St. Vincent de Paul as a rest home in memory of his son Charles William Wiedner, R.F.A., who was killed in action in 1917. The gardens attached to the house were taken over in April 1921 by W.N. Hall & Sons proprietors of “Halls of Heddon” the well-known nurserymen still there to-day. The remainder of the estate was sold to Northumberland County-Council, who still own it.

It would be interesting to fill in the details, and not too difficult as the events are recent. I should certainly be glad to receive any comments - or amendments - of the story so far. We know nothing of Richard Burdon’s first wife, presumably ‘the vicar's wife” in Hazelbury Bryan, and little of how the estate came to be broken up. Is Newcourt, Lugwardine, still in the family?

I am very grateful for all the comments received, and hope that I have recorded them correctly. Any further information will be welcome.