West Heddon formed part of the Bolbec barony and was assigned to Robert of Harle on the division of the barony in 1355. A family bearing the local name held West Heddon earlier but nothing is known of them except their names, Gospatric living in 1166, Orm and his son Robert in 1178 and 1187, another Robert in 1242 and 1262, his son Robert in 1287, and William in 1296.

The lands of Robert of West Heddon were seized by the King's escheator for his alleged treason in 1317 but appears to have recovered possession at a later date.

The Delavals were the next owners. In 1572 Sir John Delaval left his farmhand called "West Hedwyne" to his younger son Thomas for life. He also mentioned a debt of 6s. 8d. to Richard Read. The Reads of Houghton were a branch of the Reads of Close House. The will of Thomas Read of Houghton was dated 13th July, 1578, and in it, he left his wife for life all his lands in Houghton and his leases of land in West Heddon and North Dissington. John Read the son and heir of Thomas bought West Heddon from the Delevals and he was a freeholder there in 1628. John Read had been pardoned for manslaughter in self defence on 17 July 1620. His family continued to hold West Heddon for some generations.

In 1663 Mr. Richard Read was assessed at £40 on West Heddon and in 1668 Clement Read, a gentleman from Yorkshire, left £5 per annum to the poor of Heddon on the Wall. Before this date he had probably sold West Heddon to John Fenwick, who had married one of the co-heiresses of the Benet lands in Heddon.

John Fenwick made his will on 10th March, 1667 leaving his lands in West Heddon to his son John Fenwick, and died a few days later.

On 29th March 1687, Dorothy married her second husband, John Carr from Eshot. In 1689 John Fenwick now living in Binchester in Durham released his remaining rights in West Heddon to John Carr and in 1711 John Carr bought from Dorothy (daughter of Christopher) and Thomas Ward, her husband, their rights in the property of the late Christopher Hunter.

John Carr, like his predecessors, was greatly in debt and to satisfy the claims of one of his creditors, Mr. George Pickering, he gave to him the New Steads in West Heddon. These consisted of 120 acres including the Westerlaw Hill, Hog Stubble, High and Low Brooms, the Bogs and two more closes. These were bordered by Whitchester and Rudchester, Glororum loaning and Eachwick.

The New Steads remained with the Pickering family until 1786, when the last George Pickering, grandson of the first left them to his nephew Anthony Stevenson, a shipowner of Newcastle. He became bankrupt in 1799 and the bankruptcy court sold the New Steads in 1804 to the Misses Peareth, who by then were the proprietors of the rest of West Heddon.

John Carr of West Heddon was buried in the church at Heddon on the Wall in December, 1738. He left three surviving sons, Henry, Christopher and Ralph.

Heddon House was probably built around this time. It is said to have originally been an inn and there is a rumour that it was once visited by the highwayman Dick Turpin. However, a certain Richard Turpin being a member of a local family from the neighbouring township of Whitchester, almost certainly would have visited, and it is more than likely that the reference is to him.

Robert died in 1794 and is commemorated by a tablet in Heddon church. In his will he left his whole property to his wife, Jane. She sold West Heddon on 12th May, 1795, to Miss Elizabeth Peareth, daughter of Alderman William Peareth of Usworth. She died unmarried on 23rd November 1798, and was buried at St. Nicholas in Newcastle.

In 1801 West Heddon was settled in the hands of trustees to the use of her sisters, the Misses Ann, Mary and Henrietta Peareth. They named as their heiress, their niece Elizabeth, daughter of Richard Thomas Peareth.

She married George Burdon in 1821. Her heir, the Reverend Richard Burdon, lived to the age of 92 and died intestate in 1919. His heir at law was his nephew, Major Edward Griffith. George Burdon, who in 1920 sold the West Heddon estate to Alderman John Frederick Weidner of Condercum House, Benwell.

When Heddon House and lands were in the possession of the Burdens, it was run as a large dairy farm. From its produce, 14 tons of cheese were carted to Newcastle each year and, in addition, 240 pounds of butter were delivered each week; these being the products from a milking herd of 100 cows: Guernseys, Jerseys and Shorthorns. Milkmaids from Heddon village walked to and from the dairies, approximately one and a half miles each way, twice a day, to milk 10 cows each and were paid sixpence per day. As long as the weather permitted, the milking was done out in the open fields. 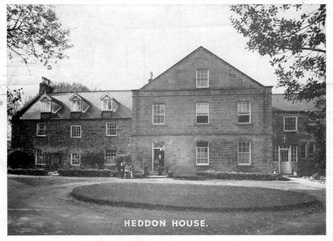 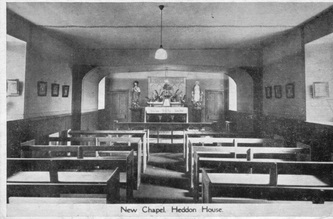 Heddon House, an eighteenth century building, was suitably furnished and given by Alderman and Mrs. Weidner to the use of the Roman Catholic Society of St. Vincent de Paul in memory of their son, Charles William Weidner, Royal Field Artillery, who was killed at Ypres in 1917. The Home was officially inaugurated Saturday 15th October 1921 by His Eminence Cardinal Bourne. It is used as a Home of Rest for the poor of Northumberland and Durham, with accommodation for 40-50 persons, male and female, under the care of a matron. Residence of two to four weeks was free and admission obtained through the recommendation of the Society. The Home was provided with an abundant supply of milk, butter, eggs, free of charge from the farms on the estate. 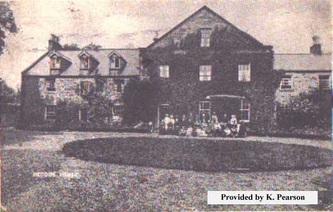 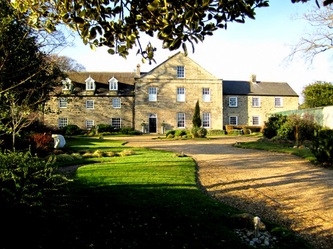 Heddon House was purchased by the current owner in the early 21st century when the house and its three neighbouring dwellings required complete renovation and modernisation. The owner completely restored the main house and adjacent buildings into four luxury homes. South facing Heddon House is the largest and finest of the four, with two at the rear and a separate wing at the side. It was available for sale in early 2011 at a guide price of £995,000. Heddon House is a Grade 2 listed building.
The extensive gardens attached to Heddon House were taken over by William Nicholson Hall who settled there in April 1921 and lived in a house at Heddon Steads. By dint of hard work and perseverance, Mr W N Hall and his sons have gained for themselves a nationwide reputation as one of the leading growers of dahlias and chrysanthemums. After the death of an infant son, Mr and Mrs W N Hall suffered further grievous losses in the death of their eldest son William, who as a member of a bomber crew was shot down over Holland during the Second World War; their eldest daughter Rita married and died shortly after the birth of her first child.

The Hall faimily were staunch supporters of the church where Mr Hall was a choir member for nearly 40 years. In addition to their church duties, William, Tom and Stan Hall served as captains in the Heddon Branch of the Boys Brigade.

The West Heddon Nursery Gardens are now the property of the Northumberland County Council, having acquired them from the Weidner family, but are still in the tenancy of W.N. Hall & Sons. The Hall family further extended their field of horticulture when in 1948 they bought land at Ovington and had their house built there, now known as Ovington Nurseries. 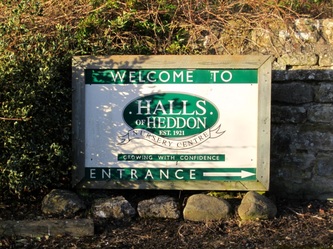 To the north of the farmhouse at West Heddon, itself a curious old building, is what seems to be half of a manor-house of the Reads with a good doorway and Jacobean windows, now used as a cottage.

Halls of Heddon - A Potted History