Houghton & Close House township
from an article by George Clark

After the Norman Conquest the Barony of Styford, of which Heddon Parish was an isolated portion,was given over to the Bolbec Barons, who came from the town of Bolbec,near the mouth of the Seine in Normandy. The 'Testa de Neville' of 1240 gives us the name of Sibilla de Crauden as the sub-tenant of Houghton from the Bolbecs. From the Craudens, Houghton passed by marriage to the Turpins. 'Torphinus' was an old name in the north; but the infamous Dick Turpin had no connection with this family.

One of the earliest and most interesting records of Houghton is preserved for us in the Heddon Guard Book, now in the keeping of Newcastle's Black Gate Library. It tells of a great lawsuit between Richard Turpin of Houghton and the Prior of Tynemouth, to which the monastery Wylam belonged, in order to settle a boundary dispute between them in the year 1290. The chief point in dispute was whether Turpin or the Prior had most right to one half of 10 acres of moor, 20 acres of ploughed land, and 60 acres of wood in Houghton. The jury consisted of 12 knights and Turpin won the day.

In the description of the boundary then defined, many of the old names continue to this day. Starting from the 'Thwertonerdyke' as the Roman Wall was then called, northwards to 'Houghton Strother' (the Hassock Bog), westward along a stream to 'Redeford', south to 'Holleford' (Holeyn Hall), onwards to 'Ryfdenbourne' now called Rift Dean Burn near Rift Farm. It followed the 'Sygpeth-Way', an old road leading from Street House to Rudchester Roman Fort; turning east it led to 'Albery Strother', an old English settlement near Close House, which owing to the corruption of 'Albery' into 'Abbey' was afterwards incorrectly called 'Abbey-le-Close' and later became known as Close House.

The right of grazing the common in Houghton was reserved to the Prior. This mentions 'Bromehille', now Broomy Hill, a woodland hill to the west of Heddon Common, south to 'Greneleghe', now Close Lea. From the 'Thornrawe' to the 'Alde-heway', the old highway which led from the Roman Wall through the Glebe Land and Houghton direct to Wylam; 'Ravensburne', now Ravens Dean; the two 'Standande-stanes', standing stones south-east of Close House mansion, the tops of which were still visible until recently. The 'Fisher-Way', the path by the side of the Tyne; from Newburn, the Fish Path struck across the fields through West and East Denton Denes towards Elswick Road.

At the time of this law suit, there existed a chantry and chapel with a tower attached to the old mansion at Abbey-le-Close (Close House). As Lord of the Manor, Richard Turpin assumed the right to present the chaplaincy and appointed Ralph de Thuysill as perpetual chaplin to the chantry. On the death of Thuysill on 7th July 1312, a certain John Abel, by some means or other, contrived to be admitted by the Bishop of Durham to the chaplaincy. When Turpin remonstrated against this, the Bishop requested the Archdeacon and ruridecanal chapter (among whom were the Vicars of Heddon and Newburn), to inquire into the value of the chantry and the true patron. They met on 12 June 1313 and reported in favour of Turpin; the chantry was worth 60 pence annually and Turpin presented the chaplaincy to Laurence de Hunnyugburn.

Not content with securing the patronage, the subsequent generation sof Turpins had taken actual possession of the chantry property. On 2 December 1415, henry V directed a writ to the Escheator of Northumberland to inquire into the possessions of the Abbey-le-Close chantry. From the report of the inquiry held at the Castle of Newcastle upon Tyne on the first Thursday in january 1416, before Robert Lyle and a jury of twelve, we learn that there belonged to the chantry a messuage, a chapel, 50 acres of tillage and 10 acres of meadow; all these had been in the possession of Nicholas Turpin for his own use and profit ever since 16 April 1391. The jury passed no judgement.

Houghton and Close House appear to have passed by marriage to the family of Reade some time between 1416 and 1424, while a branch of the Turpins continued at Whitchester. At the dissolution of the chantries by parliament in 1547, the lands belonging to Abbey-le-Close are said to have been granted by the King to the Radcliffes, and subsequently purchased from them by the Reades who continued in the parish for seven generations. With their estate so encumbered with a family of five sons and seven daughters, in 1620 the Reades sold the manor, chantry and chapel of Abbey-le-Close and the whole hamlet of Houghton to Robert Bewicke of Newcastle. Mr Clement Reade, gentleman in Yorkshire left in his will when he died in 1668 "the sum of five pounds to ye churchwardens of ye town and parish of heddon on the Wall, in stock, and six shillings yearly thereof interest to be distributed unto ye poor of ye town of Heddon the last day of December for ever". The disappearance of all the funds left for the poor of Heddon gave rise to a great scandal.

Robert Bewicke was Mayor of Newcastle in 1628 and 1629; he was the elder son of Andrew Bewicke, Mayor in 1538. Andrew was the third son of Peter Bewicke, Sheriff in 1477 and Mayor in 1490. A direct descendent, Calverley Bewicke of Close House, Sheriff of Northumberland in 1792 and MP for Winchelsea in 1806 and 1812, at his death without issue in 1815, left the reversion of his estate to his nephew, Calverley Bewicke Anderson, who thereupon assumed the surname of Bewicke from which has issued the present members of that family.

Recorded in the parish books by Vicar Birkett are a communion service on 2 January 1708/9; a baptism on 7 July 1712 and a marriage 24 June 1718 all solemnised in the chapel of Close House. The Bewicke's family vault was in St Nicholas Cathedral until the middle of the 19th century. The now have a vault in Heddon churchyard, alongside of which a vault made at the expense of Sir James Knott and never used by him, was acquired by the Bewickes as an extension to theirs. Close House was temporarily vacated by the Bewickes from 1909 until 1929; they returned and remained until the 1939 war period when it was used in turn: for evacuees, as a convalescent home, a home for backward children and as a nurses training centre.

Street House, a hamlet near the riverside and alongside the railway comprises a row of four cottages and formed part of the Close House estate. Formerly one large farmstead named Street House, it was demolished and with the materials were built these four cottages, retaining the same name and occupied by fishermen and their families employed by the Bewickes.

The Close House Mansion with its drive and private grounds were sold, the buyers intending to commence a cheese factory which did not materialise. It was then acquired by King's College for development as an educational and cultural centre. The three principal farms, Rift farm, Houghton North and Houghton South Farms are now individually owned, the latter by Messrs. William Leech, builders, from whom permisssion has so far been withheld for housing development.

It was during the temporary absence of the Bewickes when the late Sir James Knott became associated with Close House; Sir James took a lease on the estate for five years in November 1909, this was later extended for a further period of 15 years to expire in 1929. Many places on Tyneside owe much to his benevolence, not least Heddon where we have many instances of his and his heirs generosity. Sir James, a millionaire shipowner, did not stay at Close House for the full tenure of his 20 year lease, the reason for his departure was never quite known, but it was in 1924 when he decided to leave the country and went to the island of Jersey to reside.

He was the owner of much property in Heddon, having acquired it from the Clayton estate and which on his departure was the subject of a sale by auction on 11 March 1924, comprising in all of 32 lots including East Town Farm, Blue Row, Clayton Terrace, The Three Tuns Inn and other dwelling houses, some of which were sold privately to the tenants prior to the sale at agreed prices.

Sir James aspired to create Heddon into a model village and did actually make a start to do so with the building of two houses named 'Greycroft' and 'Zenda' situated just west of The Three Tuns Inn; his plan never came to fruition for the scheme came to an abrupt end when he left Close House.

His first wife, Lady Margaret Annie Knott died aboard their yacht in march 1929; James Leadbitter and Basil, their two sons were killed in action during the first World War, their third son and heir, Sir Garbutt Knott resided at their family residence in Torquay. 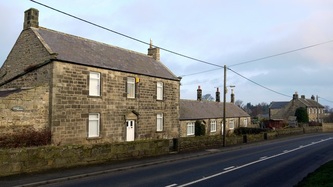 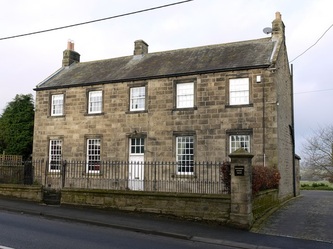 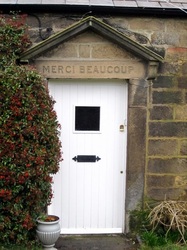 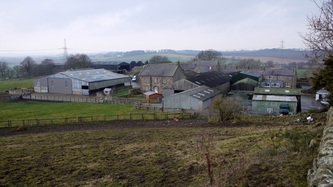 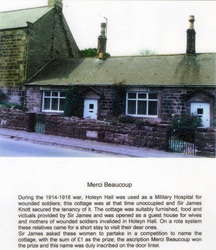 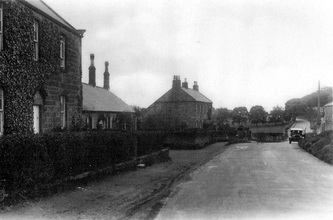