The following article is by Pat Farnaby and first published on his previous village web site.


James Knott, was born on the 31st of January 1855, at Howdon on Tyne. He was the eldest of ten children. His father, Matthew, was a Customs Searcher and his mother's name was Margaret. He was educated at the Scotch School in North Shields, which he left at the age of 14.

He had other family in the area, including an uncle who worked in Howdon Ropeworks, and another who was the only chemist and druggist in Willington Quay.

At the age of 14 James Knott found a job as an office boy in a shipbroker's office on Newcastle Quayside. At the age of 19 he he started as a shipbroker, reputedly borrowing the sum of £500, part of which he used to purchase an old collier brig, called the "Pearl" for £186.

Sir James Knott has been described as a strong, genial, vigorous, enthusiastic and courageous man. He was noted to have a retentive memory and to be very observant. He was a regular attender at church and an ardent Conservative. In the 1906 election he stood unsuccessfully as Conservative candidate for the Tyneside Division of Northumberland. In the 1910 election he became Conservative MP for Sunderland, but retired in December 1910, after only a few months in office. He was a barrister, called to the Bar at Grays Inn in 1889. He practiced for about four years before returning to his first love, shipping. He was also a J.P. for Northumberland.

In 1914 he held a commission in the Royal Navy Reserve, but was never called up, as his shipping expertise was so important to the war effort.

He was a keen gardener and enjoyed deep sea and coble fishing. In later years he enjoyed sailing his private yacht around the Mediterranean.

It was during the temporary absence of the Bewickes when the late Sir James Knott became associated with Close House; Sir James took a lease on the estate for five years in November 1909, this was later extended for a further period of 15 years to expire in 1929.

He was created a Baronet of Close House in 1917. His Coat of Arms bore the words 'Facta non Verba' which translates to 'Deeds not words'. He was a Knight of Grace of the Order of St John of Jerusalem in England.

In 1878 Sir James married his first wife Margaret Annie, the daughter of Rev. Thomas Garbutt, and they had three sons:
The two younger sons are buried side by side in the Reservoir Cemetery, Ypres. Apparently this is quite unusual, as tradition dictated that British servicemen were traditionally buried where they died, and Sir James must have exerted considerable pressure to enable the two sons to be buried side by side.

Both graves carry the same inscription: "Devoted In Life. In Death Not Divided." 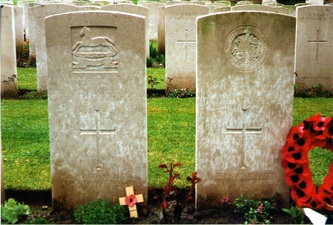 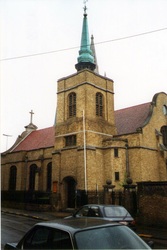 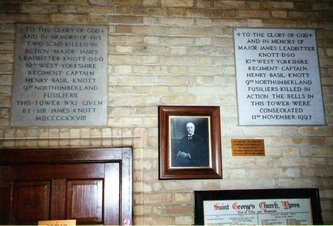 At various times the family rented property in the Newcastle area, including the Manor House at Jesmond, and also held the shooting rights at Minsteracres and Roddam Hall. In 1906 they moved from Jesmond to Close House. This was leased from the Bewicke family, initially for a period of five years, but later extended up to the period when Sir James moved to Jersey in 1928.

In 1925 the family moved to Samares Manor on the Island of Jersey. Lady Margaret Annie Knott died, (just after their Golden Wedding aniversary) on board their yacht, in Cannes, on March the 8th 1929, at the age of 74.

Sir James did remarry, in 1932 at Monte Carlo, to Miss Elizabeth Chystie Gauntlett, the 25 year old daughter of Colonel V. C. Gauntlett, and his second wife died in Jersey, on the 23rd of November 1998.

Sir James Knott died on the 8th of June 1934, in Jersey. His funeral was held in Jersey, on the the 12th of June, with a memorial service being held at St Andrew's Parish church, in Heddon, on the same day.

Sir Garbutt Knott, who inherited his father's title in 1934, lived at a property called Courtlands, near Exmouth in Devon. Here he raised Jersey cows and was a keen pigeon fancier. Although he was married twice, he died without issue.

Samarès Manor is located on the island of Jersey and dates back to at least the 12th century. Sir James purchased Samarès Manor in 1924 and retired there. He was responsible for much refurbishment of the property, reputedly spending around £50,000 on the gardens alone, between 1925 and his death in 1934.

Samarès Manor, which is open to the public, belongs to the Obbard family, after Lady Elizabeth Knott married Commander Edward Owen Obbard D.S.O., G.M., RN, in 1943.

Images above reproduced from the Samarès Manor brochure with kind permission of the Seigneur.

From the single collier brig, purchased in 1869, James Knott built up to over 20 collier brigs, all plying their trade along the east coast, managed from an office in Milburn House, Newcastle. James Knott had vision and was quick to see the possibilities of changing technical developments in the shipping industry, in particular the value of steam.

Throughout the time that he was in the shipping business Sir James had 32 ships built in Tyne and Wear shipyards, primarily by Short Bros. All the ships carried the following warning inscribed on their bridges:

'All accidents are the Result of Carelessness'


Apart from shipping, Sir James had other business interests. In 1899 he purchased Togston Colliery and formed the Acklington Coal Co Ltd, which was later taken over by Broomhill Colliery Ltd. He also had an interest in an anthracite mine called the South Wales Primrose Coal Co.

In 1918, Sir James bought property in Heddon village from the trustees of the Clayton family. In 1924 they sold 32 lots of property in Heddon, including East Town Farm, Clayton Terrace, Blue Row, Garden House, the Blacksmiths shop and the Three Tuns Inn. Click the link for the auction catalogue.

The Knott family were great benefactors to the north-east and in particular to the village of Heddon on the Wall, where they had a major influence on the village, as we know it today.

The Knott family were responsible for creating the Memorial Park, in Heddon, opened in 1925, in memory of the two sons who were both killed in action in the Great War: Major James Leadbitter Knott D.S.O. of the West Yorkshire Regiment and Captain Henry Basil Knott of the Northumberland Fusiliers.

The Knott Family also gave to the village of Heddon, the Knott Memorial Hall, erected in 1936, in memory of Sir James and Lady Margaret Annie Knott, by their son, Sir Garbutt Knott.

The Knott family have also been responsible for many other charitable works in the north east including the following:

It has been suggested than when the plans were being made to erect the Knott Memorial Hall in Heddon, three alternative sets of plans were drawn up. One of the sets not used in Heddon, was used to build the Church Hall in Fenham.

Sir James was responsible for establishing the Sir James Knott Trust, which is responsible for making payment to registered charities, currently around £1 million pounds each year funded from investment income. The trust was originally administered from Jersey but has more recently moved to Newcastle. The aim of the Trust is to help improve the conditions of people living and working in the North East of England. The Trustees try to follow the wishes and interests of the Trust’s founder where this is compatible with the present day needs of the North East.

Today the Sir James Knott Trust funds the College Valley Estates which owns the College valley, a beautiful and remote area of north Northumberland. In 1980, together with the Duke of Northumberland, the Trust bought  Chillingham Park which includes the land on which the Chillingham herd of wild white cattle are kept. It was then managed by the Knott Trust's agents: College Valley Estates who granted a 999 year lease of the park to the Chillingham Wild Cattle Association. In 2005, after a fund-raising campaign, the association purchased the park and surrounding woodlands. Thus, the herd and the park were reunited under the same ownership. 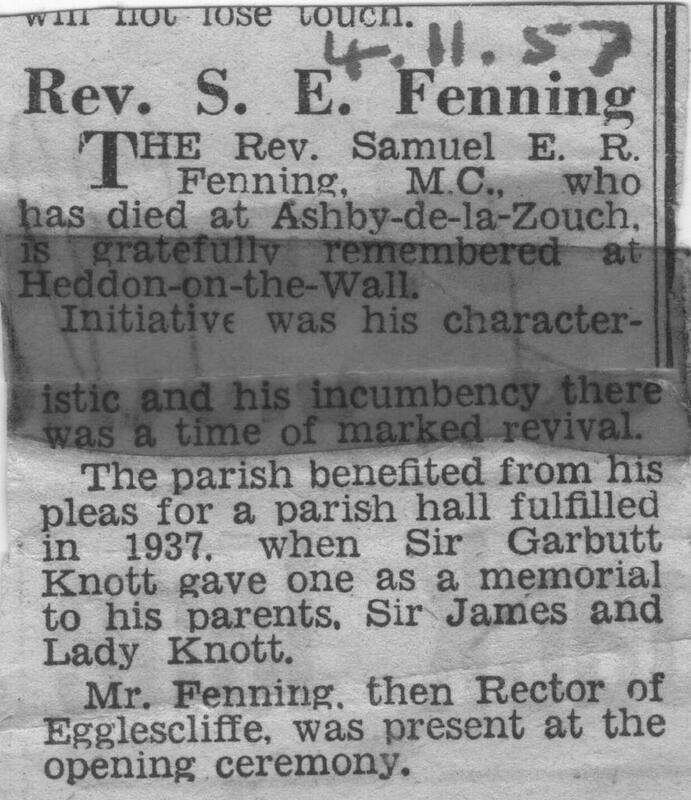 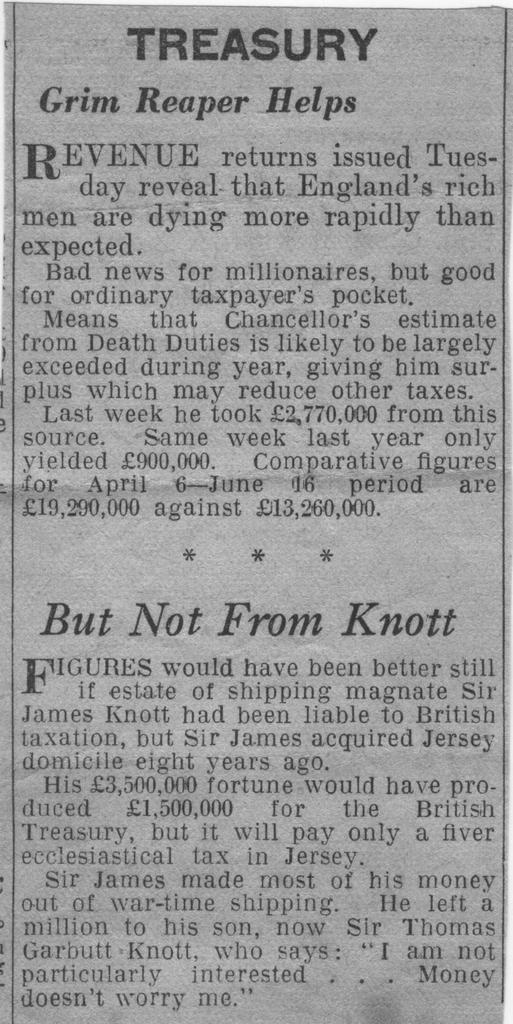