THE WALL DITCH, BAYS LEAP, HEDDON ON THE WALL

During the course of trenching to the north of the Wall on Bays Leap Farm, undertaken on behalf of the Inspectorate of Ancient Monuments in December 1956, a cutting was made across the Wall ditch 210 yards east of the site of turret 12b (North Lodge). At this point there is a natural slope downwards from east to west and from south to north. The berm and Wall to the south are overlaid by the modern footpath and road.

The Ditch
The ditch had been cut through firm shale, and was twenty-seven feet wide between the lips, the southern lip being three feet higher than the northern. At the centre the ditch was six feet ten inches deep, measured from a line joining the two lips. In the blue clayey silt which filled the bottom two feet of the ditch the angle of the northern scarp was steeper than that of the southern. Above the silt level the angles of both scarps became less steep, probably due to more prolonged weathering. The few published sections of the ditch, some conjectural, generally show sides of equal gradient, but Parker Brewis from sections cut in 1931 found that the northern scarp was sometimes much steeper than the southern.1

The narrow, flat-bottomed channel noticed at various points in the bottom of the Wall ditch2 and in Roman military V-shaped ditches elsewhere,3 was not found here. On the contrary, the bottom of the ditch was unusually wide, and, apart from an extremely slight ridge in the centre, fairly flat. Weathering and recutting probably accounted for the absence of the V shape and the channel. On the other hand the ditch was shallow by normal standards,4 and the possibility that the original work had ceased before the regulation shape had been excavated should not be overlooked. If the method of digging a wide ditch in the initial stages was to work from two trenches, a possibility suggested in view of the findings at Camp D at Cawthorn in the N. Riding of Yorkshire,5 then a stage would be reached where the ditch would present a fairly wide, flat bottom, as occurs in the Vallum ditch. With such a method, where the two working trenches would give place to one as the scarps converged, the channel found at the bottom of the Wall ditch need be no more than the stub end of a working trench rather than a specially constructed drainage channel. If work on the ditch at Bays Leap had ceased prematurely, the reasons for the interruption are not obvious, unless it was decided that the depth from the south lip was sufficient, or that the band of crumbling coal shale underlying the ditch and already encountered at the bottom of the north scarp should not be removed.

Ditch Filling
The blue clayey silt in the ditch bottom, similar to that encountered in the shale at Chapel House,6 contained in the lowest six inches an amount of coal shale and very small fragments of carbonized wood. Nine inches below the top of the silt there was a thin band of staining caused by disintegrated stone chippings which had come from the south side of the ditch. Tumbled stone and loose fill overlay the silt. The stones had again come from the south side of the ditch, but only two were dressed. These are discussed below. An accumulation of tumbled clay formed the rest of the filling below the top soil. The water main from Whittle Dene reservoir, shown in the section, follows the line of the centre of the ditch from the east side of Rudchester fort to Heddon village.

Upcast
The upcast was standing to a height of one foot six inches on the north side of the ditch and had slipped forward over the lip. Thirty feet out from the lip the upcast was no more than a thin band of clay. At this point there had been later interference, including the sinking of a circular pit eight feet in diameter. There were slight surface indications of a number of pits in the vicinity, all of which no doubt represented later unrecorded coal winning activities on the line of the Brockwell seam outcrop. A few shallow depressions immediately to the north of North Lodge and at a distance of seven to eight yards from each other were clearly the remains of old bell pits.7

An unusual feature was the thick band of compact clay overlying the old turf line on the south side of the ditch. In view of the slope downwards from south to north this could have represented later levelling. An amount of clean sand immediately beneath the turf level was probably connected with the laying of the footpath or the building of the boundary wall.

Chamfered. Stone Slabs
The two sandstone slabs already mentioned were of like size and shape, being approximately five and a half inches thick, one foot three inches broad and tapering down to nine inches, and one foot six inches long. The chamfer in both cases was at the broadest end. Similar stones have been found in the past at the foot of the north face of the Wall at Heddon Great Hall,8 Rudchester,9 Plane Trees,10 west of Chesters fort, and west of Housesteads fort. In more recent excavations carried out by the Minister of Works on the Wall to the east of Birdoswald fort, our member Mr. C. Anderson has found a large number of these chamfered slabs of varying sizes at the foot of the north face of the Wall. When discussing the stones from Heddon Great Hill Parker Brewis suggested that they could have come from a string course or offset at the base of the parapet walk. Mr. Anderson has suggested to me that an offset could have occurred at the level of a bonding course about six feet from the footings. At Birdoswald there is such a course of flat slabs running from the south face of the wall through the core, but unfortunately the facing stones of the north face stop short at the course below this point, so that no slabs, chamfered or otherwise, have been found in position. In the narrow wall sector similar courses are visible on the south face of the north wall of Milecastle 37 and on the south face of the Wall on the crag west of Housesteads fort, but in neither case are they showing on the north face. Where bonding or string courses show on the outside faces of fort walls, north of the west gate at Housesteads and north of the east gate at Birdoswald, the stones are not chamfered. The fact that these chamfered stones appear in most cases to have been found at the footing level of the Wall seems to give strength to the original suggestion of Parker Brewis that they came from a point near to the top of the Wall, probably at the parapet walk. The lack of depth of some of the stones at Birdoswald might indicate that the chamfer was uppermost, but this is by no means certain. 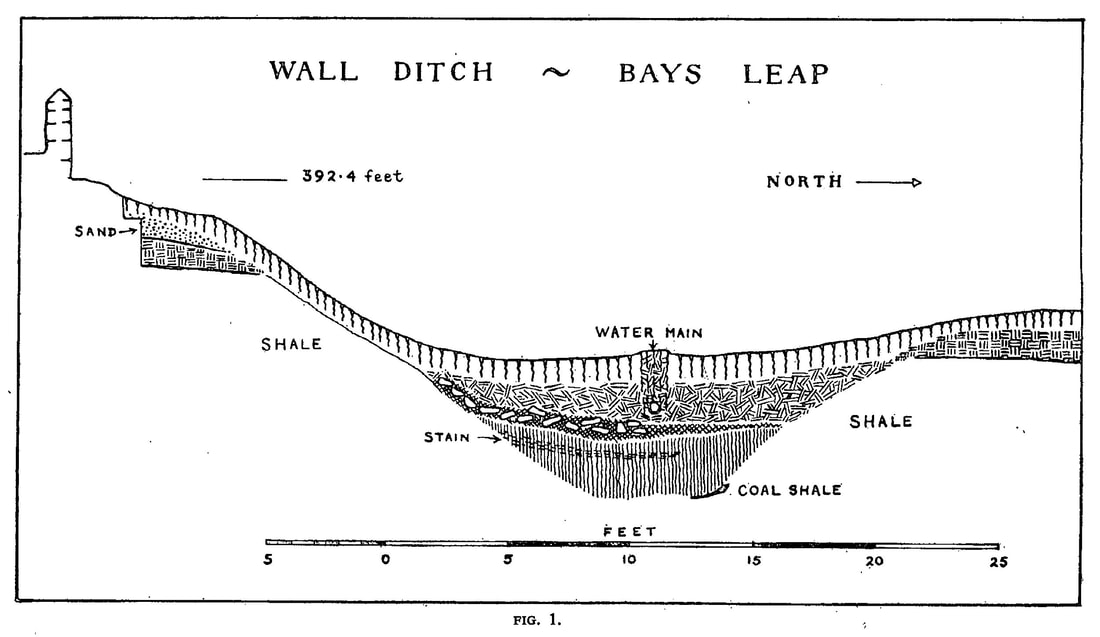