Eachwick would seem to have been, after the English conquest, the "wig" or fortified abode of a noble bearing a name like Acca. Half the manor of Eachwick was given to the prior and convent of Hexham, about A.D. 1140, by Eobert, son of Hubert de la Vale and his mother Richolda ; and Richolda confirmed to them her rights in the other moiety. The Delavals held the adjoining manor of Dissington in capite. The tenants of the demesne lands of the prior at Eachwick had the right of grinding their corn free at the Dissington mill, the next turn after the lord's ; eight of the prior's cottagers there might choose what mill they liked; but his seven bondagers were obliged to take their corn to Dissington, and pay multure, and as an acknowledgment for the profits thus conceded, the lord of Dissington was bound to always rise at the approach of the prior of Hexham and offer him his seat, unless he was prevented 'by the condescension of the superior,' while his lady was every year to offer, on St. Andrew's Day, two corporax cloths at the high altar of Hexham. [77]

During the reign of Henry III., Peter de Faudon gave 7 acres at Eachwick to Hexham Priory. It received also 10 acres there from Thomas de Echewyk. All these grants were, in consequence of the originals having been burnt by the Scots, made the subject of an inquisition taken at Newcastle, the Friday before Holy Cross Day, A.D. 1295, by a jury, on which Richard Turpyn and William de Echewyk served, and confirmed by Edward I. in the charter of Inspeximus given there under the Great Seal, 23rd November 1297. [78]
Edward II. granted a license at Pontefract, 12th February, 1823, for the Prior and Convent to further receive, as part of twenty librates to be excepted from the action of the statute of mortmain, one messuage and 18 acres of land at Eachwick from William de Belyncham. [79]

Their next acquisition of rights in this neighbourhood was the result of rather complicated transactions. John de Faudon, lord of that manor, gave, it appears, all his lands in Eachwick, Whitchester, Harlow, and Dalton, to William de Hoghton, and his lawful issue, at a rent of 25s. 8d. in perpetuity, but in default these lands to revert to himself and his own heirs. This rent-charge he afterwards made over to the Prior and Convent of Hexham. His reversionary interest he gave to Gilbert de Minstre-acres, chaplain, and Thomas de Raneton; and this they transferred also to the Prior and Convent. William de Hoghton did die without issue, [80] and Gilbert 'le Milnestonacres' obtained a special license from Edward III. at Eeading, 20th June, 1347, to assign the lands in question, consisting of 9 messuages, '161 acres of arable, and 5 acres of meadow, to the Prior and Convent. [81] They accordingly took possession of 5 husband-lands of 24 acres each, with cottages at Eachwick, but they failed to enter on the lands at Harlow, in Prudhoe Barony, for want of a license from the Earl of Angus, who was John de Faudon's immediate over-lord there. [82] This license, strange to say, they never applied for, though the Black Book, completed in A.D. 1479, still has a careful memorandum that the scattered lands of John de Faudon might always be recognised by the fact of their being the southernmost of the long strips into which the arable fields of the peasantry were then divided.

The Black Book of Hexham gives [83] a list of the possessions of the House at Eachwick which is worth translation on account of the curious local names borne by them in the fifteenth century.

The Prior and Convent, then, held there one capital messuage the hall, or manor house with four gardens and two tofts ; also, a ploughed croft of half-an-acre on the north side of the "Hellilaw-thornes," another containing a rood
of meadow to the north near the manor-house, and a third of half-an-acre to the west on the 'Hogh-lawe.' They held also 88 acres of demesne land (in tillage) there, viz. : 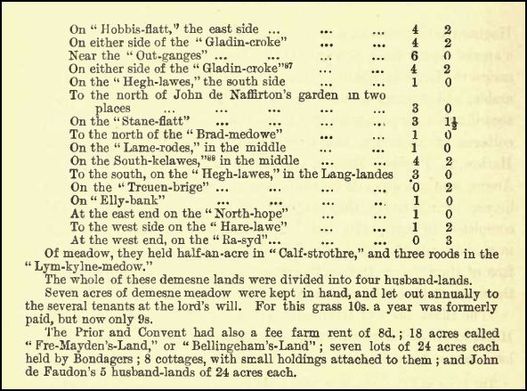 In all, there had been formerly twenty-two holdings which at the end of the fifteenth century had come to be in the hands of eight persons. The Scottish raids and the .Wars of the Roses may account for this and the number of ruined tofts and waste lands. As a picture of the state of village society in Northumberland at the time, the names of these persons, the nature and extent of their holdings, and the rents paid, shall be here given: 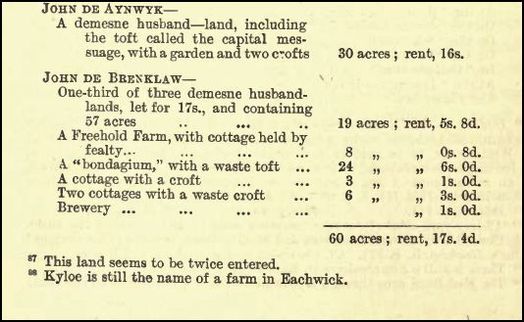 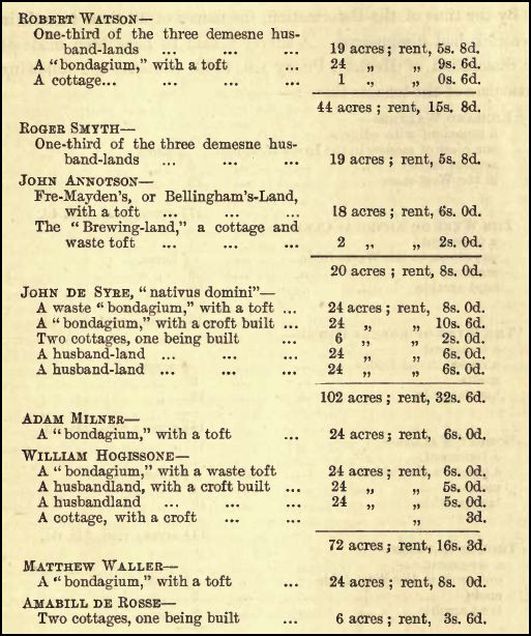 The largest farmer in the village appears from this to have been John de Syre, the 'nativus domini', or serf. This is very remarkable if it be true at that time, in the eye of the law, a 'nativus domini' was 'really a slave and belonged to the lord as much as the negro did to the planter.' [89]

By the time of the Reformation, the names of all these tenants in Eachwick had disappeared. A survey [90] said to have been made at the dissolution of Hexham Priory A.D. 1536, contains the following particulars of the tenants there: - 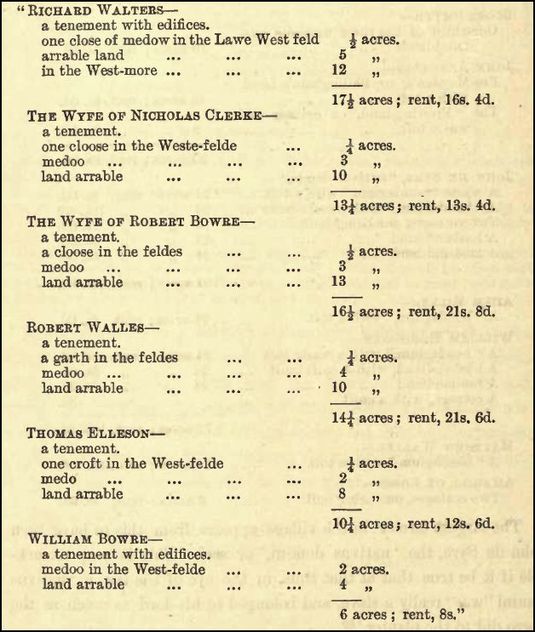 The Abbey of Newminster was also possessed of lands in Eachwick under the following circumstances:

On 3rd May, 1386, John Basset, son of William de Whalton and Isabel his wife, sister and heir of John Basset, of Cowpen, granted all his lands and tenements in ' Echewyke ' to John de Whitlawe. The execution of this deed was
witnessed at Eachwick by Alexander de Cresswell, John de Midelton de Slikburn, Will, de Cratnlington, Robert de Bellingham de Hirste (?), William de Spens, and many others. [91] These same lands, [92] which appear to have formed part of the dowry of Marjory Lisle, wife of William de Mitford, 'gentilman,' of Mitford, and to have consisted mainly of four husbandlands and two cottages, were granted by his son John de Mitford to Robert Elmet by a deed dated Eachwick,26th June, 1426, in the presence of Sir William Heron, sheriff of Northumberland, Sir John de Mydylton, escheator of the county, Robert de Musgrave, Nicholas Turpyn, Simon de Weltden, and others, with an accompanying proviso that if within the four following years, John de Mitford should pay ten pounds of good and lawful money of England to Robert Elmet or his heirs, &c., at the altar of the Blessed Virgin in the parish church of Stamfordham, this grant should be void, and John de Mitford re-enter into possession at the expiry of a year, during which Robert Elmet was to remain at the rent of 23s. [93] The £10 was no doubt the original purchase money, and the 23s. represented the interest yielded by that amount invested in land at that time. In order that no questions arising from settlements or entails might invalidate this grant, John and Marjory de Mitford gave a bond for £45 to Robert Elmet, 28th June, 1425, which, however, was to be of no effect as long as he continued undisturbed in his possession by them and their heirs [94]. On 8th May, 1489, Robert Elmet of ' Echewyk' granted there these lands to John Androwson, chaplain. William Jaye, and Alexander Watson of Morpeth, and constituted Robert Horsley, of Mylnburn, his attorney for giving them possession : on the 15th of May, at Morpeth, he confirmed the transfer of them by these trustees to Robert Charleton, abbot of Newminster, and his convent.[95] To be perfectly safe, the abbot got Bartrand de Mitford, of Mitford, to renounce any possible right he might have to them, by deed at Newminster, 31st December, 1489. [96]

The half of the 'demeynes de Echewyk,' which had been in the occupation of John Mastilion deceased, was conveyed, at Eachwick, 10th April, 1466, by Robert Preston to William Thomson, merchant ; as was also a messuage there, inhabited then by William Elder, and formerly by his father Thomas Elder, to Thomson and Agnes his wife, 24th April, 1467. As security, Preston granted Thomson and his wife an annual rent-charge of four marks issuing from his lands at Hawkwell, and from a messuage at Eachwick, then inhabited by Robert Whyte, 20th February, 1472 ; this rent-charge, however, was to be suspended as long as they were left in peaceable possession of the mediety and messuage. Subsequently, by deed dated Eachwick, 4th December, 1475. Preston conveyed all his lands and tenements there to Thomson. In May, 1489, Thomson and his wife conveyed the same to John Androson, chaplain, William Harle, and William Jay, by deed at Newcastle, and constituted Christopher Rawe their attorney for giving possession: on the 16th of the same month there, they assented to the transfer of these lands to the abbot and convent of Newminster. [97]
On the Muster Eoll of 1538 only "Henry Blaklok, James Atchison, and Eauf Wallis" are returned for Eachwick, and they had "naither hors nor harnes." In the Feodary's Book, 1568, certain lands and tenements in Eachwick are mentioned as held by James Dodd and the heirs of John Ellison. [98]

After the Reformation, Roger Fenwick of Bitchfield purchased Eachwick Hall and divers lands of the Crown, to be held by fealty only, as of the manor of East Greenwich, subject to a certain fee farm rent, and in 1589 he settled the same on Anthony Fenwick, his second son. On 22nd Nov., 1611, George and Peter Ward sold to Mark Errington of Ponteland, as trustee for Anthony Fenwick, and George his son, a messuage and three farms in Eachwick. These and other lands Errington afterwards transferred to George Fenwick of Newcastle, merchant. 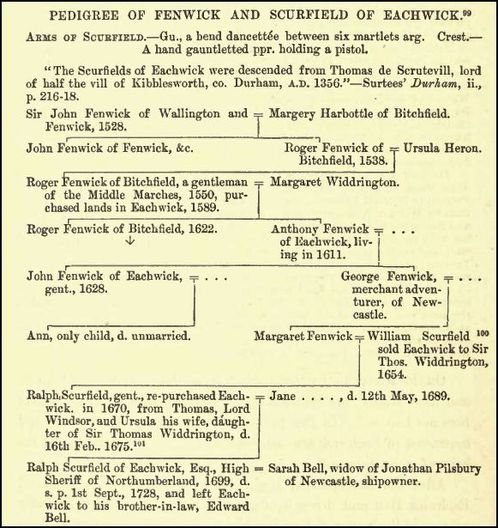 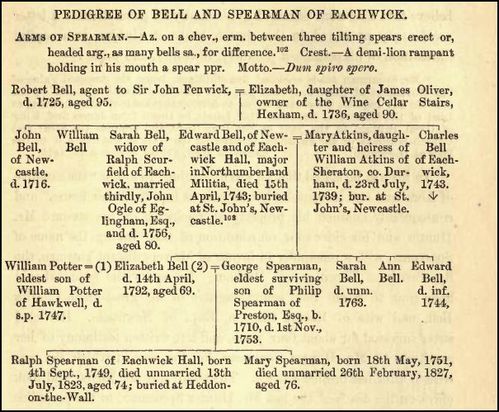 Ralph Spearman of Eachwick acted the part of a great antiquary, so much so that he was erroneously believed to have been the prototype of Sir Walter Scott's ' Jonathan Oldbuck.' It is doubtful, however, whether his learning was even so sound as that of the Laird of Monkbarns. [104] His vanity led him to endeavour to trace his descent and name from the ' lords of Aspramont, a castle and county on the confines of Lorraine and Bar.' His new hall at Eachwick was built entirely for show : being three stories high, with gingerbread battlements, and of great length, though only one room thick. At the time of the window-tax this led to its being rated at a very large sum. Seen from a distance, it quite deceives a stranger by its palatial appearance. Mr. Spearman was so far successful that the neighbourhood still believe that Eachwick belonged to his family for generations. A letter accidentally preserved in the church books at Heddon is a capital illustration of his combined pedantry, liberality, and pride:

In his will he stated that he was determined to follow "the example of Abraham, and to consider his Eleazar as heir to all his house," and consequently entailed his property at Eachwick on his steward Mr.Hunter and his elder sons, on condition of their taking the name of Spearman, with a remainder in favour of his very distant kinsmen, the Spearmans of Thornley, co. Durham. In equity the estate should have gone to Sarah Bell, granddaughter of his great-uncle Charles Bell, and wife of Eobert Clayton, Esq., of Newcastle. His aged sister survived for about four years, and left written testimony of her gratitude to Mr. Hunter Spearman for the way in which she was treated after her brother's death. The entail was not barred, and took effect on the death of the last Mr. Hunter Spearman, to the prejudice of his younger brother who is a land-owner in the township, and continues to bear the name of Spearman. [105]

The family longest connected with Eachwick were the Akensides. [106] The name of Thomas Akenside, gent., of Eachwick, appears on the list of freeholders in Northumberland in 1628 ; and immediately to the right on entering Heddon Church is a marble tablet to the memory of "Captain William Akenside of the 14th Regmt. of Foot, son of
William Akenside, late of Eachwick, who died 22 October, 1830, aged 49."  Mark Akenside, the poet (1721-1770), belonged to this family, of which his father was a younger son settled in business as a butcher in Newcastle, and it was his uncle of Eachwick who bore all the expenses of his education. [107]