Eachwick township
from an article by George Clark

It would appear that Eachwick, after the Norman Conquest, had been the 'wig' or fortified abode of a noble bearing a name like Acca, and was anciently called 'Achewic'. Strange to relate it was at this time about the year 709 when the Venerable Acca succeeded Wilfrid to the Bishopric of Hexham. Acca at the time of his elevation was neither abbot nor prior of the monastery there, but presbyter or chaplain to his predecessor. From the many bequests of land in Eachwick manor made to the convent one could be excused for asuming Eachwick to have formed part of the See of Hexham.

Around 1140, half of the Manor of Eachwick was given to the Prior and convent of Hexham by Robert, son of Hubert de-la-Vale, and Richolda his mother also confirmed to them her rights in the other half. The Delavals held the adjoining manor of Dissington in Chief. The tenants of the demesne lands (manor houses and the land attached to them) of the Prior at Eachwick had the right of grinding their corn free at Dissington Mill, the next turn after the lords; eight of the Prior's cottagers there might choose what mill they liked; but his seven bondagers were obliged to take there corn to Dissington and pay multure, and as an acknowledgement for the profits thus conceded,the lord of Dissington was bound to always rise at the approach of the Prior of Hexham, and offer him his seat unless he was prevented 'by the condescension of the superior', while his lady was every year to offer on St Andrew's Day, two corporax cloths at the high altar of Hexham.

Hexham Priory received two gilfts of land at Eachwick during the reign of Henry III; Peter de Faudon gave seven acres there and also 10 acres from Thomas de Echewyk. In consequence of the originals having been burned by the Scots, these grants were made the subject of an inquisition taken at Newcastle the Friday before the Holy Cross Day 1295 by a jury on which Richard Turpin and William de Echewyk served, and confirmed by Edward I in the Charter of Inspeximus (a Royal grant) given under the Great Seal 23rd November 1297.
The Prior and convent of Hexham further received, granted by licence, Edward II at Pontefract, 12 February 1323, one messuage and 18 acres of land at Eachwick from William de Belyncham. The lands of John de Fawdon, lord of the manor of Eachwick were involved in some complicated transactions and eventually assigned to the Prior and convent by a special license from Edward III at Reading 20 June 1347, and they accordingly took possession of five husband-lands of 24 acres each with cottages at Eachwick.

A list of the possessions of the House of Eachwick is given in the Black Book of Hexham.This contained many curious names, some still in use today: 'Swarden-syde' (now Swardenburn), 'Medeburne-syde (the Medburn runs through Eachwick and Dissington to the River Pont), 'South-Kelawes' (now Kyloe, a farm at Eachwick). The list shows the totalpossessions of the Priory at Eachwick at about 437 acres divided into 22 holdings,the tennants of which had pasture in common on the moor between Eachwick and Whitchester. By the end of the 15th century there were only eight tenants engaged there; the number of ruined tofts and waste lands at this period would probably be the result of the Scottish raids. A survey made at the dissolution of Hexham Priory in 1536 showed only six tennants farming 78 acres in Eachwick;only Henry Blaklok, James Atchison and Rauf Wallis are returned for Eachwick on the Muster Roll of 1538 and are described as having "neither hors nor harnes".

The Abbey of Newminster was also possessed of lands in Eachwick and certain lands and tenements are mentioned as held by James Dodd and the heirs of John Ellison in Feodary's Book 1568. After the Reformation, Roger Fenwick of Bitchfield purchased Eachwick Hall and divers lands of the Crown to be held by fealty only as of the manor of East Greenwich. The trustees of his son and heir, Anthony and grandson George, sold to Mark Errington of Ponteland a messuage and three farms in Eachwick on 22 November 1611.; afterwards Errington transferred these back to George Fenwick a merchant of Newcastle.
This part of Eachwick passed from the Fenwicks by the marriage of George Fenwick's daughter and heiress Margaret to William Scurfield who sold the estate to Sir Thomas Widdrington in 1654 but was re-purchased in 1670by Scurfield's son Ralph. The second Ralphe Scurfield of Eachwick, High Sheriff of Northumberland1699 married a Sarah Bell but with no children settled the estate on his brother-in-law, Edward Bell. The estate passed by marriage of Bell's daughter and heiress, Elizabeth, to George Spearman and thence to their son and daughter, Ralph and Mary Spearman. The former is said to be the model for the antiquarian, Mr Jonathan Oldbuck of Monkbarns in Sir Walter Scott's 'The Antiquary'; his new hall at Eachwick presents an imposing appearance and at the time of the window tax was rated at a very large sum.

Another farm which had been held by Richard Rutherford from Newminster Abbey was sold in 1611 to Thomas Clark and son George whose descendants held it until sold in about 1752 to Edward Collingwood. This farm was enlarged by the addition of 74 acres allotted to them on the enclosure of Eachwick common. Nothing more is known of this early enclosure, the remainder of the common was enclosed 1854. Having the longest connection with the township of Eachwick were the family of Akenside,the name of Thomas Akenside,gent,of Eachwick appears on the list of Freeholders in Northumberland in 1628. Mark Akenside, the poet, 1721-1770 belonged to this family.His father was a younger son settled in business as a butcher in Newcastle, his uncle of Eachwick bearing the expenses of Mark's education.

On the south aisle wall in Heddon Church is a marble tablet to the memory of Captain William Akenside of the 14th Regiment of Foot, son of  William Akenside,late of Eachwick who died 22 October 1830. Eachwick in 1825 comprised three farmsteads,a hall and 20 cottages. This was the peak of its population, 169 souls. There were three farmers, two cartwrights, a joiner, tailor, shoemaker and weaver. A directory of 1886 tells us of Edward Brown,a cartwright and reaping machine maker. 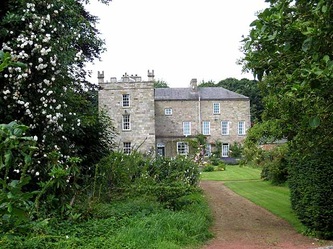 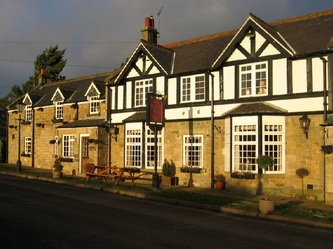 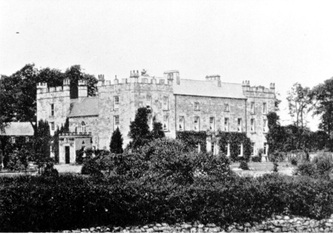