At the end of the thirteenth century the Bolbec Barony, on the failure of the male line, passed to two co-heiresses, Margery, wife to Ralph Fitzwilliam of Greystoke, and Philippa, wife to Roger de Lancaster. In the partition that took place between their representatives, William de Greystoke and Robert de Herle, in A.D. 1335, the manor of Heddon fell to the former, and so descended, like the Barony of Morpeth, through the Dacres to the Howards, Earls of Carlisle. [43] By analysing the entry relating to the Bolbec Barony in the Liber Niger [44] we find that in 1168, Whitchester and Houghton were, together with Wallington, held by Hugh de Oraudene as one knight'sfee; and West Heddon by 'Gospatricius' as 1/3 knight's fee. Some time before then Hugh de Bolbec had given ' Hedwine'
(East Heddon), and Angerton with Matfen, Fenwick, etc., etc., to William de Lisle, to whom, and his heirs, Walter de Bolbec confirmed them; [45] but though, on William de Lisle's death, his nephew Robert de Lisle succeeded to the other lands in this grant, he appears to have lost both Hedwine and Angerton, in spite of the sums he paid (1187-1197), to have legal recognition of his rights. [46]

The "Testa de Nevill" gives us the names of the sub-tenants of the Bolbecs in Heddon parish about A.D. 1240: Wydo de Araynis held East Heddon as 1/4 knight's fee; Sibilla de Crauden, Whitchester and Houghton; Eustace Delaval, Eachwick, as 1/2 knight's fee; and Robert de Hydewin del West, West Heddon, as 1/3 knight's fee; while Roger de Wycester paid 11d. a year for forty acres of land in Heddon-on-the-Wall, and Robert de Wycester 15d. for the same number there.

The Turpins appear not to have remained content with securing the patronage, but to have taken actual possession of the chantry property. At any rate, on the 2nd December, 1415, Henry V. at Westminster directed a writ to the Escheator of Northumberland, to inquire into the possessions of the chantry called ' le Cloos,' some of which were suspected to have been abstracted and alienated; and from the report of the inquiry, held at the Castle of Newcastle-upon-Tyne, on the first Thursday in January, 1416, before Eobert Lisle, the Escheator, and a jury of twelve, we learn that there belonged to the chantry a messuage, a chapel, fifty acres of tillage, and ten acres of
meadow, all surrounded by a ditch, but that these had all been in the possession of Nicholas Turpyn, for his own use and profit, ever since the 16th of April, 1391, but by what right they, the jury, could not say. After this wholesale appropriation on Turpyn's part, the jury were naturally able to add that no one else had taken anything from the chantry in question. [63]

In a curious French document, dated London, 2nd March, 1377, Joan, widow of "William de Graystok, the Good Baron of Morpeth (and of Anthony, the last Lord Lucy of Cockermouth and Langley, who died in the Holy Land in 1368), gives the custody of Nicholas, son and heir of Thomas Turpin of Whitchester, during his minority, to John
de Belasise. [64]

At the Inquisition taken in 1412, to prove the age of "William de Carnaby of Halton, Nicholas Turpyn gave evidence that he was in the church at Carnaby's baptism in 1391, and, in corroboration, mentioned that in going home he met divers huntsmen chasing a fox out of his wood. By a singular coincidence, another witness was John Bellasis, probably the same as Turpyn's guardian, who, while hunting a hare in the company of his friends, John Strother and Thomas Hasilrigg, met the women carrying the young Carnaby to church. [65]

At some time between A.D. 1415 and A.D. 1424, [66] Houghton appears to have passed by marriage to the family of Reade, while a younger branch of the Turpins continued at Whitchester. [67]  A sort of Old Mortality interest attaches itself to an ancient family that has long been forgotten in the parish where it lived for seven generations ; I
therefore give the - 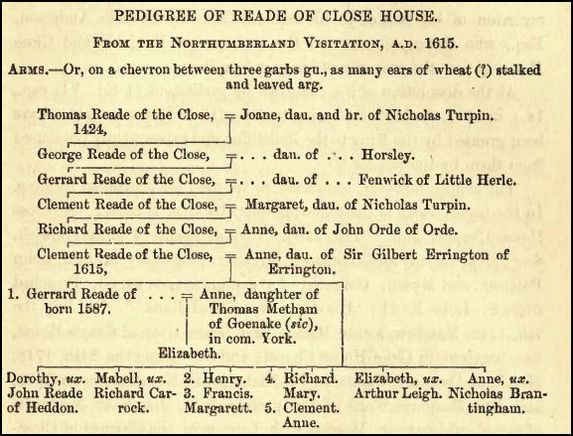 A family of five sons and seven daughters appears to have so encumbered their estates that, in 1620, the Reades sold "the manor, chantry, and chapel of Abbe-le-Close, and the whole hamlet of Houghton"[68] to Robert Bewicke of Newcastle. They do not seem, however to have forgotten their old inheritance, for "Mr. Clement Read, gentleman in Yorkshire, left by his last will and testament, at his departure in the year 1668 the sum of five pounds to ye churchwardens of ye town and parish of Heddon-upon-the-Wall in stock, and six shillings yearly thereof interest to be distributed unto ye poor of ye town of Heddon the last day of December for ever." [69]

Robert Bewicke of Close House was Mayor of Newcastle in 1628 and 1629. He was the elder son of Andrew Bewicke, Mayor in 1538, who was the third son of Peter Bewick, Sheriff in 1477 and Mayor in 1490. [70] His direct descendant, Calverley Bewicke, Esq., of Close House, High Sheriff of Northumberland in 1782, and elected M.P. for Winchelsea in 1806 and 1812, at his death, without issue, in 1815, left the reversion of his estates to his nephew, Calverley Bewicke Anderson, Esq., who thereupon assumed the surname of Bewicke, and Close
House is now the property of his grandson. [71]

At the dissolution of the chantries by parliament (1 Ed. VI. cap.,14.), in 1547, the lands belonging to that of Close House are said to have been granted by the King to the Radcliffes, and subsequently purchased from them by the Reades. [72] The chapel, however, continued to be used for occasional services. In the parish books is the following entry by vicar Birkett: "At Close House Chappel, Jan. ye 2nd, 1708/9 Communicants Thomas Bewick, Sen' , Esq., his lady and Daughter, Mr. Carr, Mrs. Mary Mitford, John Pattison, and Myself. Collected of ye communicants 8s. Od. Preached from St Luke 2, 21 : 'His name was called Jesus.'" On July the 7th, 1712, Matthew, son to Michael and Grace Gray of Gray's House, was baptized in Close House Chapel; and on "June the 24th, 1718, Mr. John Cowling, Curate of St. Nicholas', in Newcastle-upon-Tyne, and Mrs. Margaret Ward of the parish of St. John's in Newcastle aforesaid, widow, were Married with License in the Chappel of Close-House by Mr. Joseph Carr, Curate of St. John's." At the erection of the present mansion in 1779, the chapel, which stood on the site of the large bow-window, was pulled down.
<                                                                 >
60 Reglstrum Palatinum Dunelmense (Rolls Series), I., p. 423, referred to in Welford's Newcastle and Gateshead in the14th and 15th Centuries, p. 30.
61 Reg. Pal. Dun., I., p. 409.
62 Ibid. I., p. 410.
63 Cal. Inq. ad quod damnum. p. 369. 2 Hen. V.. No. 10. See Appendix B.
64  "As toutz ceux qui cestz lettres verount ou orrount, Johanne de Graystok, dame de Morpath, salutz en Dieu. Sachetz nous avoire graunte a Johan de Belasise del counte de Northumbre, la garde de corps et des terres ensemblement od la mariage Nicholays fitz et heire Thomas Torpen de Whechestre esteant en nostre garde per la mort de dit Thomas, et a cause de nounage le dit heire. Et pour ceo que le dit Thomas les dits terres de nous tient per service de chivaler. A avoire et teigner au dit Johan, ses executours et assignez a le ditz garde et mariage tanque au pleine age le dit heire ensemblement od toutz autres comoditez et profitz que purrount sourder et avener en le mesne temps par cause de garde durant la nounage de dit heire et nous 1'avandite Johanne dame de Morpath la dite garde de corps et des terres od la mariage de dit heire ensemblement od les profitz avantditz au dit Johan de Belasise garaunteroms et defendroms contre toutz gentz par y cestz noes lettres. Done a Loundr' desoutz nostre sealle le secunde jour de Marce, 1'ane nostre seigneur le Roy Edwarde tierce puise le Conquest
synkauntisme." Ancient Roll printed in Surtees Soc., 66, p. 296.
65 Forster's History of Cartridge, p. 193.
66 Nicholas Turpyn of Whitchester, 'gentilman,' and Thomas de Reede of the Close, gentylman,' gave a bond for 50 marks to Robert Elmet (see post, p. 265), to be paid at the feast of St. Peter, 'Ad Vincula,' next ensuing, on 8th June, 1424 (A'emmi-nster Cartulary, Surtees Soc., 66, p. 261) ; and Nicholas Turpin and Thomas Reide were on the jury that inquired into the right of presentation to Elsdon Rectory in RedesAs.\Q, 31st August, 1429. Hodg. Northd., III., ii., p. 44.
67 Nicholas Turpyn of Whitchester, 'armiger,' and William Howden of Bedlington, mason, granted a quitclaim of all their lands and tenements in ' Hughe ' (near Btamfordham) to Robert Elmet, 20th July, 1425 (New. Cart., p. 261).
Martyn Turpyn heads the Muster Roll for Whitchester in 1538 (see post, p. 259), and in the Liber Feodarii, 1568, is the entr : ' Turpin Tho ... Whitchester cu. cert, terris in Cholerton et Howghton' (Hodg. Northd., III., iii., Pref. Ixv.). 'Martin Turpen, Esqr -, counstable, of Morpeth,' in 1550 (Hodg. Northd.,[II., ii., p. 246), was an Enclosure Commissioner in 1552 (Leges Marchiarum, p.331). About the same time Matthew Turpen was a Gentleman Searcher of the Fords within Langley Barony (Ibid, p. 297). The family then disappear, leaving their name in Turpin'sHill (Hall?), a farm-house at Whitchester.
68 Burke's Landed Gentry, 6th ed., I., p. 124.
69 Heddon Register. The disappearance of all the funds left for the poor at Heddon gave rise to a great scandal. See Mackenzie's Hist, of Northd., Vol. II., p. 374.
70 The Bewicke family acquired the estate of Urpeth, co. Durham, in 164: for their full pedigree see Surtees's Durham, II., p. 193. William Bewick, of Newcastle, merchant, by his will dated 16th Nov., 1550, gives directions for being buried in St. Nicholas's, 'before Saynte Katheren altar;' and there, until recently, was the family burial-place.
71 Burke's Landed Gentry, 6th ed., I., p. 124. The arms of Bewicke are, Arg.,five lozenges in fesx gu., between three bears' heads erased sa. Each lozenge is usually charged with a mullet arg.; but these mullets being the difference of a third son, might now be omitted. Peter Bewick, as a second son, differenced the coat when Sheriff, in 1477, with a crescent gu, and when Mayor in 1490 with a crescent az. The bears' heads, originally plain, were borne lang'ited gu., by Andrew Bewicke as Sheriff, 1528, and have been subsequently muzzled or. The lozenges may be an adaptation of the fusils of Percy or Montagu, and the bears' heads point to Berwick. The crest, the head of a bugle (or wild ox), erased at the neck arg., armed, maned,and gorged with a mural crown, gu. (Burke's Landed Gentry, 1st ed., I., p. 93), is now blazoned as a goafs head, &c. &c.
72 Mackenzie's Hist, of Northd., Vol. II., p. 377, but this is probably fiction, as Close House Chapel was certainly not founded by the Ratcliffs of Cartington Castle, as stated by Mackenzie, and no mention of it occurs among the Certificates of Charities existing at the Reformation, preserved at the Public Record Office.