The Heddon history time-line is based on work by Pat Farnaby for his previous village web site.
Neolithic (4,000 to 2,500 BC)

Three Neolithic polished stone axes were found together by a Mrs S Munroe just below the surface while digging in the back garden of a house in Antonine Walk, Heddon-on-the-Wall in March 1963. Subsequent excavation recovered a further axe plus a possible rough-out and axe fragments, all apparently of the same light green igneous rock as the first three axes. Link

Two standing stones, the tops of them barely visible, used to stand in the field north of the Newburn and Wylam Railway, near Stannerford (Close House). They are mentioned ('Standande-Stan') in a boundary dispute of 1290 between Richard Turpin of Houghton and the Prior of Tynemouth. These stones have long been removed. Link

Cup and ring marked stones – no such stones have been officially recorded from Heddon but there is one carved boulder (although not in its original site) very close to the parish, just over the border at Throckley Bank Top Link and others just south of the Tyne in Ryton. Link Link Link Link
A water-worn, possibly cup-marked cobble was found  by the bed of the River Tyne just south of Close House by A Curtis in 2008.

Possible Bronze Age cairn on Turpin's Law, although reused for Roman burials (excavated in 1771 and 1795). Link

Bronze socketed and looped axe found while cutting a section across the Vallum near Great Hill in 1893. Link

A defended settlement of Iron Age date is sited on gently sloping ground just west of Houghton. The oval enclosure is over 100m wide. The ditch has become filled-in along most of its length, but can still be seen on the northern side. The remains of a stone and earth rampart can also be seen. Link 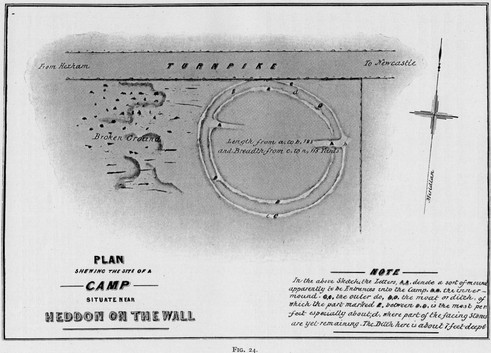 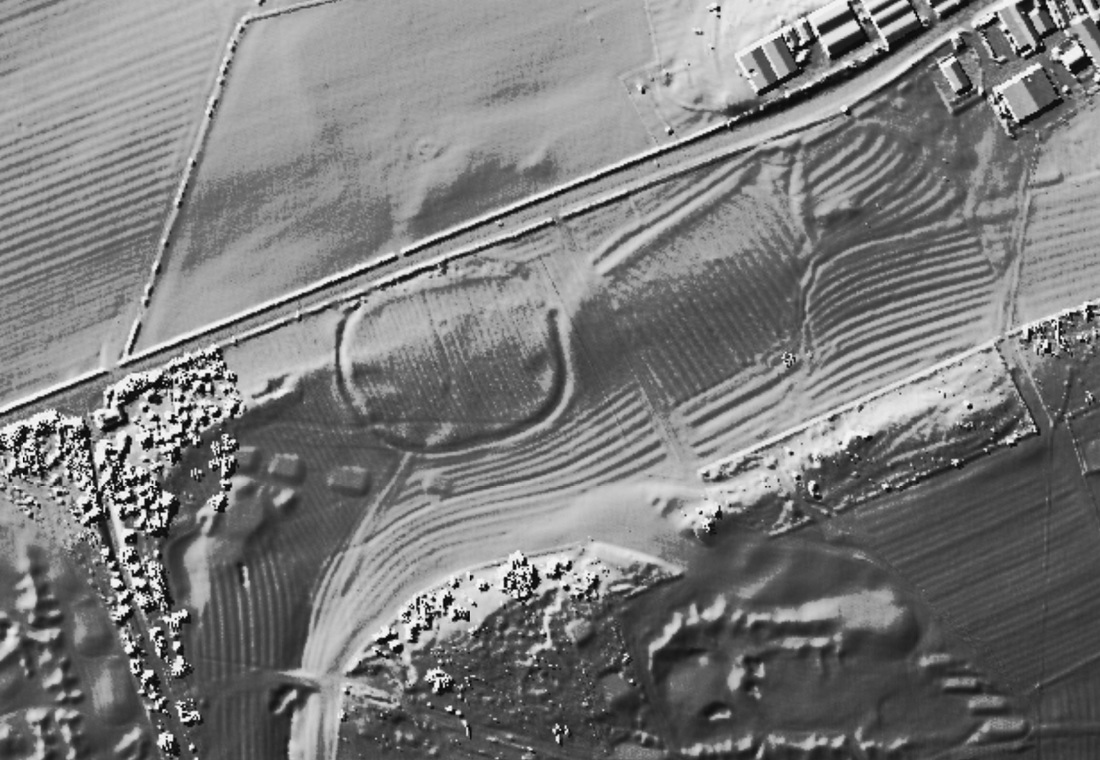 LIDAR image from 1m DSM data copyright Environment Agency.
Traces of hut circles were reportedly seen on Heddon Common and on the Resting Hill by CJ  Bates in 1880. Link

Heddon Common is now largely covered by disused quarries and part of the area, centred NZ 134 667, is now developed as a housing estate. If this report is true, this would indicate that the village was inhabited during this period. Link

Resting Hill is a field name shown on a 1780 plan on the steeply sloping hillside just south of Station Road below the village (NZ 137 665).

However, investigation of aerial photographs of Heddon Common taken in the 1930s before development, revealed two circular banked enclosures, 8 metres (NZ 1284 6680) and 5 metres (NZ 1286 6680) in diameter. These were interpreted as being likely post-medieval stack stands used for the storage of winter fodder. Link

A log-boat was discovered on the south side of the River Tyne, north-east of Clara Vale, after flooding in 1926: it was suggested to be Iron Age. Link
After the Tyne had been in flood and scoured the south bank near Ryton and Clara Vale in October 1926 a log-boat was found on a gravel layer beneath 16 feet of alluvial clay. It was flat-bottomed, had a bluntly pointed bow and a squared stern, and had been cut out of a single oak log. Its length was recorded as 9 feet 2in (2.75 m), its width 1 feet 10 in (63 cm), and draught originally 1 feet 6 in (46 cm) with 1 in (2.5 cm) thick sides. It was thought to be of Iron Age origin. 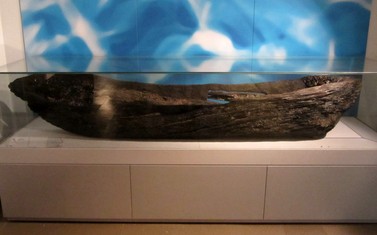