Tim Swann was appointed Cabinetmaker to Her Majesty the Queen in 1988.

His work was inspired by his admiration for Barnsley, Gimson and Russell. He fitted many of the most important of Britain's coin collections including the Fitzwilliam, Cambridge, the Barber Institute, Birmingham, and the Hunterian Museum, Glasgow. More importantly,  he supplied the Royal Mint with nearly 80 cabinets to house its complete coin collection.

His work for Elizabeth II began in 1975 when a complete reorganisation of the Royal coin collection at Windsor Castle was begun.The cabinets were created from specially purchased Honduras mahogany and Indian rosewood. On one occasion a log was delivered to his workshop addressed “Her Majesty the Queen of England, 3 Hexham Road, Heddon-on-the-Wall”.  Each specimen in the Royal Collection has its own rosewood holder, and the doors are faced with gilt-tooled leather book-backs, which blend seamlessly into the surrounding Royal Library
shelves.

He made the crosier and pectoral cross for his brother-in-law, Graham Leonard, Bishop of London (1981 to 1991) and later Roman Catholic  monsignor. His brother was Michael Swann (Baron Swann), former chairman of the BBC.

Text and photo (below) from Wikipedia. 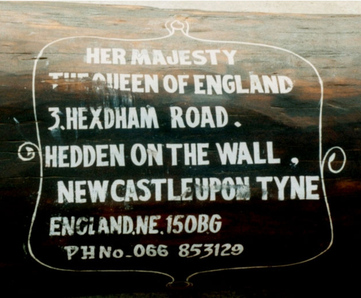 Indian rosewood log for the cabinet to hold the Royal coin collection. Photo by Hugh Swann.
He married  Patricia (Patsy) Fullerton in 1948 after his demobilisation from the army. His son told me that he was an officer in the Royal Signals and had spent some time in India, based in Jhansi, as part of preparations for the invasion of Burma that was rendered unnecessary after the Japanese surrender following Hiroshima and Nagasaki. "Later on he was in Singapore, and it was there, behind a cinema, that he met my mother for the first time."

He set up his first furniture workshop in Houghton School House at Heddon-on-the-Wall, the home of his in-laws, with the aid of a legacy from his grandmother and a Rural Industries grant,  His early clients were  among the churches of the North East, including the Holy Sepulchre, Ashington,  St Mary the Virgin, Ovingham, Holy Spirit, Denton, and the Church of  the Venerable Bede, Benwell. Other commissions came from Cambridge, including Clare College library.

In 1958, Tim Swann bought the west wing of the former vicarage in Heddon village, and built his second furniture workshop to a modern design by his friend, the notable Scottish architect, Peter Womersley.

The address, 3 Hexham Road was used to send the Indian rosewood log, shown in the photo above.

Swann cabinets, with his trade mark of a white swan on a black oval disc, were sold worldwide. He was very careful in his choice of well-seasoned wood, pale for preference. A hallmark was his drawer handle, a brass cylinder mounted end-out and waisted so as to welcome the fingers.
The stimulus that led to this article on Tim Swann is explained on the blog.