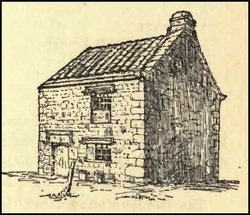 WEST HEDDON in 1628 belonged to Mr. John Read, gent., and in 1663 was the property of Mr. Richard Reed valued at £40. But 'John Carr of Eshet and Mrs. Dorothy Hunter of West Heddon were married by Mr. Rayne, March ye 29th, 1687' at Heddon Church. They had several children, and seem to have paid particular attention to the selection of godparents.[109] Mr. John Carr of West Heddon was buried in the church, 20th December, 1738. A marble tablet on the north wall of the chancel commemorates Robert Newton Lynn, Esq., who died at West Heddon in 1794. West Heddon afterwards became the property of the Misses Peareth of an old Newcastle family, who lived at Heddon House there,[110] and they left it to their niece, the late Mrs. George Burdon. To the north of the farmhouse at West Heddon, itself a curious old building, is what seems to be half of a manor-house of the Eeads, with a good doorway and Jacobean windows, now used as a cottage.[111] (See vignette, p. 269.)
109 'Thomas filius Johannis et Dorotheas Carr de West Heddon Gener : Baptizatus erat 22 die Mensis Septembris, 1692. Gulielmo Carr de Eshet Anniger, Martino ffenwick Gener: Domina ffenwick Susceptor.' The sponsors to their son Ralph, on 28th Dec., 1699, were ' Mr. Michael Mitford et Edward Collingwood et Domina Delavale.'
110 Burke's Landed Gentry, 6th ed., p. 1218. Their father, William Peareth of Usworth (1704-1775), was an Alderman of Newcastle for nearly half a century. It should be noticed, however, that the ancient arms of PENRITH, borne by Thomas Penrith, Sheriff of Newcastle, 1434 : Arg., three chevronels braced in base, ffu., on a chief az., a lion passant of the field, and (with the chief 0M.) by John Penrith, M.P., Mayor, 1458, do not correspond with the arms of PEARETH, Gu., a, chevron arg., 'between three pears or,'
111 The 'old Hall' is said to have stood to the east at right angles to this building, and to have faced the south. There are considerable traces of foundations. In the old 'stay-at-home' days, we frequently find a son, on his marriage, building a new house close to his father's.

At EAST HEDDON, the remains of the ancient residence of a branch of the Fenwick family have been turned into granaries, hen-houses,and cattle-sheds. At the east end of this range there is on the groundfloor a huge kitchen fire-place, and above it one with Tudor details. The windows exhibit delicate mouldings of a later date.

I give the pedigree of the Fenwicks of East Heddon, founded on the Heralds' Visitation A.D. 1615 and the Heddon Registers. It is evident there are great discrepancies in this pedigree, and it requires to be explained from title-deeds, wills, &c.

East Heddon afterwards came into the possession of the Corporation of Newcastle, and was by them sold to the Ridleys of Blagdon. 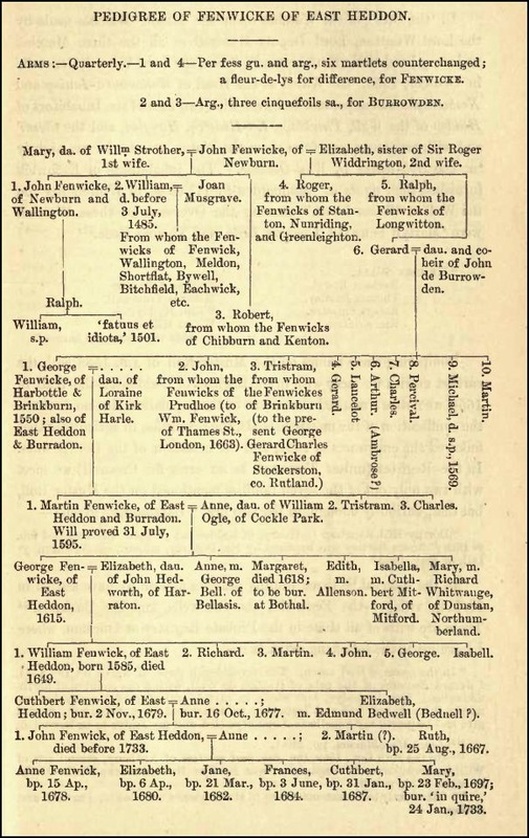 In ' the Order of the Watches upon the Middle Marches made by the Lord "Wharton, Lord Deputy Generall of all the three Marches under my Lord of Northumberland's Grace, the Lord Warden Generall,' in October, 1552, 'the Watch at the Head of Weltonburn -Inning and Nesbet-dyke was appointed to be set with two men of the Inhabitors of
Heddon of the Wall, Thorklaye, Est-Hedwen, Haugton, and the Close:' and with two more men from them the Watch was to be set nightly 'at the Holl- banks by West-Oustone' The inhabitants of Eachwick furnished their quota at ' Stannerden-ford;'  those of Whitchester 'on the Wall at Welton-burne' Among the Overseers of these Watches
were 'Martyn Fenwyke, Clement Rede, and Thomas Eede.[112]

Comparing these names on the Muster Roll of A.D. 1538 with the earliest entries we meet with in the Register of Heddon-on-the-Wall, in 1656, we notice a marked movement of the population, due no doubt to the confiscation of the monastic lands, the revolution in agriculture that followed the enclosures of 1554, and the cessation of the Border wars. In the Register (unless Trumwell be an error for Creswell) we meet with two only out of the seven families mentioned on the Muster Roll, but that, curiously enough, in the two first "Baptissings" given:

In the interval,[113] three leading families appear to have settled in Heddon village the Fenwicks, the Creswells, and the Barkases.[114] There are wills of all these in the Probate Registry at Durham, where I have made the following extracts:

" In the name of God amen. The seventeenth daye of March Ao. Dni.1584, I Jerard ffenwick of the pshe of Heddon de Wall, within the countye of northumberland, Sick in bodye, but whole in mynd, and of perfitt remembrance, mayke this my last will and Testament in maner and fform ffolowing : ffirst I give and bequeath my Souelle to Almightye God and my bodye to be buryed in Heddon Church. Itm, I give to John ffenwick, of Barwick, my brother, my Two Tenements, lying and being in Ovington.[115] to occupie and enjoye unto such tyme as marmaduke ffenwicke, Sonne unto my brother, Martyne ffenwick, come of lawful age, at which tyme my will is that my Sayd brother John shall deliver them to the sayd marmaduke, provided that in the meane tyme my sayd brother John shall fine them in his owne name. Also, I give unto my sayd brother John Eight oxen to be delivered to the sayd marmaduke at such tyme as he shall come of Lawfull age, and my sayd Brother John to bring uppe the sayd marmaduke with meat, drink, and cloth, and to keppe him at the scoole all the sayd tyme." Then after providing that if Marmaduke Fenwick died under age, the Tenements were to pass to the heirs male of John, with remainders in default first to the heirs male of his brother Ambrose Fenwick, and then to the heirs male of Martin Fenwick, he proceeds "And whereas the Tennants dwelling uppon the Two Tenements haith but now remayning ffoure years, if my brother John and they doe not agre, so that they depart from them, my will is yt. my executors give unto them the Somme of six pounds, Thirteen shillings, and fourepence, to be equallye divided between them." Among the legacies are: "To Martyn ffenwick all the cattle of mine about his house, * * * * also, 10 bolls of rye in Longwitton this year, and 10 bolls next year, * * * To Raiph Peareth 2 bolls of rye. To George Shafto 2 kine and one quey, with their calves, that is with Nicholas Clarke, and 12 sheep with John Carnaby, of Langlye. To the poor of Heddon parish 4 bolls of rye. * * * To Anne Read 10s. * * * To Matthew Soppett's wife 1 boll of rye. To George Raymes, 1
bushell of rye. To Gerard Sanderson, one of my best Lambes, and if he dye to be delivered to his father. * * * To James Hobson 1 boll of rye."

The inventory attached to Gerard Fenwick's will is curious : 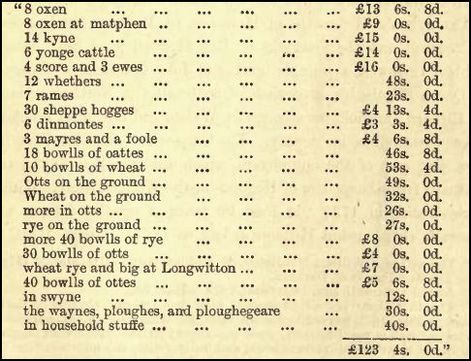 But the most extraordinary thing is the list of moneys, in all £82 15s. Od. lent out by Gerard Fenwick to nearly a hundred different neighbours. We should now consider him a sort of country banker, but in these days he was no doubt regarded as an usurer. The notices of the cattle at Matfen, the sheep at Langley, and the corn at Longwitton,
show how wide the ramifications of farming were in those days, owing to a complicated system of land tenure.

Ann Barkas by her will, A.D. 1585, desired to be buried in Heddon Churchyard. She left her property among her children, George Barkas, Jeffrey Barkas, Anne Barkas, and Elizabeth Grenooe, and appointed as their respective guardians, her brother William Mydleton,[116] her brother-in-law Symon Ladleye, William Hill, and Elizabeth Grenooe's father (sic) Steven Grenooe. The witnesses were William Mydelton, Symond Ladleye, Steven Grenooe, Edward Stocco, and James Hobson. The inventory was taken by Edward Cresswell, Edward Stoccoe, Matthew Foster, and Jeffrey Barkas.

The will of Anne Cresswell of Heddon-on-the-Wall, 2 March, 1614, directs her body to be buried in Heddon Church, and mentions her sons Anthony, Clement, and Arthur,[117] her daughter Margaret Barkas, Isabell [118] her son's wife, William Barkas, her son Clement's daughter Mabell Barkas, and her son Arthur's daughter Mabell.[119]

Through the Hedworths of Harraton, co. Durham, the Cresswells of Cresswell and the Fenwicks of East Heddon were near cousins.Cuthbert Cresswell, a younger brother of John Cresswell of Cresswell, was Queen Elizabeth's supervisor of coal-mines in Northumberland; and Richard Fenwick, her receiver for Wylam and Ellington, employed Robert Cresswell as his deputy. The Cresswells at Heddon lived in a house just east of the churchyard, which was rebuilt in 1821 ; they eventually farmed a quarter of Heddon-on-the-Wall township. William Cresswell died in 1730 "at least 90 years of age," and there were Cresswells christened at Heddon as late as 1771. About 1780, the family are said to have ruined themselves by horse-racing, and their farm was let to Matthew Robson from North Tyne.[120] It is curious to see how the cadets of ancient houses stayed on at home in their own
county, descending from knights and squires to yeomen, and, probably, at last to mere labourers.

At one time in South Northumberland, if a man's name was not Ogle, the heavy odds were that it was Fenwick. According to the Heralds' Visitations, Lancelot Fenwick of East Heddon, A.D. 1538, would appear to have been the fifth son of Gerard, the sixth son of John Fenwick, who married the heiress of Wallington. Lancelot had five brothers still younger. Nor was this prolific increase confined to this one branch of the race, so probably there was no exaggeration in the old ballad:

It would be difficult to deny that any Fenwick in particular at the present day is not a descendant of so numerous a clan. I have been at some trouble in arranging the various families of Fenwicks entered in the Heddon registers in genealogical tables, which, however, must only be regarded as hypothetically correct. The first entry relating to the
main line at East Heddon, is the notice of the burial of Anne, wife of Cuthbert Fenwick, on 16 Oct., 1677 ; the last, that of the burial of their granddaughter, Mary Fenwick, "in the quire," 24 Jan., 1733. As regards the families in Heddon village, both Thomas Fenwick whodied in 1691, and Martin Fenwick, Lord Carlisle's bailiff, who died in
1709, appear to have been thrice married ; the latter had twenty grandchildren. That all these families were branches of the East Heddon family is, I take it, sufficiently proved by their having been buried with them ' in the quire;' only a William Fenwick of West Heddon was buried outside in the churchyard on 17 Feb., 1711. Additional evidence of consanguinity is afforded by the fact of Mr.Martin Fenwick of East Heddon having stood godfather to Martin, the sixth son of Bailiff Martin, on 28 May, 1700. 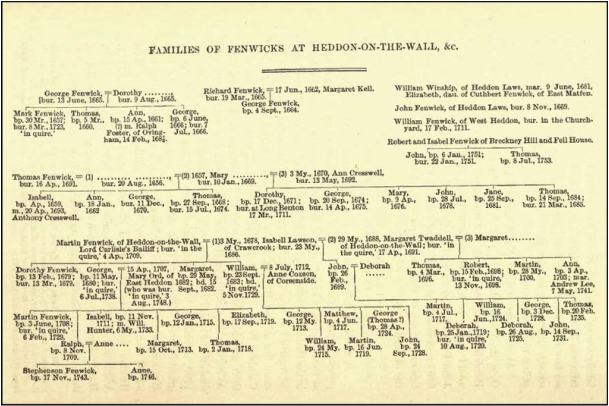