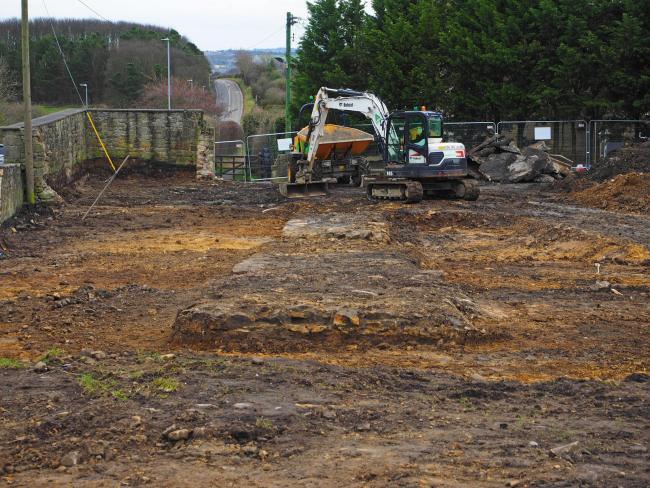 Builders discovered a section of the Wall buried underneath the site while excavating for a new housing development located within the ancient monument’s World Heritage Site.

The proposal for five new homes in the village at Tulips Yard was approved in November last year, and involved the demolition of the remaining 19th century stone buildings on the site.

The discovery came as a surprise to Northumberland County Council and Historic England archaeologists after an inspection report, conducted for a planning application at Tulips Yard in 2015, said no remains of significance were recorded.

A Historic England spokesperson said: “A programme of archaeological trial trenching took place before any permissions were given and the results suggested that it was unlikely that significant archaeological remains survived on the site.

“The news of the discovery is a rare and exciting opportunity for archaeologists to study these remains, and compare them with the current English Heritage site to the east.

“In any building site, but more so especially this one, there was always the possibility that unexpected archaeological remains could still be revealed.

“For this reason the county archaeologist and Historic England advised a need for an archaeologist to monitor the development works to allow any discoveries to be addressed.

“This monitoring was what led to the discovery of the remains of the foundation of part of Hadrian’s Wall.
“Further excavation and analysis will now take place and the site recorded.”

Karen Derham, Northumberland County Council assistant county archaeologist, said: “It’s incredibly rare that ancient monuments are found when digging on a site such as this one.

“When something like this is discovered, building work stops immediately, the relevant officers are informed and preservation work is carried out to protect or remove the remains.”

The remains of the wall have since been excavated by Historic England, and will be preserved for archaeological record.

Karen added: “Because of the impact the building work could have on the Wall remains, it was decided it was better to excavate them and get a full record instead of keeping them on site.”

Further archaeological excavation work is currently ongoing to deal with any remnants of the Wall that still remain on the site before the next stage in the building work can take place.

Local photographers and historians flocked to the ‘Hidden Northumberland’ Facebook page to share their photos of the rare find.

The discovery sheds further light on the Wall’s path through the village with the Tulips Yard building site close to a currently preserved area of the ancient site on Towne Gate.