Whitchester township
from an article by George Clark

Whitchester appears to have been a much more important place in the past than we now can imagine. Before Rudchester was united with the Heddon parish (formerly it was in Ovingham parish and transferred in 1892), Whitchester was only joined to the rest of the parish by a narrow strip of land on its east side where there is a cairn and a farm house called Turpin's Hill (Hall), deriving its name from the family of Turpin who long held Whitchester. The 'chester' in the name of the township was an earthwork now obliterated by ploughing about a quarter of a mile to the north of the Roman Wall.

Whitchester was held by the Craudens from the Bolbec barony, but there was however, early in the 13th century a family bearing the local name, 'Wytchester' or 'Whichestre'.

A law suit began in 1242 and lasted for nearly a century between Sibil, heiress of the Craudens, and her heirs, the Turpins, against Robert of Whitchester and his heirs, the Reads of Close House, over the ownership of the township. During the long feud that resulted, Martin Turpin killed John Rutherford of Rudchester in 1545. The Rutherfords took the Read's side in the feud. A pardon was granted to Martin Turpin on 20 March 1645.

Upon the failure of male heirs of the Turpins, Whitchester passed in 1583 into the hands of Nicholas Howburn whose mother was Isobel, daughter of Nicholas Turpin. In 1607, Thomas Howburn sold the Manor of Whitchester to Sir William Fenwick. His son later sold it to Ralph Read. In 1656, the property was conveyed to Sir Thomas Widdrington from whom it passed by the marriage of his daughter Ursula to the family of Lord Windsor.

After many more transactions, Ralph Riddell of Cheeseburn Grange purchased part of the estate in 1824 and another part in 1842. From him, Loudside descended to Mr Riddell Blount and is now owned by Major P Riddell and farmed by A.E. Thompson. Another part of Whitchester belonged in 1825 to Mr Thompson and was bought from him was bought by the Johnsons. Spearman Johnson was owner in 1841, William Lee Johnson in 1894. It was later purchased by William Hall who died in 1925 leaving it to Mr R Hall.

High Seat, that part of Whitchester south of the Military Road was bought early in the 19th century by Mr Dobson of Harlow and is described in the 1828 Directory as:
John Dobson, Victualler, Crown & Thistle, High Seat, Whitchester.
It is now the residence of Colonel L.Y. Gibson.

Near a cairn on the farm of Turpin's Hill, now owned by J.B. Spearman, a stone chest was found in 1771. It contained nothing more than a quantity of ashes and burnt bones. In 1795 another of these chests was found in the same cairn which contained two urns and copper coins of Domitian, Antonius Pius and Faustina; they were lodged at Eachwick but their current whereabouts are unknown.

Iron Sign, now in the possession of G. Noble, was an old inn and a halting station for stage coaches. In 1851 we read:
William Hind, Victualler, Ironside Inn, Whitchester.
These stage coaches, endowed with patriotic names, passed through Heddon parish in their journeyings. The 'True Britain' started out at 7am from Newcastle in its journey to Carlisle, the Mail Coach at 7:30am, both returning the following day.The 'British Queen' coach plied daily between Hexham and Newcastle and the numerous carts carrying ore from the lead mines were a familiar sight, 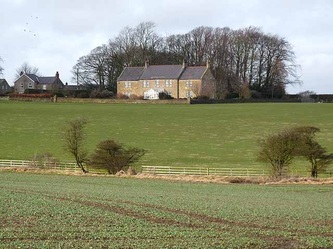 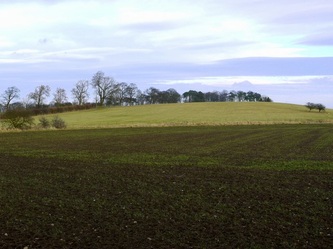 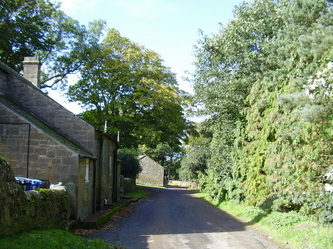 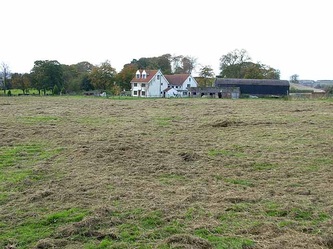 Archaeological Research Services Archaeological Evaluation at Iron Side Farm (2007)
Iron Sign is not shown on Armstrong’s 1769 map of Northumberland but is clearly visible on Fryer’s 1820 map of Northumberland. The first edition Ordnance Survey Map of 1860 shows Iron Sign as a public house named ‘The Crown and Thistle’. The name Iron Sign does not appear again until the second edition Ordnance Survey Map of 1897.
A correspondent told me (2011) that a certain Thomas Burn is recorded in the 1841 census as a publican (Crown & Thistle Inn), and again in 1851 as Innkeeper. John Burn (died 1892) and his mother Ann (died 1861), who have a gravestone in St Andrew's churchyard [83],  were members of his family , John being his brother and Ann their mother.  They are all listed in the 1841 census as living at 'C & Thistle, Whitchester'.  Thomas is listed as the publican,  who is married with three children; his brother, John, a joiner, and mother, Ann, listed as 'Ind', presumably denoting independent means. They are all listed again in the 1851 census as living at Iron Sign,  Thomas Burn, the publican, living with his wife Ann, his brother John, and mother, Ann.