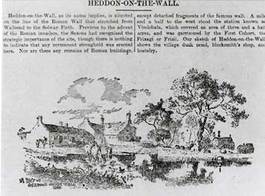 The main business was farming, some other occupations were:- grocers, blacksmiths, boot and shoe-makers and repairers, and tailors.

_Farmers during the 1800s were Frederick Freeman, John Armstrong, John Atkinson Armstrong [133] and William Armstrong who all farmed at Bays Leap between 1828 and 1886. Henry Armitage was at Birks East Farm, John Laws at Brecon Hill Farm, Jonathon Laws [90] at East Heddon Farm, and Mary Laws [90] at Heddon Laws Farm.

_In 1894 Elizabeth Sarah Wilkinson was the only female to be elected to serve on the first Parish Council together with six men from the village. Daniel Carberry was elected chairman at this meeting.

Unfortunately the directories do not give any indication where the shops were as most of them were in peoples houses. The only ones known today are a sweet shop on Mushroom Row run by Mrs Graham, and Mr Tully sold papers from a house also on Mushroom Row. Bread and teacakes were sold by Mrs Charlton from her house on Station Road and her son also had a van and delivered bread and sweets around Heddon, East Towne Farm and 'Waughs' on Hexham Road, and a Post Office on Clayton Terrace. Mrs Eddy was also known to sell small amounts of necessary goods such as black lead and butter from her house in the Square Yard, one of the Wilkinson family sold sweets from her house at Houghton and Wilkinsons also had East Town Farm.

After Mr Waugh died the family moved to Haddocks Hole (beside Three Tuns) and Mrs Waugh used to sell lemonade from a window facing on to Military Road to any cyclists or walkers travelling that way. They eventually bought the house on Hexham Road which is now known as the Old Post Office and ran the business of post office and general dealers from there.

The people who lived in Garden House used to sell some of their spare produce to villagers. It was possible to buy 2d of 'potstuff' from them and also a bag of apples or pears for 1d. The horse and cart was used to collect and deliver orders from Throckley Co-op and also a cart came from Wylam Mill to collect orders for flour. Hannah Gibson used to be the carter from Heddon (Carters Cottages?) taking goods from Heddon to Newcastle with her horse and cart and bringing back any packages to be collected from her house by the residents of the village. She lived in the cottages beside the Swan. Another person popular with the men was the bookie. This was in the Square Yard then Hexham Road. All was done on the quiet but everyone knew about it.

_TAILORS are listed as John Falkes and John Falkous as well as Matthew Hunter, William Charlton and William Howden. Slight changes in spelling surnames make it difficult to be certain that you are tracing the same family.

_STONEMASONS are listed as George Hunter, George Lawson, William Johnson, Stephen Lawson, and Robert Hunter, and in 1881 William Jackson is listed as Stonemason and Grocer.

_One of the constant occupations in Heddon from early times was the Vicar.


Their ministry in Heddon lasted from 1 year to 34 years during this time.

_At the entrance to St. Andrew's Church is a stone seat on each side of the porch, this represents the first seat of learning in the parish where in medieval times those who were willing and able to afford it, would come for instruction from the priest or monks in charge of the church. The earliest mention in records of a schoolmaster in Heddon was Walter Salvin in 1656. In 1823 Mrs Bewicke opened a school at Houghton for the children of Close House and Houghton. In 1828 Charles Watson was the schoolmaster there. There are records of the academy in Houghton in 1834 run by John Young and also at Heddon by Jane Hogg.

JOINERS were  John Burn [83] and John Robson [114], Mr Duke who was Turkish and lived on Hexham Road next to the vicarage, and there is also, at a later date, Tulip and Murray.