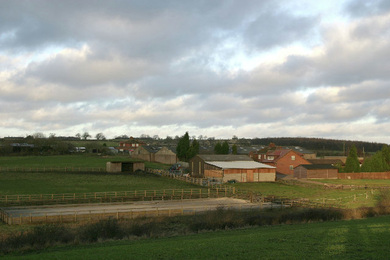 Burnside Farm, Heddon on the Wall


Heddon on the Wall was dragged into the national limelight in February 2001, when an outbreak of Foot and Mouth disease was discovered at an Essex abattoir. The source of the disease was quickly traced back to a pig unit located near to Burnside Farm, Heddon on the Wall.

The pig unit on the East Heddon smallholdings, just north of the A69 dual carriageway, was leased by two brothers, who lived in Sunderland and not connected to Burnside Farm itself. Their entire herd of pigs, plus the pigs and cattle of the next door farm, were slaughtered and burnt.

The source of the outbreak seemed likely to be infected meat which was imported into the country, and had been fed in the pig swill.

The disease quickly spread to other parts of the country, due to the delay in recognising the initial presence of the disease, and the fact that livestock from the infected area had been sent to local markets, and from there dispatched on to other markets and farms around the country.

At least ten other farms in the immediate locality were infected, and all their stock was slaughtered. This localised infection was thought to have spread by a variety of means including aerial.

This outbreak had several effects on the village. There was an initial influx of the media, in the form of vehicles with large satellite dishes attached. There was a marked drop in trade for local businesses, as people kept away from the area. Many minor roads were closed and people had to modify their walks. Away from Heddon, on meeting people who found out that you were from the Heddon area, you were sometimes treated with suspicion.

Areas of the UK that were particularly badly effected by the outbreak were Cumbria, Devon, Dumfries and also the Tow Law area of Durham and the Settle area of North Yorkshire.

In some respects Heddon was fortunate in that as the outbreak spread the Government were forced to bring in the Army to help organise the mass cull of over 3 million animals. The main control policy was to slaughter all animals within a 3 kilometer radius of any outbreak or any farms where contact could be traced. As this policy was not in place initially most of the farms in the area were not affected and stock was soon visible in fields again, whereas in other areas that were affected later the mass slaughter policy left the countryside completely devastated.

The Independent - This Britain