MEMORIES OF JACK LAWSON, Oct 2001
from an article by Pat Farnaby

The photo (below) shows Jim and Alec Riddell with their father, George Riddell's, horse and milk float,  delivering milk to the Frenchman's Row and Throckley in 1907. (their ages were 16 & 14 approx).

The milk was ladled out of the churns and poured into the customers' clean jugs.

Jack can also recall that he also used to deliver the milk when he was a lad. He remembers having to take the horse and cart to Heddon, to Mr Jackson the Cartwright who had his yard opposite Armitage's Smithy. There Mr Jackson used to fit new wheels or respoke them. Jack would then take the cart to Charlton Amos's to have the metal rims fitted.

One day when Jack was delivering milk, he was asked by a Mr Atkinson if he would clean up his allotment for him. Left in the allotment were quite a lot of cabbage; so he cut and dressed them and then sold them the next day whilst on the milk round. A few days later Mr Atkinson stopped Jack in the middle of the round and "played war" (Told him off). Jack thought at first that he wasn't pleased with the job he'd done on his garden. "It's not that" said Mr Atkinson "You sold my wife one of my own cabbages!"

Playing under the street Gaslights at night time was the favourite place for all the kids.They used to collect a bundle of old newspapers and tie it into a ball with string, to play football. Hard up days EH?

Jack also remembers the 'Flying Tailor' who was knocked off his bike and killed, when he was in Woodside Avenue, Throckley. Some other tradesmen he remembers, who delivered by horse and cart, by bicycle, or on foot were:-

He was another farmer called Bob Bell of Woodside Farm Heddon, who also had 3 heavy horses and carts. As a boy Jack used to watch out for the coals being delivered by him so he could volunteer to put the coal into their coal houses. Jack and his pal got paid threepence each per load. The coal was a free perk for miners who worked at the colliery.

His cry was - "Sandy stone, Sandy stone"! (This was used to greystone the door step after it had been scrubbed)  "Get your mothers' old stocking legs  - - and I'll give you a cock-eyed goldfish!"

He also sharpened saws and scissors. He had a bike with a special wheel on the back and when he pedalled this turned his grindstone. Jack's mother used to supply him with cleans rags 'cos he was always cutting himself.

His name was Mr Keenan and he went around on his bike to light the street gas lamps. Jack would imagine that he also put them out when it was daylight again, but, personally never saw him do that......

This person was usually a retired miner who used a long pole to knock on the pitmens' windows to make sure they weren't late for their shift down the coal mine.


Other Tradesmen that Jack remembers

Bookies Runner
Chimney Sweep
French Onion Man
Tally Man (He sold goods out of his suitcase and the customer could pay by instalments).
Insurance Man
Gypsies selling clothes pegs and Telling Fortunes
Club Man for the Co-op
Provident Man
Boy on the Butcher's Bike
and as today, of course - the Newspaper Boy. 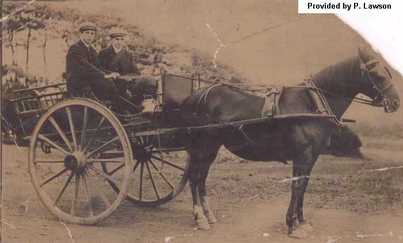