The day of the old Village Feast or Picnic is now forgotten and with it also has gone Heddon Hoppings which was held on the Monday of the first whole week after the Midsummer Fair at Stagshawbank. Newburn Hoppings came a week after heddon, Lemmington the week following and so the showmen made their way to the Lammas Fair (August 1st harvest festival) on Newcastle Town Moor.

This festival was much looked forward to by the inhabitants as was the election of 'Lord Mayor' of Heddon. Many older residents of the village recall memories of the last of these 'Mayors', a quaint and eccentric person by the name of Harry Pierce, popularly known as 'Harry the Mayor'. For the election ceremony, the Mayor was mounted on a donkey, invested with his insignia of office (an old lamp chain) and was paraded with great pomp and pride around the Towne Gate. Needless to say, much imbibing was indulged in at Mine Hosts, the Mayor not minding the locals having their fun at his expense as long as he became as much inebriated at theirs.

Depositions and other ecclesiastical proceedings from the courts of Durham (1574) ref. 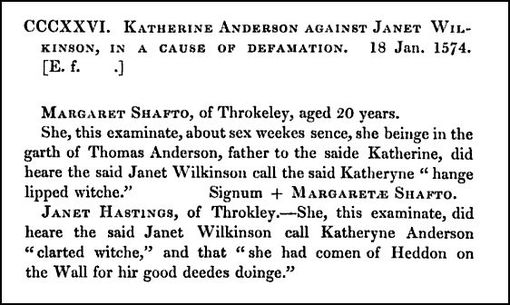