Heddon on the Wall in prehistoric times

Stone Axes from Heddon on the Wall

As already reported in Archaeological Newsbulletin No.3. September, 1968, three stone axes were found by Mr. C. Munro of 44 Antonine Walk, Heddon on the Wall in the back garden of his house on the new Vallum Estate on the East Side of the village of Heddon on the Wall (Map Ref. 78/135 668) and about 200 yards south of the well-known stretch of Hadrian’s Wall.

The site is on the North Bank of the Tyne, on possibly the highest terrace above the river, though the point is debatable since the builders used a bulldozer to level out the ground, which is now stepped down from West to East. Hence the floor of the neighbouring garage is three feet higher than Mr. Munro’s patio - an area paved with concrete slabs, the laying of which led to the discovery of the axes.

Mr. C. B. Burgess and I decided to remove the slabs and explore the site beneath, primarily to see if the area should be more fully excavated at a later period. This trial examination led to the discovery of one more axe, parts of two more and a possible 'rough out' of a fourth. The material is a fine grained, light green igneous rock, whose likely origin is the Lake District. It has not been possible to ascertain this for certain since it is understood that an advertisement in the Observer may have led to the sale of these axes. Hence, this matter is recorded now with the hope that the present owner will come forward and allow one of these axes to be examined petrologically, and so that future archaeologists may not be misled, if these axes should reappear in a 'foreign' context. 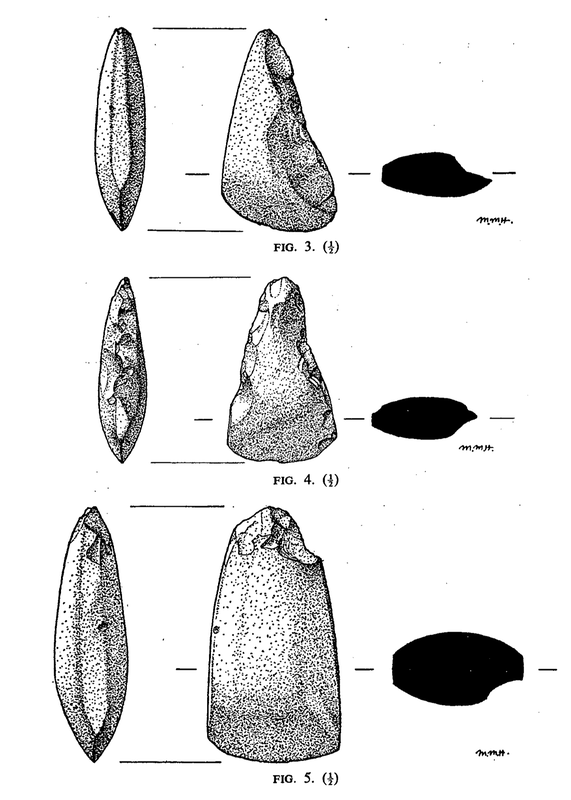 The New Finds (figs. 6, 7 and 8)
It is regretted that the drawings of these are incomplete since they were removed from Miss Hurrell's custody unex­pectedly early. The following details must suffice. The material was the same fine grained, light green igneous rock.

The first axe was more curvilinear in shape than the others. Its maximum height was 3.7 ins; its maximum width at the apex was 1 1/2 ins increasing to 2.9 ins along the cutting edge. Its maximum thickness was 1 1/4 ins.

The second piece was probably an axe fragment, but another kind of tool ought not to be excluded. It was fractured top and bottom and had a minimum width of 1 1/5 ins increasing to 1.9 ins. The height of the fragment was 2 ins and its maximum thickness about an inch.

The third stone was more roughly hewn, perhaps unfinished or damaged, but it should be classified, pro tem,as an axe head. Its maximum height with 3.4 ins; its maximum width tapering from 1 3/4 ins. to 0.9 in along thedamaged cutting edge. In thickness it was not as homo­geneous as the rest of the group.

The fourth stone is probably only a stone but could be classified as 'raw material'. It could even be incidental in the context but its proximity to the other stone axes should not be disregarded. In shape, it was inclined to be more curvilinear. Its maximum height was 3.2 ins and its width was 0.7 ins increasing to a maximum of 1.8 ins. Its thickness was not recorded. 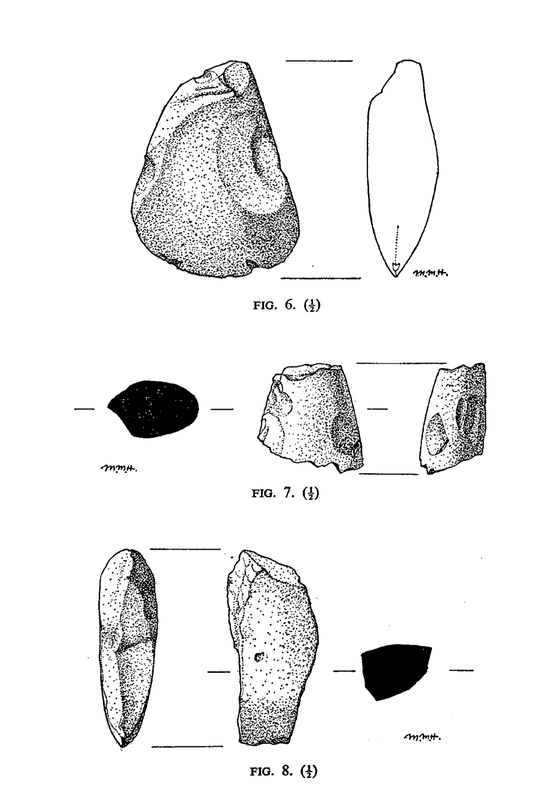 Further Comment
The site is an important one which ought to be excavated at some future date. I am told by Mr. Burgess that this find is remarkable since it contained the greatest number of stone axes ever found together in this country.
Reference:
Stone Axes from Heddon on the Wall. E. W. Sockett (1971). Archaeologia Aeliana Series 4, vol.49, p.241-244.