Water supplies
based on articles by Pat Farnaby and George Clark

Heddon's water supply in former years was mainly drawn from wells, of which there were quite a number dotted around the village. Some have now been filled in and other are just covered over with large freestone slabs. Many of the wells were in use until quite recently. The ancient, Chare Well, was situated at the foot of Chare Bank, opposite the east end entrance to the Memorial Park. Several of the wells were fitted with hand pumps such as those at the rear of Carter's Cottages and in Kennel Yard.

A spring also flowed out on the north side of the Common, on the edge of the Hexham road and in use at times as a water supply.

The house to the right of the entrance to the church, Church House, had a well situated inside the house. This was eventually condemned when it was realised that the water was first passing through the churchyard behind the house.

In the middle of the 1800s, a water tank was sunk into the solid rock and housed in a stone building, on the site of the 12th milecastle, near Towne Farm yard. This tank then fed a series of communal taps around the village.

The tank was fed from the Seven Springs, that rise in a deep ravine on the west side of the East Heddon estate, by a pump and pipes installed in the Mill House (commonly known as 'Jacky the Mill'), which was situated on the left side of the A69 duel-carriageway, as you travel east, just after the point where the slip road joins the by-pass. The old Mill House was demolished in open-cast mining operations. The springs have never been known to fail.
Tank House was eventually replaced by a raised metal water tank which provided greater water pressure. The photo below on the right shows Mushroom Row cottages, and on the skyline in the centre of the picture, you can just make out the outline of the water storage tank, on the top of the hill.

The storage tank had a float inside, which was attached to a long pole with a flag on top, this enabled the level of the water in the tank to be clearly visible from a distance. You can just make out the flag, above the water tank.

The task of ensuring that the water tank remained at a reasonable level belonged to a council employee, who living in the first cottage on the right as you travel up to East Heddon, as he was very close to the brick building which housed the pump and engine. He reputedly used a pair of binoculars to check the height of the flag, morning and night, and started or stopped the engine accordingly.

The stone building which housed the first water tank has now gone and in its place a new house has been constructed, aptly named, 'Tank House'. 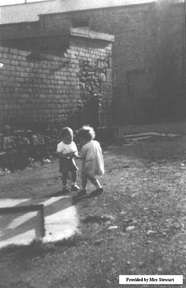 Photo courtesy of Mrs Stewart
After the water tank was installed, the supply to the village consisted of five stand-pipes, where people collected their water in pails, often two at a time on either side of a 'water-square' to prevent splashing. They were at:

The photo shows the 'Square Yard' (circa 1954/55), a group of buildings on the south side of Towne Gate now occupied by the Old Library (Men's Institute). In the background you can see one of the five communal taps in the village. After many years of use, the pipes became furred up and the pump often broke down leaving the village without water for three or four days. Recourse then had to be the old springs, or a walk to Houghton well, carrying the water back approximately half a mile.


A few new houses were now being built in the village with a bathroom but could not be used as such as flush toilets and a hot water system heated from the fire was not suited to the erratic water supply.

This lack of reliability of supply was referred to in the minutes of a meeting of the Parish Council held on the 10th November, 1930, when Mr. Anderson drew attention to the water supply at the tap near the Square Yard stating that it took over an hour to get a pailful. It was proposed that Mr. Hedley be written to by the Clerk drawing his attention to the inadequate supply at the tap and asking him to give it his attention as soon as possible.

Again, at another meeting on the 13 April 1931, Mr. Hunter asked if anything could be done to get a better supply of water for the Parish. After considerable discussion it was decided that Mr. Taylor would interview Mr. Horton, Newcastle Water Works, as to terms for supplying the Parish. The Clerk to ask Mr. Jameson, Sanitary Inspector Rural District Council to attend the next meeting.

Eventually in 1934, after the old pump and tank had done service for more than eighty years, the Rural District Council took steps to remedy the situation by obtaining a loan from the Ministry of Health and installing a new pump and house about 400 yards west of the old one to tap the same supply. A pipe was laid to a new iron tank, just outside the east side of the churchyard at the top of Mushroom Row. This was a structure on stilts visible in some old photographs. Mushroom Row is now demolished and the new Library and Amos Brothers' Forge lie in its place. The concrete foundations for the  legs of the water tank can still be found in the grass on the mound behind the Library, adjacent to the churchyard wall.

A new three inch mains pipe was also laid around the village and many owner occupiers now linked up with the new supply although occupiers of the colliery-owned houses in Blue Row and Clayton Terrace still had to carry their water from stand-pipes on the wells. In one cold winter, the tank froze up and an emergency water cart had to be brought around the village.

Around 1954, the supply of water was taken over by the Newcastle and Gateshead Water Company and water was then piped directly in from the Whittle Dene reservoir, to feed the village mains. The spring supply ceased to be used.

The East Heddon estate was served by a tank and pump house on Heddon Law drawing a supply from boreholes, but was also served by the Newcastle and Gateshead Water Company from July 1963.
Photos above © Copyright Andrew Curtis and licensed for reuse under this Creative Commons Licence

Before there was a running water supply and indoor flushing toilets, the situation in Heddon was the same as that in other parts of the country. A dry earth closet was available to most houses, frequently shared, and usually situated in a garden or yard near the house. These closets were emptied from time to time by men employed by the Local Authority. This was itself an improvement over the previous middens, which were the source of many outbreaks of disease. Before any new development in housing could take place in the village, it was essential that new sewerage works should be undertaken.

As a matter of interest, there is a record in the church registers of a serious outbreak of Typhoid Fever in Heddon in 1878 which resulted in the deaths of 10 residents. The church magazine of November 1901 records:

'I am very sorry to state that the young deaths recorded above are due to diphtheria. The numerous cases of this dangerous disease recently compelled the Managers acting on the recommendations of the medical Officer of Health to close the school. I had fondly hoped that by this time, the new drainage scheme for Heddon would have been well forward, but it is not even begun, and does not seem likely to be."

No record exists of whether the drainage scheme of 1901 was ever undertaken until recent years when the present works were constructed by Messrs. Bailey & Co. of South Shields in 1953-54. So controversial were the points at issue concerning the sewerage works at that time, and the siting of the council and village housing estates, both proposed to be on the Crag Field, that a public inquiry was called and held in Heddon. The building of the council estate commenced on 1st January 1954. Previous new building took place during the 1920s on the Military Road, 1930 onwards on Hexham Road, most of Station Road 1929-32, and Hedon Banks in 1936.

Another modern-day improvement to the village was the installation of street lighting. Those familiar with the 'black-out' during the 1939-45 World War can readily remember what it was like to be obliged to walk the streets in complete darkness. The Parish Council held meetings to discover the views of residents and needless to say there were a number of folk who wanted nothing to do with this new-fangled lighting. fearing a rise in the rates. However, a majority decided in favour, so in 1932 it was agreed with the North Eastern Electricity Board that street lamps would be erected to provide a public street lighting service. Overhead cables were erected around the village and some houses were connected and could be wired up for a charge. In 1933, street gas lamps were installed between Frenchman's Row and Bay's Leap view. These have now been replaced by electric lighting.