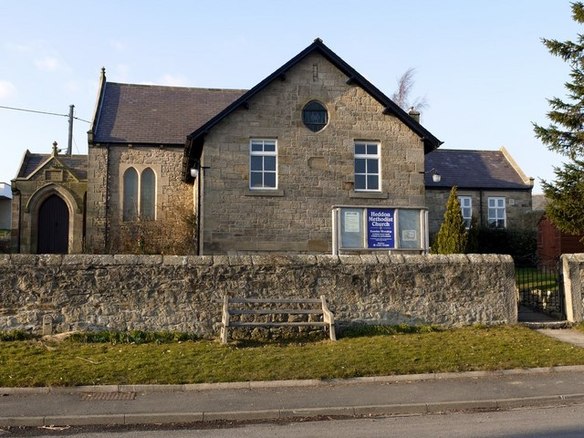 Around 1860 a series of revivalist meeting were at two cottages in the village, organised by the Heddon Methodist Society. At these meetings, a number of men who were mainly officials at the Heddon Pit, were converted. One of these was John Snowden, who was employed as a Brakesman on the Colliery Winding Engine,  and lived in Heddon Square, where most of his 16 children were born.

In  1873, new developments at the colliery belonging to Mr Thomas Bates necessitated the building of several additional houses at Heddon. This gave an impetus to the religious life of the village and a society class was formed by Rev. James Clapham, one of the circuit ministers stationed at Lemington.

Services were held every Sunday night in a cottage occupied by Mr Guy Murray. Eventually the meetings in cottages became too cramped and this led to the building of the Chapel in 1877. John Snowden being one of the instigators of this development.

Assistance towards the cost (around £450) of building the Chapel were received from Mr. William Stephenson of Throckley House (father of Sir William H. Stephenson), Mr. Thomas Bates of Heddon Hall, and Mr. John Clayton of Chesters.

One of the pioneers of the Methodist movement in Heddon was Thomas Henry (Harry) Jackson. He was born on 4 June 1858 in St John's Lane, Newcastle where his grand-father was an architect associated with Richard Grainger. His parents died while he was quite young and had to enter the workhouse where he worked in the bakery. At age 10 he escaped and secured work as a putter (a person who brings the full tubs from the hewer to the flat and takes him the empty ones) at Coronation Pit in North Walbottle, where he also attended the Wesleyan Chapel. Coronation Pit closed in 1873, and Harry moved to Wylam, working there as a putter  for a year, before securing work as a hewer (a man who cuts coal, removing it from the coal face) at Heddon where he lived (before he married) with Guy Murray.

On August 28th 1889 he was married, at Throckley Wesleyan Church, to Annie Jane Jordon of Heddon.

Harry was a life-long abstainer  and took an active interest in the Band of Hope. He was a mainstay of Heddon's Methodist movement, Sunday School teacher and superintendent of the church. In 1881 he became a local preacher and later chapel steward and a trustee. He  was for a time, secretary and delegate of the Heddon Branch of the Northumberland Miners Association, was elected to the Parish Council in 1894 and supported the Liberal MP, Charles Fenwick as secretary of the Heddon Liberal Association. Thomas Henry Jackson died on 18th Nov 1929 aged 71 and is buried with his wife in Heddon Churchyard [75].

In 1907-08 the original entrance porch of the Methodist Chapel was moved from the centre of the south wall and rebuilt on to the west end, and a schoolroom (the present Sunday School) was built on to the south wall. Joyce Snowden, the youngest daughter of John Snowden, together with Ada Jackson, Evelyn Anderson and Maggie Snowden, layed some of the new foundation stones. At that time, the total number of inhabitants of houses in and around the Chapel was under 100, and quite a number lived in 'The Square'.

A new pulpit was designed by the Rev. W. Hayes and an electric organ was installed in 1960.

The garden was redesigned and the old out-house rebuilt for use as an additional fellowship room. 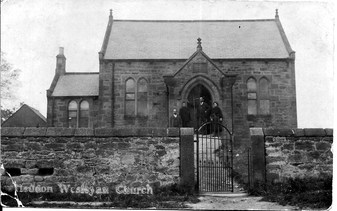 In about 1994, it was decided to make substantial alterations to the old Victorian building in order that more room could be provided for social gatherings. The old vestry was demolished and modern amenities of kitchen, two toilets and a room overlooking the rear garden were added. The garden at the rear  was created from waste land by one of the Chapel members and dedicated by Rev. Linda Williams in may 1989. It won the 'Northumbria in Bloom' trophy for the best garden of a religious establishment for three years.

Although church membership has declined throughout the country and many country chapels are now disused, the small congregation at Heddon continue to meet each Sunday for morning and evening worship in addition to the weekly prayer meeting and bible study. In 1999, there were 18 young children attending Sunday School.

Details of the services can be found here.
© Copyright Martin Luff and licensed for reuse under this Creative Commons Licence