Rudchester township
based on an article by V.L.B. in 'Vision'

Rudchester is about one and a quarter miles from Heddon, situated at the first cross roads on the Military Road. John Collingwood Bruce writing in his 'Handbook to the Roman Wall' in 1863:

"When the Pretender's forces appeared before Carlisle in 1745, the Royal Troops were lying at Newcastle, where the enemy had been expected. At that time, no road that could bear the transit of artillery existed between Newcastle and Carlisle, so that General Wade was obliged to leave Carlisle to the mercy of the enemy, and proceed in search of them by a southerly route. After this the road between Newcastle and Carlisle, now known throughout the district as 'The Military Road' or the 'West Turnpike' was made. For miles together the Wall was pulled down to form it. Formerly the facing stones were in many places seen protruding through the metal; but in part they have been removed to supply material for mending the turnpike, and for the rest they have been hidden by the covering of tarmacadam".

The antiquarian, William Stukeley, wrote at the time that an Act of Parliament allowed Wade to "....demolish the Wall and beat the stone into pieces, to make the road withal. Every carving, inscription, altar, milestone, pillar, etc. undergoes the same vile havoc from the hands of these wretches".

John Wesley writes on May 21st 1755, "I preached at Nafferton near Horsley, about thirteen miles from Newcastle. We rode chiefly on the new western road, which lies on the old Roman Wall".

The fact that this road is on the Roman Wall accounts for its straightness.

Having thus digressed, I return to Rudchester, and for information, to Paul Brown's Friday Books of North Country Sketches (a selection of 'Friday Articles' from the 'Newcastle Journal' published from 1934) , although I have a certain amount of personal knowledge having lived there for close upon 26 years.

Rudchester means 'Red Camp' and there is a reason for its name. It stands, in fact, upon the site of Vindobala, one of the Wall forts, and when in 1924 part of that fort was excavated it was found that many stones had been turned red by burning. Here was evidence of a tragedy long before the first of the Rudchesters built his tower out of the ruins.

The present Rudchester Manor is to all outward appearance 18th century, but mixed up in the building are parts of the ancient tower, and strangely enough a Saxon window was discovered not very long ago; it had been built up and its discovery came as a great surprise. How had it come to be incorporated in a tower erected in the late 13th century?

The site of the fort of Vindobala lies north of the house, which stands therefore within what was the civil settlement in Roman times.

There have been many finds in the fort itself - altars, statuary, pottery, coins, etc., including an altar which Lucius Sentius Castus, a centurion of the 6th legion, dedicated to Mithras and, departing this life, left the ornately-carved stone to be discovered by inquisitive people some fifteen hundred years later. I was instrumental in 1953 in initiating the excavation of the temple of Mithras, thanks to the co-operation of Mr. J.P. Gillam and others interested in work of this nature.

Those who undertook this work were fortunate in the fact that when found (in 1844), the position of the altar was marked on the Ordnance Survey Map produced in 1919. It was at this spot that the first trial trench was dug, but without success, a second trench was then tried a short distance away and some stonework was encountered which turned out to be the face of the north bench of the temple.

If my memory serves me aright, this is the third Mithras Temple to be found on the site of the Roman Wall, the other two being at Housesteads and Carrawburgh, both of which are kept open for inspection, whilst that at Rudchester has been filled in again. One must remember that stonework deteriorates if exposed to the weather, and is also disturbed by people walking about on it, so most of the excavation work done today after it has been photographed and recorded is once more covered up in order that it may be preserved.

A full-sized reproduction of the interior of the Temple of Mithras, discovered at Carrawburgh in 1950,complete with a tape recording which gives a detailed commentary on the temple, is on view at the Museum of Antiquities at Newcastle University (now the Great North Museum).

The items found at Rudchester are on display there, including the so-called 'thurible' or flat-bottomed vessel with elliptical holes in its side. No similar vessel has ever before been found. A visit to this collection of prehistoric, Roman and Anglo-Saxon antiquities is most rewarding, and of interest to all whatever their age.

In what was once an orchard west of Rudchester Manor is to be found what is often referred to as the 'Giant's Grave'. This is a cistern or tank carved out of the solid rock, which was discovered in 1766. It is of considerable size, being 12 feet long, 5 feet wide and 2 feet deep, and must have taken quite some time to fashion with the tools available in those days. It has a groove cut in its base, terminating in a hole to let out whatever liquid it was made to contain, which can be plugged in the same way as one plugs the waste hole of a bath today. See some photos on the Rudchester website.

It is not known what this large trough was used for; one suggestion is the making of mead, which is a fermented liquor made from heather honey, water and spices. If this was the case, I can only think that the Romans were a thirsty lot!

It was to Rudchester that William Hutton came one day more than a hundred years ago, and met with such a poor reception that he wrote the following in his records of his visit to these parts:-

"I saw old Sir at dinner sit,
Who ne'er said "Stranger, take a bit",
Yet might, although a poet said it
have saved his beef and raised his credit."
That may have been the state of things in those days, but I know your reception would be very different today, and whilst I don't want to embarrass the present occupiers, an arranged visit could be most rewarding. As one enters the house by the front door, the room on the right possesses a big fireplace and oak-beamed ceiling. The room on the other side of this doorway is the drawing room, and contains an interesting fireplace adorned with sculptured ornament. This room is in the oldest part of the house, a portion indeed of the medieval tower. The walls here are of great thickness and it was in this part of the building that the little Saxon window was discovered.

The whole site of the Roman Camp has not yet been excavated and none of it which lies north of the Military Road. I hope some day this work will be done as one never knows what of interest might be found. 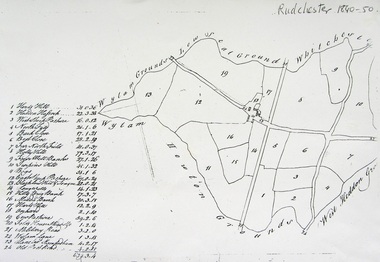 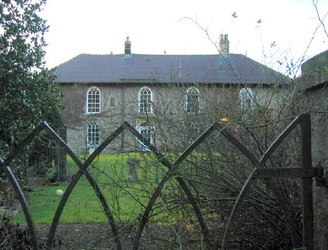 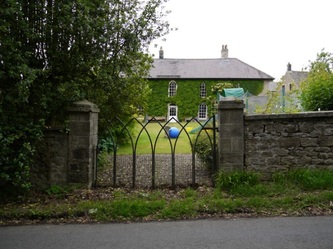 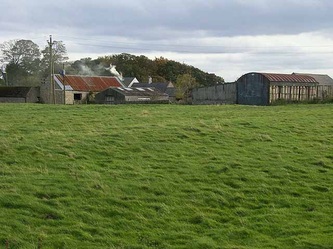 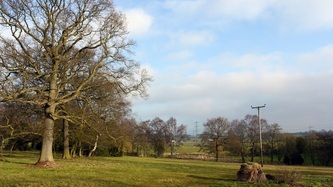 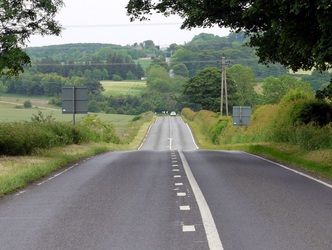 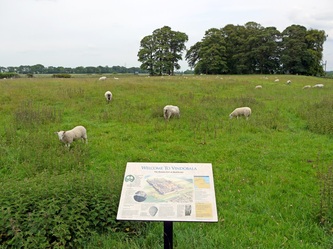 The earliest part of the manor house is a 13th century Pele tower set within its south-east corner. Evidence for the date of the tower is restricted to historical references which suggest there was a hall built on the site around 1285. The only remaining medieval window within the tower, however, contains a cusped ogee header indicative of the 14th century. This may of course be a later insertion. The tower has been largely modified to accommodate the 18th century manor house which has resulted in many of the original openings and features being removed or replaced.

The manor house appears from the outset as a comfortable late 18th century residence and displays many features of the period including the gothic windows, Tudor arched doorway, plan form, symmetry and overall construction methods. This likely construction date would correlate with other historical developments at the end of the 18th century including the Rudchester Manor House and Barn: Historic Building Report © AOC Archaeology 2009 | PAGE 15 OF 25 | www.aocarchaeology.com discovery of many Roman artefacts suggesting some groundwork and construction was being carried out. The Military Road was constructed in 1752 which would have allowed increased accessibility to the property as it operated as a gentleman’s home. The site was bought by Aysgarth Fawkes in the later 18th century and remained under the Fawkes family ownership until it was sold again in the early 19th century to William James. It remained with the James family for the majority of the 19th and 20th centuries. It was one of these major families who were responsible for the construction of the manor house and associated farm buildings including the barn.

The barn to the north-west of Rudchester Manor, like the majority of the buildings at Rudchester, was probably built of stone from the Roman ruins that once dominated the area. In particular, the large dressed stone blocks set against the centre of the east elevation at ground floor level seem to date from this period with evidence of tooling to the western face of the stones. The stones have been re-used in this area of the barn in order to hold a hopper which has since been removed. The stones were probably set in this location in the late 19th and early 20th century. The Roman Mithraeum was discovered in 1844 and stones from that site were used in the fireplace of the manor house. It is likely that such large stones came from the same area if not from the fort itself.