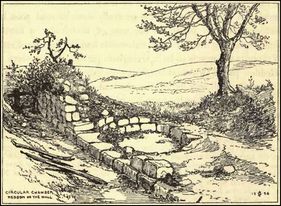 Circular Chamber in Roman Wall, near Heddon (CJ Spence)
ON June the 19th, the Society visited the village of Heddon-on-the-Wall, seven miles to the west of Newcastle, in the course of the first country meeting held in 1885.

Our country meetings should, it is believed, not only afford pleasant excursions to those taking part in them, and opportunities for examining places of archaeological interest with all the advantages resulting from the concentration of kindred eyes and minds, but should further aim at revivifying the study of local history among the people of the districts visited, and by incorporating in the publications of the Society all the information contributed or elicited, do something, in howsoever piecemeal a fashion, towards the completion or the revision of our great County Histories. If that information be not as systematic and definite as is to be desired, that surely forms no reason for withholding it altogether. It is on these considerations that the following notes on the parish and church of Heddon have been hastily collected, as a supplement to the report of the Society's visit already issued [1].

The hill on which Heddon Church stands, in the centre of the village, and the steep mound known as Heddon Law in the north-east corner of the parish, are two natural strongholds that must have been occupied at a very early period. Each rises to about 500 feet above the sea-level. From Heddon Law the view is uninterrupted right away north to Simonside, and the weird Scots pines growing on it form so distinctive a landmark far out at sea that Government is said to have interfered for their preservation. In the Great Rebellion, the Scotch army fixed their headquarters at Heddon Law previous to the battle at Newburn, and round it a volunteer camp was formed during
the scare of an invasion of England by the first Napoleon. The Church Hill is sheltered from the west by the slightly higher range of Heddon Common, with its stone quarries; but a central mound, rising on a high plateau that falls on several sides into a natural trench where huts and hovels might be grouped in safety and commanding the whole Tyne valley from Gateshead to Prudhoe, was a position of the first importance in primaeval warfare. Traces of hut-circles were to be seen on Heddon Common and on the Resting Hill, near the head of the lane leading from the railway station.

The jurisdiction of the Corporation of Newcastle over the Tyne as far as the Hedwin Streams may be supposed to have had its origin in times when the river was navigable, at least for small craft, up to that point ; and the gradual silting up of the lower reaches, which in the twelfth century doubtless took the trade of Newburn till then the great shipping place on the Tyne down to Newcastle, may at an earlier date account for the rise of Newburn. [18] Moreover, when, on the Roman evacuation, the Aelian Bridge was broken down, such traffic as there was must have been diverted to Stannerford, near Close House, in those days the first safe ford up the river, and travellers north, after crossing it, would come to the Wall ("Ad Murum") at Heddon.

At Heddon, then, in A.D. 653, both Peada, prince of the Middle Angles, and Sigebert, King of the East Saxons, were baptised, with their followers, by Finan, bishop of Lindisfarne, at the court of King Oswy; and hence they took home with them to Repton and to Tilbury the missionaries who formed the germs of the present dioceses of Lichfield and London. [19]

The fact that Heddon Church was once, if it is not now, dedicated to St. Andrew [20] is some proof of its high antiquity. St. Gregory was still only Abbot of the Monastery of St. Andrew in Rome, which he had founded, when the angelic countenances of the fair-haired young Angles in the slave market riveted his attention, and caused him to
proclaim that Deira was to be rescued from the wrath of God, and Alleluia chanted in the realm of King Aella. Augustine when he set out on his mission was prior of that same monastery. St. Andrew may, then, in no legendary sense, have been regarded as the Apostle of Britain. When SS. Peter and Paul had been honoured in the dedication of the metropolitan church of Canterbury, the second cathedral founded by Gregory's missionaries, that of Rochester, was inscribed to St. Andrew; and when, a century later, Wilfrid, on his return from Rome, built at Hexham the church that surpassed in splendour all others north of the Alps, he placed it under the especial patronage of that saint. The numerous churches on the Tyne dedicated to St. Andrew may be supposed to have been founded before the destruction of Hexham in the ninth century. As soon as St. Andrew was adopted as the national saint of Scotland (so much of which formed part of the Great Northumberland) his popularity south of the Border must have waned. Heddon is at present assigned to St. Philip and St. James, [21] and although they were, as at Rock and "Whittonstall, probably substituted on the revival of interest in such matters through ignorance of the original patron, it is curious that the orientation the whole church pointing almost due north-east agrees with May Day, their festival. [22]

Next
9 Hodgson's Northumberland, III., i., p. 115.
10 Cf. Oswestry, i.e. Oswaldestre. Just over the Cumbrian Border we have Birdoswald, a Celticized form of 'Oswaldesburh." Possibly the placenames " Edwinestre," and Birdoswald mark the limits of the English Pale under Edwin and Oswald.
11 "Quod dominus rex habebit totum portum maris a mari usque ad locum qui dicitur Hidewinestremes." Hodgs. A'orthd., III., ii., p.348.
12 The expression "terra de Edenstrem (?)" in the grant of Reginald de Kenebell quoted postea p. 246 n. 27, considerably strengthens the surmise that it is "Hedwinestremes," which is the corruption.
13 Yevering Bell.
14 Edinburgh.
15 Bede, Eccles. Hist., bk. Ill, c. 22.
16 Bede, Eccles. Hist., bk. I., c. 12.
17 Owing to erroneous measurement or fanciful etymology, "Ad Murum " has been placed at Pandon, Benwell, Walbottle, and Welton. Surely the non plus ultra has been reached in the tradition (?) that Paulinus baptised Egbert in the King's Well at Walltown, near Haltwhistle! Proceedings Soc. Ant. Newc., Vol. 1. (N.S.), P- 160. Mr. Longstaffe's identification of Rudchester with "Ad Murum" (Aroh.Ael., Vol. IV., N.S., p. 56) is not happy, resting, as it does, on the supposition that Bede's miles were of quite arbitrary length, to say nothing of the extreme improbability of an English king fixing on a 'Chester' for his "villa", which would require a site of greater natural strength. "Ad Murum" was obviously a point of strategic importance, and a church might be expected to mark the scene of so great an event in the history of the Conversion of England.
18 Newburn (Nyweburne), i.e. the Newlurh. Cheeseburn. near Stamfordham,ilearly a corruption of "Cheseburgh ;" and we find Simonburn called in early "Symondbury;" Brinkburn, "Brincaburch," Sockburn "Sochasburg," &c.
19 Bede, Eccles. Hist., bk. III., c. 22.
20 See Carta Walteri de Bolebec de advocatione Ecclesie de Hedone" postea p. 246 n, 25.
21 In Ecton's Thesaurus Rervm Eccles., p. 756, we find Heddon entered as "Hedwallen, Vic. S. Andr.." so that the change to SS. Philip and James has been made since its publication in 1742. By what ecclesiastical process are the intruders to be ejected, and St. Andrew reinstated as rightful patron?
22 The day of the old Village Feast has been forgotten. What survives of Heddon Hopping is now held on the Monday of the first whole week after the Midsummer Fair at Stagshawbank, for the very practical reason that the showmen, &c., used to be returning from the fair at that time. Newburn Hopping comes a week after Heddon, that at Lemington a week after Newburn, and so the company made their way to the Lammas Fair at Newcastle.