The Roman Wall Forge founded by Harry Amos in 1886 and run by four generations of the family has finally closed because of falling business. The forge was currently run by the brothers Charlton and Ridley Amos, aged 65 and 63, who say that work had dried up in the last few years. At its peak, the forge employed 24 people and undertook large and complex projects. 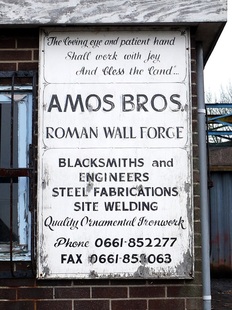 Fitting motto to the much admired skilled 'forgers' of Amos Bros. Photo A. Curtis (2011)
“Even in recent times, Amos Bros did work on the Tyneside Metro system, the Metrocentre, Kielder Reservoir and, 10 years ago, the wrought-ironwork at Alnwick Garden,” said Ridley.

“We’ve done fantastic work in the past, but it’s all gone now. It’s partly due to the change in the traditional methods, but also the recession. The builders just don’t have any work these days. We were just living on the farmers and small repairs, and we couldn’t keep going on that.”

“We are saddened – Charlton and I are ready to retire but Charlton’s son Michael would have taken over the business and carried it into the fifth generation of the Amos family.

“However, it is not to be. We have ceased trading and have auctioned off the firm’s goods. It is the end of an era.”

The single-storey smithy next door to the Swan Inn on Towne Gate was the original forge used by the Amos family until they moved to new premises north-east of the Library in 1971. The floor of the old forge was originally the sandstone rock which here outcrops at the surface and is visible in front of the building. Outside, set in the ground, is a large circular metal plate used by the blacksmiths to fit the metal outer hoops to the wheels of horse-drawn coaches and carts. The forge became incorporated into the restaurant of the Swan, with period features including farm implements and a large log-burning fireplace. See the article here. 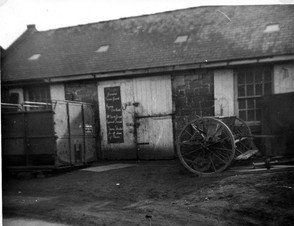 Amos smithy before it was incorporated into the Swan c1970.
The forge situated above the library – valued at £300,000 – has been sold to a young professional couple who now plan to demolish it and build a private home in its place.
See the full article including many photos on the Journal Live website.
Click photos above for links to Geograph and full details. They are © copyright and licensed for reuse under this Creative Commons Licence

But when that business exemplifies traditional skills, and has been going for more than a century, the loss is felt all the more deeply. The Roman Wall Forge in Heddon-on-the-Wall has been passed through several generations of the Amos family, at one point employing 24 people and leading high profile jobs throughout the region. Sadly, though, the forge has become another victim of the recession, and brothers Charlton and Ridley Amos felt they had no choice but to call it a day.

“A lot of people seemed to think we could just keep going on forever, but of course that couldn’t happen,” explained Ridley. “Our customers seemed to be disappearing. Some are going out of business and we just weren’t getting any inquiries from our main customers; the really big builders. Of course, if they don’t get the enquiries themselves, then neither do we. It has a knock-on effect.”

The business was established around 1880 by the brothers’ grandfather, Henry Stephenson Amos, and started its life at The Swan pub. Henry’s son, Charlton, then took over before handing over the reins to his sons, Charlton and Ridley, in 1971, around the time the forge was moved to its current site, behind the village school.

“It was definitely a crucial industry back then,” Ridley said. “The farmers were good customers in those days as they had none of the modern machinery or technology required for repairing their own machines. In modern times, farmers now have their own workshops and will go on courses about welding and things like that. They would only come to us when they really had a major breakdown.”

It wasn’t just farmers, though, who provided substantial work to the brothers.

The Duchess of Northumberland, no less, was among those to get in touch, when the gates at the Alnwick Garden needed fixing after someone drove a car into them. Ridley later wrote to her to see if any further work was required and, knowing the standard of the Amos brothers’ work, she asked them to design and produce the gates to the Poison Garden.

“You’ve got to be creative and use your imagination with this job, but the Duchess was very good,” Ridley reflected. “She wanted them to look scary, so she asked me to put a snake and a spider among the gates, to make sure they would scare the children!”

While the 70s brought their rewards, however, the 80s were the golden age for the business. It was then that the brothers were involved in everything from the construction of the MetroCentre in Gateshead to the Kielder Reservoir and the Tyneside Metro system.

“We had another factory in Newcastle just for that,” Ridley said. “We had 24 men back then.”

The business also led the construction and renovation of bridges around the city, including the Redheugh Bridge.

“It was really good fun back then – a laugh a minute every day, in fact,” Ridley said. “There was great camaraderie, working with so many people. Everyone pulled together and we had some lovely chaps working for us. That seems to have gone and all you hear about is doom and gloom now.”

Indeed, around three years ago, the big jobs came to a sudden stop, with requests from the general public – gates and railings mainly – becoming “few and far between”. Ridley and Charlton, who employed two other people, had been through recessions in the past and were hopeful of things picking up – but alas this didn’t happen. The brothers – Ridley is 63 and Charlton 65 – would have been thinking about retirement soon anyway, and are happy to take it easy and immerse themselves in new hobbies. Their sons, Craig and Michael respectively, however, will now have to find new paths for themselves, rather than enter into the family business.

The Roman Wall Forge, so well known and respected in Heddon, has been sold to a young professional couple, who plan to demolish it and build a home in its place. The machinery that has served both the local community and the wider region so well was put up for auction, with those technologically advanced farmers snapping up most of it.

It’s a sad tale, but one that’s becoming increasing common for small blacksmiths throughout Britain, according to Ridley.

“I hope it doesn’t continue to die out,” he said. “I’ve got a few friends who are still doing it, and bringing young men on with them. There are also Government courses to encourage youngsters to get into it. It’s dependent on the customers but it would be a total disaster if it was to go.”